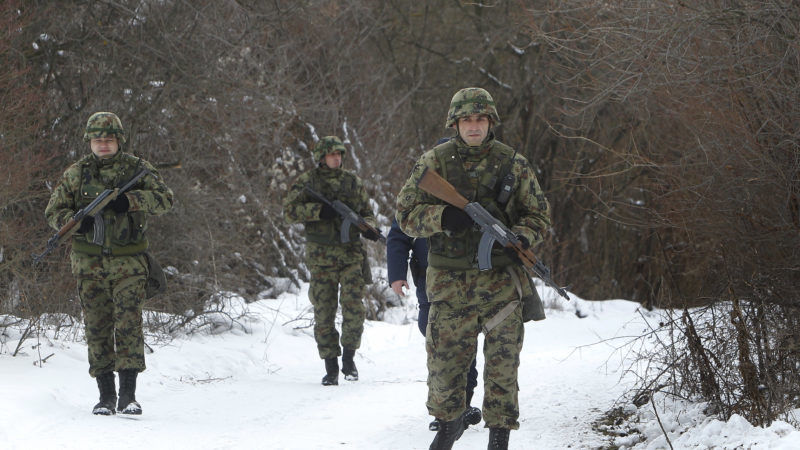 Members of Serbian Army patrol the border between Serbia and Bulgaria trying to stop the illegal entrance of migrants. Dimitrovgrad, 13 January. [Djordje Savic/EPA]

A report by a German think tank reveals the deficiencies of the deal with Turkey to stem the flow of refugees to Europe. Migration is on the menu of the two-day summit starting today (22 June).

Migration will be discussed on Friday (23 June), the second day of the summit. According to diplomats decisions are not expected at this stage, but a frank discussion “on the external aspects” is very likely to take place.

On Wednesday (21 June), the Friedrich Ebert Stiftung released a 26-page report, pointing out at the fragility of the situation since the EU-Turkey deal, which in theory closed the Western Balkans route.

In reality, the report says that the migrants’ route was diverted, with the southern entry point shifting from the Greek islands to Bulgaria’s land border with Turkey. With the Western Balkans route, migrants got stranded in Serbia, while with the diverted route, they remain stranded in Bulgaria, as all the countries further West are securing their borders and pushing back the refugees, the report says.

Apart from Greece, as of the end of 2016, Serbia and Bulgaria are the countries with the highest number of stranded asylum seekers: 6,232 in Serbia and 5,534 in Bulgaria.

As a result, Bulgaria and non-EU member states Macedonia and Serbia find themselves “caught in the middle” with migrants who in fact don’t want to stay there.

Future developments depend on the fate of the EU-Turkey deal, the report says. Faced with the massive arrival of refugees, it is questionable whether the mechanisms and structures to violently push back asylum seekers currently in place along the entirety of the Balkans route will hold, the report says.

The Associated Press reported last Monday that at a meeting in Prague, defence officials of six Central European countries and the Balkans have pledged close cooperation in tackling migration with all possible means including the use of armed forces.

The countries – Austria, Croatia, the Czech Republic, Hungary, Slovakia and Slovenia – are reported to have created a grouping called the Central European Defence Cooperation and want to be a role model for the entire European Union.

Among the group’s goals is that refugees who want to apply for asylum in EU countries have to do it in centres outside the bloc.

Austrian Defense Minister Hans-Peter Doskozil is quoted as saying after the meeting that his country has been preparing a detailed action plan of cooperation for the six whose military forces will train in a joint drill in next few months.