File photo. Sub-Saharan African migrants who were aboard a 15-metre boat that left Misurata, Libya, four days ago are guarded as they arrive in the harbour of the Italian island of Lampedusa, on 15 April 2011. [Carlo Ferraro/EPA/EFE]

Europe’s coast guards and rescue agencies were at loggerheads Monday (13 April) about the fate of four dinghies and up to 85 migrants potentially lost at sea after setting off from Libya.

Germany’s Sea-Watch International reported that the little rubber boats had been carrying 258 people.

It said it had lost contact with one carrying 85 people somewhere between the territorial waters of Libya and Malta.

The UN refugee agency told AFP on Sunday it was “very worried” about the fate of those on board. 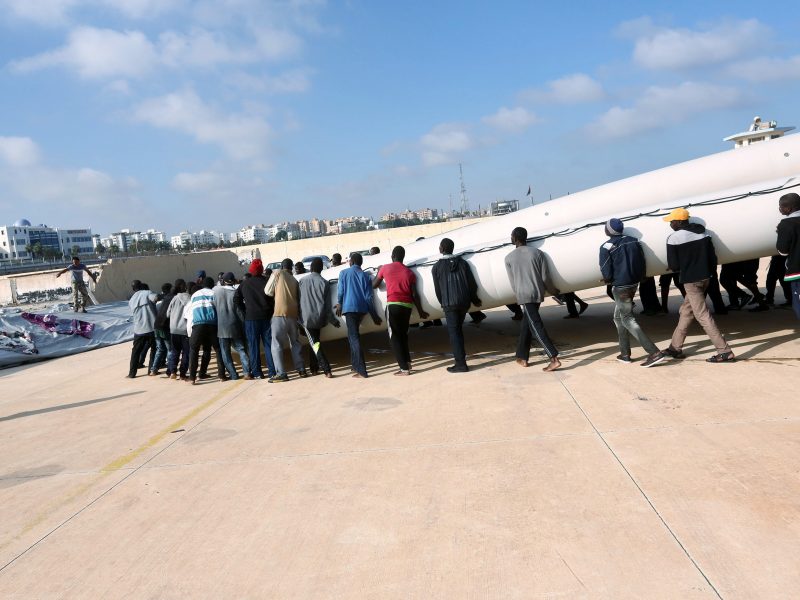 Europe’s coast guard service Frontex confirmed to AFP on Sunday that it was also looking for one of the four boats.

But on Monday Frontex told AFP that “all four boasts have been accounted for” and there had been no shipwreck in the Mediterranean.

“Two arrived in Sicily and two remain in the Maltese search and rescue area,” Frontex said.

Latest on #migration saga in the Med: All 4 boats accounted for; No shipwreck- #Frontex | #Maltese ambassador to #Libya accusest #AlarmPhone of maintain regular contact with those who use human trafficking services, accuses it of… https://t.co/yLP6iK7qUk pic.twitter.com/1jTVa7BTMJ

A “Frontex airplane based in Malta is currently on patrol to make sure that no other vessels in distress are in the area,” it added.

But Sea-Watch International stood by its report.

“For days, at least 3 boats with more than 150 people are in distress in the Mediterranean Sea, a fourth sunk already,” the German group said on Twitter on Monday.

The Spanish rescue agency Salvamento Maritimo Humanitario said the migrants it had been in contact with came from sub-Saharan African countries.

Frontex explained that there was a separate “deflated rubber boat in the Libyan search and rescue area”.

Italian authorities “later confirmed that this boat correlated with an old incident, where the migrants were rescued and the rubber boat was left adrift empty”, Frontex said.

Italy’s coast guards on Monday said that Libyan authorities had “in recent days” conducted their own search and rescue mission.

The Libyans had “subsequently left the boat drifting empty, rescuing the migrants who were on board,” the Italian coast guards said.

Italy has long established itself as the primary European port of entry for migrants seeking refuge from Africa and the Middle East.

But the Mediterranean country shut down its ports and said it would quarantine any illegal migrants because of the coronavirus pandemic.

Malta has also closed its ports to migrants because of COVID-19.

“The allegations … come in the midst of the COVID-19 pandemic crisis, which has exacerbated the long-standing impasse which has governed migration within the European Union since as far back as 2008,” Maltese Foreign Minister Evarist Bartolo wrote.