"We must fight against abuses and frauds, and tighten the criteria where necessary," said French Prime Minister Edouard Philippe.

The boat had spent six days anchored off Lampedusa before a local prosecutor ordered their disembarkment amid a probe of far-right Interior Minister Matteo Salvini for forbidding their entry to port.

Many of them had spent 19 days on board the ship after being picked up while in difficulty trying to make the perilous journey from Libya to Europe in small boats.

As they walked down the gang plank one by one to the island’s shore, some could be seen limping or in bandages.

Salvini, who may be out of a job on Wednesday after Prime Minister Giuseppe Conte resigned in protest at the League leader’s bid to bring the government down, has forbidden all NGO rescue boats from entering Italian ports.

“After 19 days, we will land in Lampedusa today. The boat will be temporarily seized, but it is a cost that Open Arms assumes to ensure that people on board can be taken care of,” tweeted founder of Spanish charity Proactiva Open Arms, Oscar Camps.

After an inspection by judicial police and doctors, prosecutor Luigi Patronaggio ordered the migrants be disembarked on the small island of Lampedusa due to tensions onboard.

Fifteen migrants, some without lifejackets, jumped into the sea earlier on Tuesday in an attempt to swim to Lampedusa.

Spain sent a naval vessel to pick-up the migrants, after the long wait onboard had led to fights and suicide threats as tempers frayed.

The charity warned the situation was “out of control,” with many of the migrants suffering post-traumatic stress.

Prosecutor Patronaggio intervened as part of a probe into alleged kidnapping and refusing to obey orders targeting Salvini.

Salvini hit back on Facebook about the decision to let the migrants off the boat, saying: “If anybody thinks they can scare me with the umpteenth complaint and wants a trial, they’re mistaken.”

There were initially 147 mainly African migrants on the ship but as the days passed, some were evacuated for medical care and all minors were allowed to disembark.

Six European Union countries – France, Germany, Romania, Portugal, Spain and Luxembourg – have offered to take them all in.

A ‘coalition of the willing’ of six EU member states have agreed to take some of the 147 migrants stranded on a rescue ship near the Italian island of Lampedusa, Rome announced Thursday (15 August), amid an immigration row between Italy’s interior minister and premier.

But Salvini still refused to allow migrant rescue vessels to dock as part of his hardline policies.

“Being firm is the only way to stop Italy from becoming Europe’s refugee camp again,” he tweeted.

A Spanish naval patrol boat, the Audaz, set off from Rota in southwestern Spain on Tuesday on a three-day trip to Lampedusa.

It would then escort the Open Arms vessel to Palma de Mallorca in Spain’s Balearic Islands, the government said in a statement.

But the Spanish government was not able to immediately say whether the ship would turn back now that the migrants had disembarked.

Spain had tried to break the standoff over the migrants at the weekend by offering up its southern port of Algeciras, which the NGO said could “not be achieved” due to the distance and tensions on board. 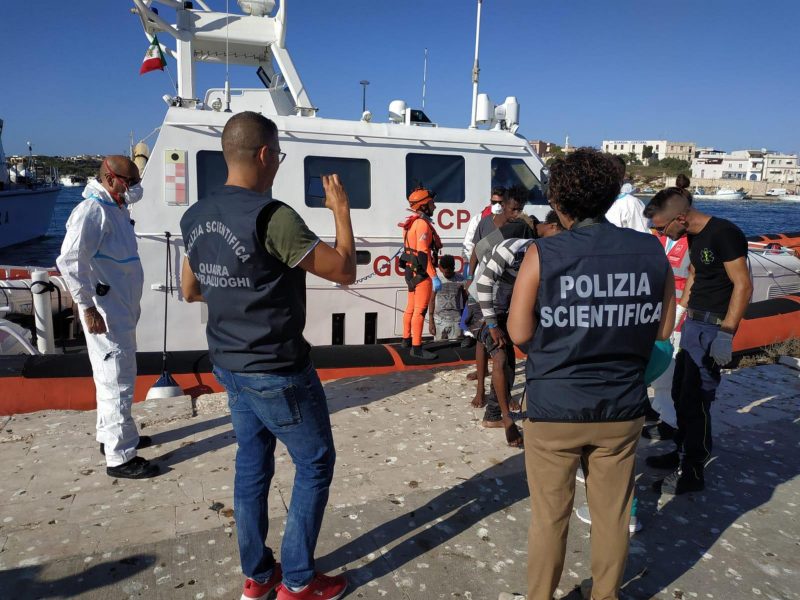 Spain on Sunday (18 August) offered to allow a charity boat situated off the coast of Italy with more than 100 people on board to dock at the nearest Spanish port after the Open Arms charity rejected a plan to dock in Algeciras because it was too far away.

Madrid then suggested Mallorca in the Balearic Islands, nearer but still around 1,000 kilometres (600 miles) from Lampedusa.

The charity described the offer as “totally incomprehensible” and continued to demand the ship be allowed to dock in Lampedusa.

“What Salvini is doing in relationship with the Open Arms is a disgrace to humanity as a whole,” she said Monday.

Salvini “has shown he doesn’t care about human lives”, she added on Tuesday.