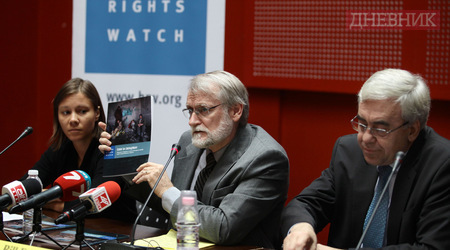 Human Rights Watch (HRW) accused Bulgaria today (29 April) of violating the rights of asylum seekers by forcing them back across its border into Turkey, sometimes violently, and failing to provide basic humanitarian assistance.

Bulgaria, which is the European Union’s poorest member state, and has struggled to cope with a large influx of refugees from Syria and elsewhere, branded the allegations as “blatant lies” and denied that its border guards were using excessive force.

The European Commission has made it plain that refugee push-backs are against EU and international law [read more].

In a scathing 76-page report which has stirred public anger in Bulgaria in favour of the refugees, HRW said Sofia had embarked on a deliberate “containment plan” to restrict the number of asylum seekers entering the Balkan country. The plan includes the building of a 33-km fence on the Turkish border.

“Bulgaria, of course, is faced with a humanitarian challenge and its capacity to meet that challenge is limited,” said Bill Frelick, director of HRW’s refugee rights programme.

“Even with limited capacity, however, shoving people back over the border is no way to respect the rights of refugees, asylum seekers, and migrants,” he added.

Bulgaria, which, together with neighbouring Greece, forms the EU’s southeastern border, saw the number of refugees on its territory jump to nearly 12,000 people last year from around 1,380 in 2012, mainly due to the civil war in Syria.

Bulgaria’s centre-right main opposition GERB party forced a no-confidence vote in the Socialist-led government in February over its handling of the refugee issue. The motion was defeated.

“Bulgaria should end summary expulsions at the Turkish border, stop the excessive use of force by border guards and improve treatment of detainees and conditions of detention in police stations and migrant detention centres,” the report said.

“The larger part of the border is equipped with cameras and everything happening there is observed and recorded. The footage can be checked and I can guarantee there is no violence,” he told reporters.

HRW said the humanitarian situation in Bulgaria had improved this year with EU help, but added that this had coincided with Sofia’s ‘containment policy’ that had led to a sharp drop in the number of new asylum seekers arriving in the country.