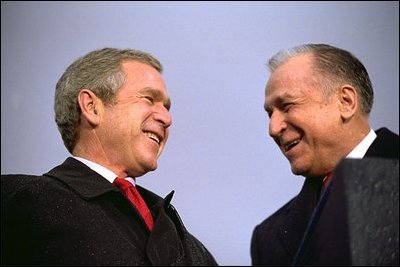 A Romanian court has begun a probe into former President Ion Iliescu for alleged crimes against humanity over the violent suppression of protests in 1990, months after the fall of the Communist regime, prosecutors said yesterday (21 October).

The 85-year-old is accused over the violent crackdown on an opposition movement that staged sit-ins blocking downtown Bucharest for several weeks in mid-1990, just six months after the fall of Nicolae Ceau?escu’s Communist government.

The ex-president spent an hour at the prosecutors’ office on Wednesday and refused to answer questions from journalists when he left.

“The violent repression of the demonstration organised at University Square killed four people and wounded some 1,000, three of them with gunfire,” prosecutors said.

Virgil Magureanu, Romania’s then-intelligence chief, told prosecutors Wednesday about his role in the incidents that cast a shadow over the country’s transition from Communism.

Iliescu is accused of bringing thousands of miners to Bucharest to add muscle to efforts to end the protests. On the day of the crackdown hundreds of people deemed “enemies of the regime”, some simply having beards or wearing jeans, were beaten as security personnel looked on.

The prosecution opened an investigation into the incident in March, after the European Court of Human Rights (ECHR) in September criticised Bucharest for failing to properly probe the violence.

“Mr Iliescu has been informed that legal proceedings have been initiated against him,” a spokesman for prosecutors told AFP.

In 2008, prosecutors decided to drop the case entirely, stating that the allegations against him were baseless.

The ECHR case was brought by the wife of a man who was killed in the crackdown with a bullet fired from the interior ministry.

It was also brought by another defendant, a man who suffered ill-treatment at the hands of policemen and men in plain clothes in the basement of a building housing the public television headquarters.

Iliescu was Romania’s first head of state after the fall of Ceau?escu, who ruled Romania with an iron fist from 1965 to 1989.

In December 1989, as Communist states crumbled across eastern and central Europe, the Ceau?escus fled massive protests in Bucharest and other cities.

They were arrested and executed on 25 December 1989, after a mock trial.

Brutally put down, the anti-Communist uprising and the ensuing violence left more than 1,000 dead.