Workers and police at the sight of the demolition of an illegally constructed home in an unauthorized camp where members of the Sinti ethnicity (Roma from Eastern Europe) live near Turin, Italy, 19 June 2018. [Alessandro di Marco/EPA/EFE]

Italy’s far-right Interior Minister Matteo Salvini on Tuesday (19 June) defended his plans to count the Roma community living in the country and deport those without legal status, despite outrage at home and abroad.

“I’m not giving up and I’m pushing ahead! The Italians and their safety first,” Salvini tweeted, after opposition MPs slammed the idea of a census as “racist” and “fascist”.

Italy’s new government plans to carry out a census of the Roma community with an eye to kicking out anyone staying in the country illegally, Salvini said on Monday on national television. 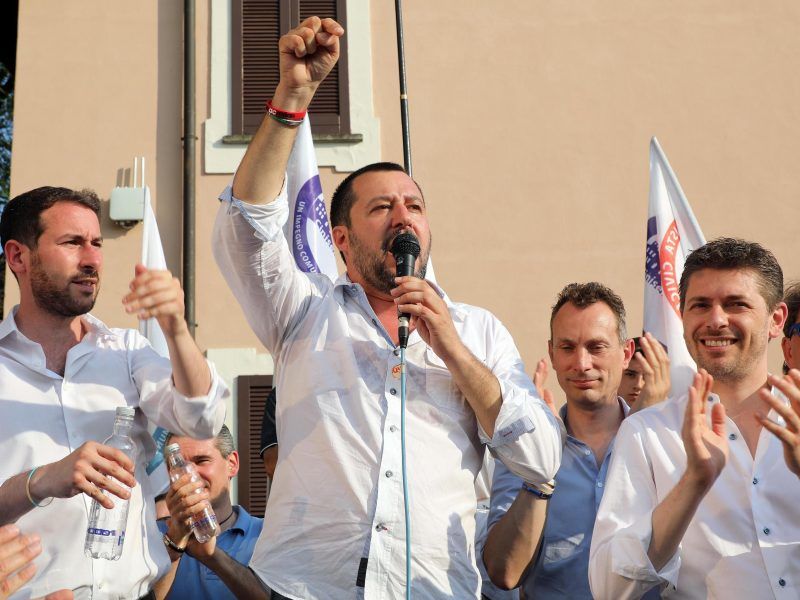 Italy’s new government plans to carry out a census of the Roma community with an eye to kicking out anyone staying in the country illegally, Interior Minister Matteo Salvini said yesterday (18 June).

A census would allow the authorities to “see who, how (they live) and how many there are,” he argued.

It would then allow the authorities to study the possibility of expelling Roma of foreign nationality without the proper documentation, he said.

Condemnation of his proposal was rapid and widespread, with not only the opposition parties but also members of the newly-established ruling coalition adding their voices.

Deputy prime minister Luigi Di Maio — leader of the anti-establishment Five Star Movement that makes up the coalition alongside Salvini’s League — said any census based on ethnicity would be “unconstitutional”.

It is the first time that Di Maio has spoken out against his coalition partner and fellow deputy prime minister Salvini since the populist new government was sworn in on 1 June.

“No one is planning to create files or conduct a census on the basis of ethnicity, which would be unconstitutional because it is clearly discriminatory,” Conte said in a statement Tuesday.

He also called for checks to ensure Roma children had access to school services, “since they are often kept out of compulsory education courses”.

The European Union also weighed in on the controversy.

Having initially attempted to avoid an answer, EU Commission spokesman Alexander Winterstein finally told journalists that “as a general rule, we cannot deport a European citizen based on ethnic criteria”.

Confronted with the backlash on Tuesday, Salvini sought to clarify his plans.

“It is not our intention to record or take anyone’s fingerprints,” he said, according to a statement from his far-right League party.

“Our goal is a recognition of the situation of Roma camps. We intend to protect thousands of children who are not allowed to attend school regularly.”

Salvini’s statements over a census of the Roma population in Italy are shameful and despicable.This man is not moving Italy forward. He is taking Italy back to 1938, when Mussolini applied racial laws.https://t.co/0NnUQFSUn6

‘Memories from 80 years ago’

Salvini's announcement of a planned Roma census drew the ire of his coalition partner the Five Star movement as well as the opposition; Jewish community leaders drew parallels with the fascist regime of Mussolini https://t.co/KZtaz5UilQ

The “announcement is worrying and evokes memories from just 80 years ago which are sadly increasingly forgotten,” said community leader, Noemi Di Segni.

Salvini already caused a diplomatic crisis with Italy’s EU partners earlier this month when he barred a charity-operated rescue ship with 630 mostly African migrants from docking.

He has also repeatedly taken aim at the Roma community, making promises to bulldoze Roma camps during his election campaign.

“Yesterday refugees, today the Roma, tomorrow guns for everyone. It must be tiring being nasty,” former premier Paolo Gentiloni tweeted on Monday.

The PD’s current leader Matteo Orfini tweeted: “If we really want to carry out the census, I would start with the census of racists and fascists. To better avoid them.”

According to a report by Association “21 Luglio,” which works with the Roma community, there are between 120,000-180,000 Roma living across Italy.

Salvini’s popularity is on the rise, nevertheless.

One opinion poll published by La7 TV channel on Monday put the League as Italy’s leading political force for the first time ever, with 29.2% support, compared with its 17% share of the vote in the March election.

The poll put Five Star narrowly in second place with 29%.

Levels of racism against Roma in Italy are absolutely extraordinary—that's the context for Salvini's fascist census idea. But they're pretty awful in the UK too. It's probably the least talked about yet most widespread form of prejudice. pic.twitter.com/HAeMiNvQa8