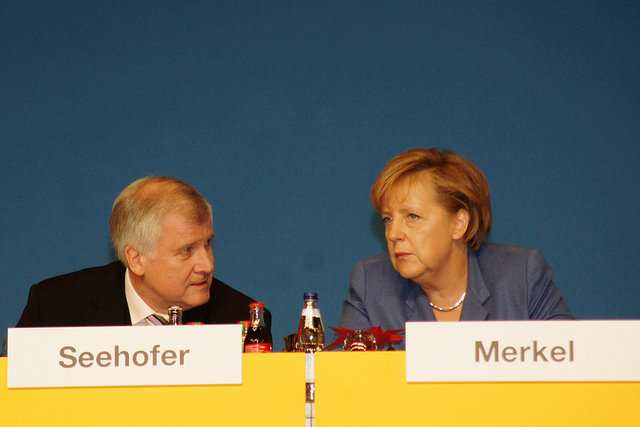 Germany has become a magnet for economic migrants and refugees from the Middle East, Asia and Africa. Berlin now expects between 800,000 and one million asylum seekers this year, twice as many as in any previous year.

The unprecedented influx has opened up divisions within the ruling coalition, with the Bavarian sister party of Merkel’s conservatives demanding tougher measures to reduce the number of new arrivals.

Merkel defended the transit zone proposal at a party event of her Christian Democrats (CDU) in the western city of Darmstadt, saying it would be better to turn away economic migrants from safe countries directly at Germany’s borders because this would speed up deportation procedures.

She failed at the weekend to win over Gabriel’s centre-left Social Democrats (SPD), junior partner in her coalition, and the row has not only rocked her government, but also provoked rare criticism of her leadership both outside and within her conservative bloc.

Gabriel accused Merkel’s Bavarian ally Horst Seehofer of making “unnecessary” demands and distracting from what he said were the “real challenges” of taking in and helping the refugees.

“In our view, the debate about so-called transit zones is a totally phoney debate,” Gabriel said after a meeting of senior Social Democrats in Berlin.

As only very few of the new arrivals come from Balkan countries that are deemed safe, such transit zones would have only a very limited impact on the total numbers, Gabriel said.

European Union rules would allow such a step only in exceptional cases for a limited time, which would further reduce the actual impact of the move, he added.

Merkel, Gabriel and Seehofer are expected to meet again on Thursday to hammer out a compromise deal, but Gabriel said he would not support an accord just for the sake of coalition harmony.

Gabriel confirmed last week he wanted to be his party’s candidate to run against Merkel for the job of chancellor in Germany’s next federal election, due in 2017.

German media billed the weekend’s fruitless coalition talks as a low point in Merkel’s third term in office. The leading business daily Handelsblatt ran a headline on its front page saying: “The refugee crisis has become a government crisis”. (Editing by Louise Ireland)