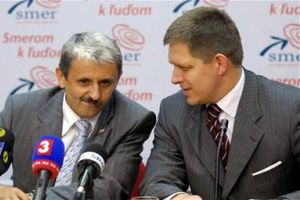 Slovak politicians head into March elections embroiled in a massive corruption probe prompted by the publication of an alleged intelligence file code-named 'Gorilla'. It suggests that members of leading political parties colluded with financiers in privatisation and public procurement projects. EURACTIV Slovakia reports.

Shortly before Christmas, a file was uploaded on a US-based server that appears to be an analytical document produced by the Slovak Intelligence Service (SIS) based on eavesdropping activities.

The authenticity of the file is now being investigated by a special commission created by the Authority for Fighting Organised Crime. Current evidence suggests much of the content is genuine.

The scandal is set to dominate a heated electoral campaign ahead of a general election on 10 March (see Background).

The 'Gorilla' file points to many cases of high-profile corruption across the political spectrum, mostly in the form of the conditions for government privatisation and public procurement programmes. Names mentioned in the context of questionable deals include former prime ministers Robert Fico, a leading member of the social democrat Smer party, and Mikuláš Dzurinda, who is from the centre-right SDKÚ-DS.

The file allegedly documents secret meetings between an associate of Slovak financial services giant Penta and various politicians or their close aides. The meetings were held in an apartment that was monitored by the intelligence services. A Slovak court has confirmed that it authorised an eavesdropping warrant with the same file number that appears on the 'Gorilla' file.

The data obtained by the intelligence agency, which in many cases indicate plans or subjective information given by the speakers, was not given to the police for investigation. This may be due to the closeness of the successive chiefs of SIS with the political parties concerned, some analysts say.

Many people – including ministers, politicians and journalists – were apparently familiar with the existence and content of the file for several years. However, it was not made public until December and has since become the subject of extensive media coverage with journalists investigating many of the suspicious operations.

An official investigation is currently under way as the file was handed over to the police by a journalist who is writing a book based on his own findings. The file was also passed on to the representation of European Commission in Slovakia and various embassies of countries whose companies were mentioned in the lengthy dossier.

The SaS party has been the most vocal critic of those involved in the scandal. The party was established three years ago, long after the events described by 'Gorilla' (2005-2006), and may emerge a political winner from the affair.

The scandal has already made its first political victim – the government dismissed the head of the National Property Fund, who is suspected of being paid huge sums by the Penta financial group. Government members of the SDKÚ-DS, the largest in the ruling coalition, voted against her dismissal. Only Prime Minister Radi?ová, who has already announced her intention to withdraw from the party and politics in general after the March elections, voted for her removal.

However, the centre-right Freedom and Solidarity party (SaS) has a scandal of its own. Defence Minister L'ubomír Galko was forced to resign when it emerged that military intelligence had wiretapped critical journalists. The transcripts of these wiretaps were subsequently leaked to the media.

In an interview with Slovak radio, Minister of the Economy and SaS party member Juraj Miškov called the scandal the worst to hit Slovak politicians in a decade. "The documents which appeared in the context of the 'Gorilla' scandal are the most appalling that the Slovak political scene has experienced since the times of Vladimir Me?iar," referring to a prime minister in the 1990s known for his authoritarian style.

An SaS party statement condemned what it sees as systemic corruption in the Slovakian political system. "The connection between the politicians and financial groups and the way how a few individuals decided the future of the state are symptomatic of a deformed politics," it says.

Former Prime Minister Mikuláš Dzurinda (SDKÚ-DS) has asked why the file was not investigated with the first evidence of wrongdoing, suggesting that the timing of the scandal is linked to the upcoming parliamentary elections. "The interior minister [investigating the scandal, Daniel Lipšic] is creating a political circus two months ahead of the elections out of a fit," he said.

Former Prime Minister Robert Fico (Social Democrats), now in the opposition, has defended his party from allegations of wrongdoing as it was out power during the years covered by the file (2005-2006).

The centre-right coalition government led by Iveta Radi?ová collapsed after some 18 months in office due to internal disputes over whether Slovakia should ratify the enhanced European Financial Stability Facility (EFSF), a rescue fund to bailout struggling eurozone economies.

The liberal Freedom and Solidarity party (SaS), the government's junior coalition partner, strongly opposes moves to bail out indebted eurozone countries. Radi?ová subsequently lost a vote of confidence tied to approving the EFSF because of the SaS's positionl.