By Zoran Radosavljevic | EURACTIV with Reuters

Demonstrators protest against the amendment of the higher education law seen by many as an action aiming at the closure of the Central European University, founded by Hungarian born American billionaire businessman George Soros, in Budapest, Hungary, 09 April 2017. [EPA/JANOS MARJAI HUNGARY OUT]

CEU’s statement is the culmination of a year-long struggle between Hungarian-born but US-based Soros, who promotes liberal causes through his charities, and the nationalist, anti-immigrant government of Prime Minister Viktor Orbán.

“CEU has been forced out,” said the institution’s president and rector, Michael Ignatieff, in a statement.

“Arbitrary eviction of a reputable university is a flagrant violation of academic freedom. It is a dark day for Europe and a dark day for Hungary,” the statement added.

In Brussels, MEP Judith Sargentini, the Greens/EFA rapporteur on the rule of law in Hungary report, called this a “dark day for Hungary and for Europe” and urged the EPP, Europe’s largest political family that is also home to Orbán’s Fidesz party, to take action.

“Forcing the Central European University to close shatters the last illusions that Hungary is anything other than an autocracy. So long as the EPP continues to keep Fidesz within their ranks, they are endorsing and supporting Orbán’s assault on the rule of law, the Dutch lawmaker said.

“This was a supposedly a red line for the EPP, now Manfred Weber must clarify how he expects to reconcile the actions of the Hungarian government with Fidesz’s role in the group.”

Weber, who is the EPP’s lead candidate to be the next European Commission president, tweeted that he was very disappointed and called on the European Court of Justice to expedite its ruling on the Hungarian education law.

Extremely dissapointed by the refusal of the Hungarian government to agree with @ceuhungary on their double degree program. It is unacceptable that a university in EU today is forced to move elsewhere with their curriculum. #CEU

Sargentini, whose report on Hungary triggered a vote in the European Parliament to start Article 7 proceedings against Budapest, called on the European Council to act.

“The rest of Europe must not just stand by as Viktor Orbán strips away at the very fabric of democracy in Hungary. The European Council must debate our recent rule of law in Hungary report, which was supported by an overwhelming majority of the European Parliament, and stand up to Orbán’s autocratic methods.”

“It is the Hungarian people who lose the most from Orbán’s ever-tightening grip on power and they look to Europe to help, which is why the Council must show that the EU is willing to stand up for European values,” Sargentini said.

CEU’s legal status has been in limbo for more than a year since changes to a higher education law that meant a foreign-registered university could no longer operate in Hungary unless it also provided courses in its home country.

Orbán’s critics say the changes deliberately target CEU, which is regularly ranked as the top university in Hungary and offers US degrees. Orbán accuses Soros of encouraging mass immigration into Europe, a charge the philanthropist denies.

CEU, founded in Budapest in 1991, has repeatedly said it has complied with all the new regulations set by Orbán’s government, which has refused to sign off on an already agreed document with the State of New York that would allow CEU to stay.

Hungary’s government has dismissed the university’s move as a “Soros-style bluff”.

CEU said it would start enrolling students for U.S. degrees at its new campus in Vienna for the next academic year. Students already enrolled will complete their studies in Budapest.

The university retains accreditation as a Hungarian university and will seek to continue teaching and research activity in Budapest as long as possible, it said. 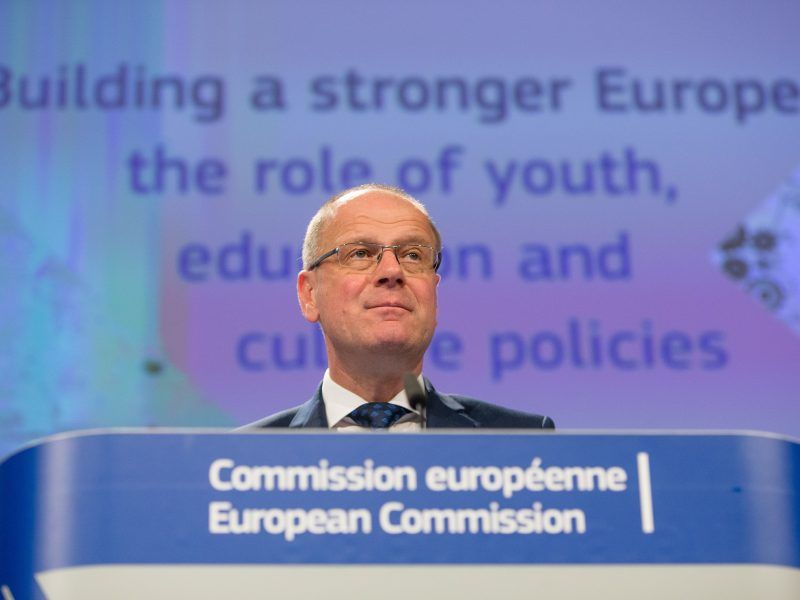 Navracsics: I am 'deeply interested' in keeping the CEU in Hungary

Viktor Orbán's offensive against the Central European University is at the core of the worsening relationship between Hungary and the EU institutions. But his man at the European Commission, Tibor Navracsics, insists that he is “deeply interested” in keeping the university in Budapest.