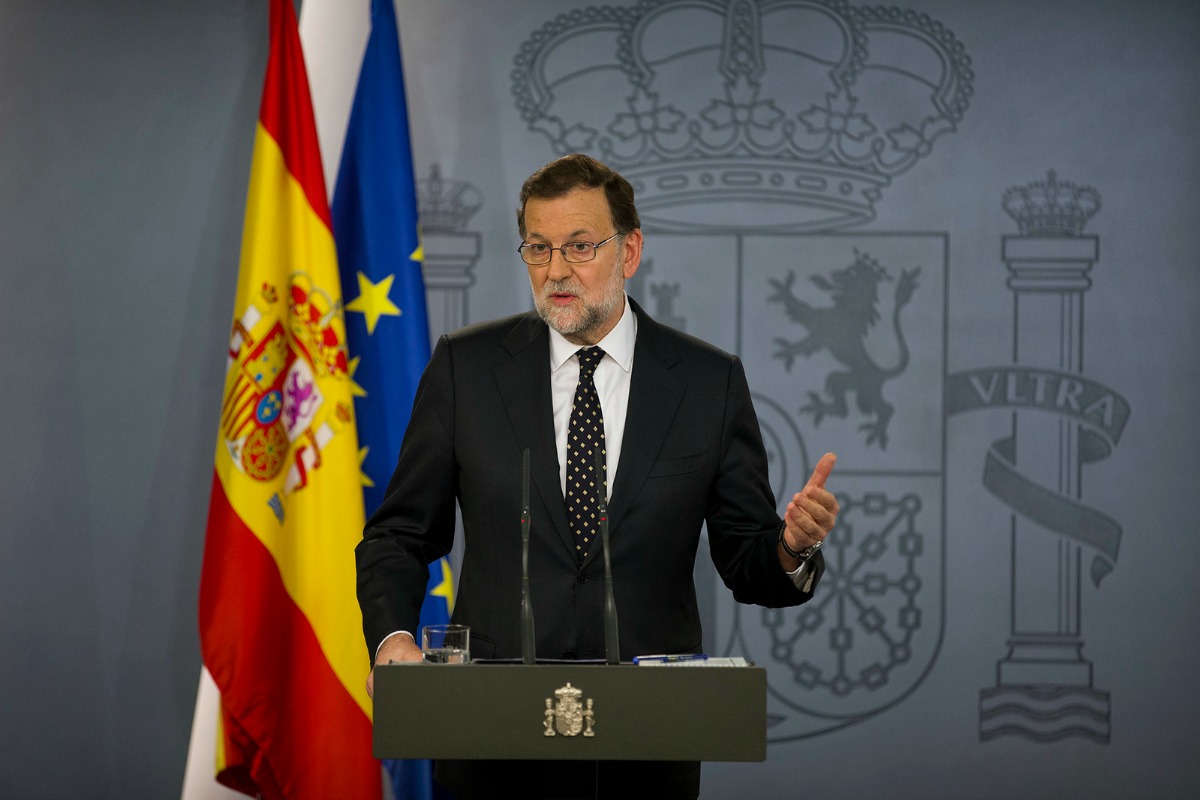 Spain and Hungary are both plagued by nepotism and a lack of transparency, whilst one ray of hope is the EU’s problem child, Greece, according to a new report by Transparency International. EURACTIV Germany reports.

According to the Corruption Perceptions Index (CPI) released by Transparency International, the EU has a lot to be proud of, particularly the public sectors of the Scandinavian member states, which rank as the most transparent and incorruptible in the world.

Half of the CPI’s top 20 countries are actually EU member states, including Denmark, Finland and Sweden. However, Berlin-based Transparency International states that a number of countries have experienced “fatal setbacks”, illustrated by the CPI which was published today (27 January).

Spain lost two points in comparison to 2014 (each country is awarded a score out of 100), dropping to 36th in the index.

Spanish newspaper El País actually conceeded two years ago that the country was “in the Champions League of corruption”. Another glance at the CPI shows that countries such as Uruguay (21st), Qatar (22nd) and Botswana (28) rank higher than Spain.

Qatar, the host of the 2022 World Cup, faced allegations of bribery and corruption that led to it being awarded the event. Construction on the country’s large infrastructure projects for the competition has resulted in over 1,000 deaths, mostly of migrant workers who live in often poor living conditions.

“Fatal setbacks” in Hungary and Poland

The CPI examined 168 countries. Its ranking was established by various expert surveys and the perceived level of corruption of politicians and institutions was drawn up.

Hungary and Poland also scored particularly poorly in the index. There, “politicians and their cronies are increasingly hijacking state institutions to shore up power,” said the report.

In Hungary, which ranked 50th with 51 points, it is not just state and executive power that is affected; freedom of the press, the justice system and civil society are also affected, said Koch. “The Hungarian government has been responsible for fatal setbacks and has leveraged power away from forces which are in place to monitor politicians and put a stop to corruption in the public sector,” she added.

A similar picture emerged in Poland, which ranked 30th, although recent legislative changes in regard to the media and judicial system are still yet to take effect and would not have been visible in Transparency International’s findings. Nevertheless, Transparency still warned that massive corruption could arise due to a weakened supervisory body. “Political developments in the country are a sad setback for Poland. Previous governments, admittedly, already exploited the media. But, recent laws are a complete turnaround,” said Koch.

In terms of EU countries, Bulgaria brings up the rear, ranking 69th. Since 2014, local government and the parliament have both tried to clean up the judiciary – to no avail.

Meanwhile, the European Commission has run out of patience, with a report published today likely to look unfavourably on Sofia, especially in regard to their Eastern European neighbours Romania. Bulgaria has actually put in place institutions that are solely dedicated to tackling corruption, but Koch said that they remain, in practice, inactive.

One of these is BORKOR, an organisation that examines complex data sets and highlights weaknesses in state institutions that are prone to corruption. To date, no such weaknesses have been identified, said Koch, adding that, “this is symptomatic of Bulgaria and its handling of corruption. There have been a lot of promises and proclamations, but so far there is little evidence of progress”.

Criticism has also come from international businesses. Many lament the lack of rule of law in the Bulgaria, and are considering to relocating to other countries.

Light at the end of the tunnel is unexpectedly provided by Greece, a country long called Europe’s problem child, and which has regularly placed last in the same index in past years.

In the most recent edition of the CPI though, Greece leapfrogged Bulgaria and Romania to rank 58th. According to Transparency, this improvement could be down to the ongoing legal proceedings launched by Athens, especially in the defence sector, which are looking for €6.8 billion in embezzled funds.

“The current government, as well as the previous one, is more committed to the fight against corruption,” Koch added. Transparency’s expert suggested that increased monitoring from international creditors could have contributed to Greece’s renewed efforts. 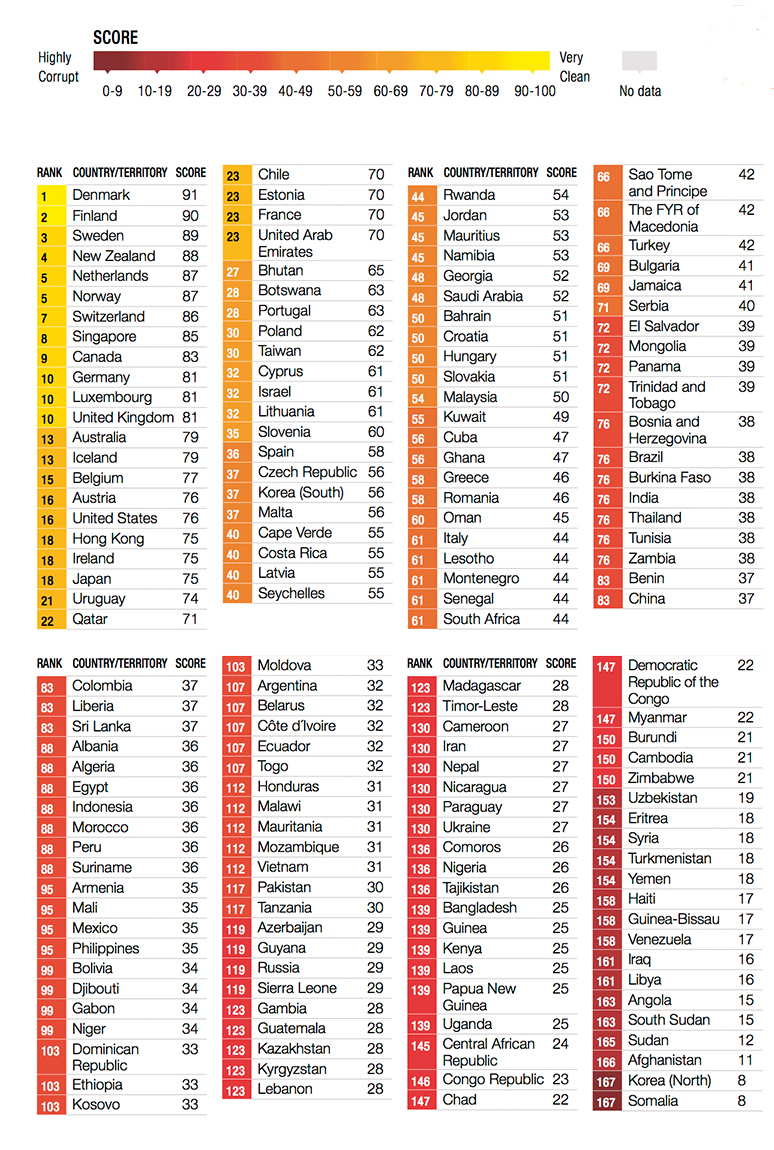 Germany also showed improvements on last year, climbing to 10th in the index.

A crucial reason for this improvement was the introduction of a grace period for government officials. According to the new measure, employees that want to take a job outside of the public sector within 18 months of leaving their post must, in the future, inform the government of their decision in writing. If Berlin decides that a new direction of employment could be a conflict of interest, then it now has the power to block the move, for up to a period of 12 months. In exceptional cases, a so-called grace period of 18 months is also an option.

The German government also adopted stricter anti-corruption rules in the health sector. Doctors, pharmacists, physiotherapists and nurses now face up to three years in prison if they are found guilty of accepting bribes.

But despite progress, there is still room for improvement for Germany, especially in the financial sector, according to Transparency. Deutsche Bank has faced its own corruption scandals in recent months, noted Anne Koch. “The German people rightly expect that the government should do more here,” she added.