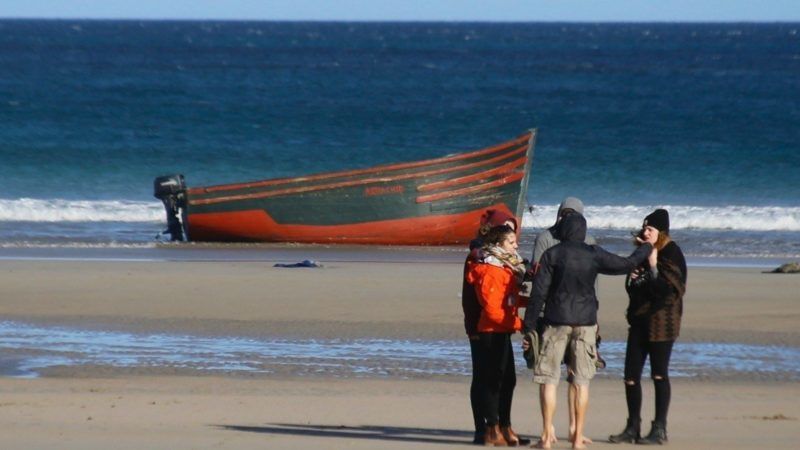 A 'patera' in the Canary Islands. [@Cahora/Twitter]

Almost a decade before the deaths of 360 people in a shipwreck near Lampedusa, Italy, shook the world’s collective conscience about migration in the Mediterranean, the Canary Islands – another southern European border – faced a similar challenge.

Barely 100 kilometers (62.1 miles) from the western coast of Africa, the Canary Islands have been dealing with irregular migration for 23 years, ever since the first “patera” (small boat) with two Sahrawi youths on board arrived in Fuerteventura in 1994.

That was just a vanguard of what was to come – initially, a few arrived each year, then dozens, hundreds, and soon thousands.

The first pateras established a route to the Canaries that over the next 11 years was used by 41,829 people, most of them Maghrebis who crossed the sea via the shortest route to the nearest islands – Lanzarote, Fuerteventura and Gran Canaria.

At the end of 2005, the first ‘cayuco’, a fishing boat common in Senegal and Mauritania for longer sailing trips, with up to 100 people on board was intercepted, and everything changed.

In 2006, 31,678 people arrived at the Canaries in 515 pateras or cayucos; numbers never before seen in the archipelago of two million residents: seven times the arrivals recorded in 2005 (4,715), and four times the number of migrants who crossed the Strait of Gibraltar (around 7,500) that year.

Factors such as the reinforced borders in Ceuta and Melilla, conflicts in several countries and the collapse of traditional fisheries that had provided a livelihood for many African communities and kept the cayucos occupied, made the Canaries a preferred route to the new “El Dorado” – a prosperous Spain with a high demand for construction workers. Spain was also a country that legalised half a million migrants in just one year and that message was heard across Africa and beyond.

In Spain, migrants earned in two weeks what they would in a year in Mali or Guinea, according to a recent report by the International Peace Institute (IPI) on the Canaries issue (New York, 2016).

Ali Ouattara, one of the thousands of Africans who risked their lives in a cayuco in 2006, spoke to EFE and corroborated the power of that message.

“You were talking to companions who were already in Spain and they told you they earned money to send home. This encourages you to risk everything,” said Ouattara, who ended up in Fuerteventura after a year on the road fleeing civil war in Ivory Coast.

However, Ouattara had a reality check the very night he boarded a cayuco with a second-hand motor, frail construction and a novice skipper, along with 37 other people near Tan-Tan, Morocco.

“On the third day, the boat had leakages. We almost lost hopes of getting out of there. When Maritime Rescue came, we were like a leaf floating in the sea. At that moment I realized the risk we had taken.”

In the years afterward, Ouattara was legally able to bring almost all of his family to Fuerteventura but was denied permission to bring his youngest child to Spain.

Desperate, he resorted to “pasadores”, or people smugglers, to bring him in through Ceuta.

The rest of the story is well-known – Ouattara is the father of Adou, an eight-year-old they tried to smuggle through the Gran Tarajal border post in a suitcase in 2015.

“I would never risk the life of a child in a cayuco, never,” said Ouattara, swearing that he did not know they would put him in a suitcase.

The Ivorian knows he was lucky – thousands of migrants like him perished in the attempt. The International Organization for Migration estimates that in 2006, the year of the cayucos crisis, some 6,000 people died at sea en route to the Canaries.

Out of every five migrants who reached the coast, one drowned at sea. Perhaps more, said Ouattara, because “the ocean swallowed many” without anyone knowing about them.

The IPI report underlined that in this drama, or rather in the response to it, lies a lesson to be learned from the Canaries case. Spain set forth rescue operations, first single-handedly with its resources, and later with the help of the European Union.

“Priority was given to guaranteeing the most basic right of these people – life,” said Juan Carlos Lorenzo, coordinator of the non-profit Spanish Commission for Refugees (CEAR) in the islands, admitting that in the help provided to migrants, “we did what we could.”

Spain received reinforcements from the EU through the border management agency, Frontex, but paradoxically decisive help came from Africa – with repatriation agreements and above all, Mauritania and Senegal agreeing to allow the Spanish Civil Guard to patrol their coasts to monitor the wave of cayucos.

“Everything changed with the involvement of these countries in the agreements to establish joint patrols and control of the mafias and migratory movements,” said lieutenant colonel of the Civil Guard, Lorenzo Barez, head of the Canary Islands Regional Coordination Center.

The center, created in 2006, is based in Las Palmas de Gran Canaria and centralizes all the intelligence information on people trafficking in the western coast of Africa.

“Externalizing” their borders, even donating maritime patrols to countries in the region, provided results for the EU in case of the Canaries, and Spain was able to convert the challenge into an opportunity to strengthen ties with West Africa, complementing agreements on migration with others on international cooperation, said Walter Kemp, author of the IPI report.

Could the same approach work in the Mediterranean? Perhaps, but CEAR said that the magnitude of what was occurring there was much greater. Moreover, IPI added another significant point – Spain had to deal with African governments in different situations, but never with failed states, as is the case of Libya today.

Barez said the large majority of people who came to the Canaries in cayucos or pateras were – and continue to be – migrants fleeing poverty, whereas in the Mediterranean there is a large proportion of people eligible for asylum or refugee status under international laws.

CEAR underlined the same aspect to also highlight what it meant to take European borders to the coasts of Africa – hindering the rights of people who could receive international protection but cannot seek asylum, having not been able to reach Spain.

Since 2008, migrants arriving in the Canaries have remained below 1,000 per year.

Fourteen patrol boats from Senegal, Mauritania and Guinea-Bissau ensure that no cayucos leave their shores, and they receive constant support from helicopters and ground staff of the Civil Guard and the Spanish police.

Currently, there are a few occurrences of pateras leaving Western Sahara.

Western Sahara, Sahrawi, refugees, and the idea of a "durable" solution https://t.co/V31AJj3EdI pic.twitter.com/J3kpfBDiFI

“The outcome is very positive, but one has to be aware that we have not stopped irregular migration, we only have it controlled,” said the Civil Guard official, showing on a map the new routes that have opened towards the Mediterranean. “When you block one route, almost always another one opens.”

However, in containing the flow of migrants, an unquestionable role has been played by another factor that nobody expected a decade ago – the economic crisis.

If the message sent by the massive regularization of migrants was at the time heard all across Africa, the message of unemployment has also spread.

“For some time now, if someone is speaking from his country to a companion in Spain, what he tells him is that he doesn’t have a job,” said Ouattara.