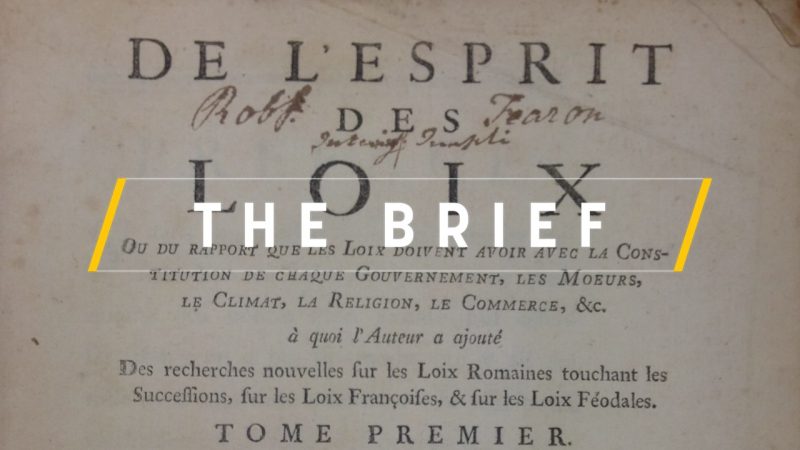 At the very heart of the European Union, another suffocating and potentially deadly virus has emerged in full light. It threatens the separation of powers as we’ve known it since Montesquieu’s De l’esprit des lois. Unless the European Union, its institutions and its political parties (at last) take decisive steps against it.

On Monday (30 March), the Hungarian Parliament approved new emergency powers that will allow Viktor Orbán’s ruling Fidesz party the right to rule by decree, without a set time limit. The entire opposition voted against the bill, but to no avail.

The new plans include jail sentences of up to five years for those accused of spreading misinformation, and up to eight years for those found to be breaching the quarantine measures introduced to stem the coronavirus outbreak in Hungary.

Eighty-seven years ago in Germany, on 23 March 1933, all the parliamentary groups said yes to the Ermächtigungsgesetz, Hitler’s Enabling Act, with the exception of the Communists, who were already banned from parliament, and the Social Democrats, who were being persecuted by the infamous SA.

For a period of four years, the law gave the government the right to enact laws without the participation and approval of the Reichstag.

Now, it may be up to historians, at a later date, to draw parallels between what is happening in Hungary right now and what happened in Germany 87 years ago.

But it is up to journalists to challenge the European Union and especially the EPP, where the German conservatives of the CDU/CSU are the largest party, and ask why they have been putting up with a political leader who, in ten years in power, has been responsible for multiple attacks on the rule of law in the field of justice, civil society and freedom of the press.

And that’s not counting the long list of humiliations he has inflicted on the EU. In 2017, Orbán organised a poster campaign entitled “Let’s stop Brussels!” and erected a border fence that was heavily criticised by the European Commission – only to then demand money from the same Commission for the “protection of the EU’s external border”.

The EU has the institutional and legislative tools as well as the financial lever to act. Why is it not using them? Where are the reactions of the EPP leaders, first and foremost from its chairman and CSU member Manfred Weber?

European citizens expect European leaders to speak out and strongly defend their values.

European Commission President Ursula von der Leyen issued a statement today saying the Commission will “closely monitor, in a spirit of cooperation, the application of emergency measures in all member states,” while stressing it’s of utmost importance that emergency measures are not at the expense of our fundamental principles and values.

She did not mention Hungary or its leader. Is that the best European citizens can get?

On 23 March 1933, only the chairman of the social-democratic party (SPD), Otto Wels, made a courageous statement against the Enabling Act. In his speech, he justified his faction’s position with the commitment to democracy, humanity and justice.

“If the gentlemen of the National Socialist Party wanted to perform socialist acts, they would not need an Enabling Law. They would be assured of an overwhelming majority in this house. Every motion submitted by them in the interest of workers, farmers, white-collar employees, civil servants, or the middle class could expect to be approved, if not unanimously, then certainly with an enormous majority,” he said.

And then he uttered this phrase: “Freedom and life can be taken from us, but not our honour.”

The European institutions and political parties, particularly the EPP, have it in their hands to preserve the honour of our European Union. Our honour.

The Hungarian Parliament approved new emergency powers that will allow the ruling Fidesz party the right to rule by decree, without a set time limit, in a move that prompted an outcry from human rights groups.

The EU will launch its new naval mission to enforce a UN arms embargo on Libya by the end of the month, but it still needs to be determined which member states will contribute to the operation.

A top official of the telecommunications giant Huawei has said that Beijing may consider counter-measures should the United States choose to impose further restrictions on exports of American equipment to be used by the Chinese firm.

The coordinators of political groups on the European Parliament’s agriculture committee agreed to hold a plenary vote on the post-2020 Common Agricultural Policy (CAP) “after the summer break”, according to a document seen by EURACTIV.

Clinical trials investigating the efficacy of using the rheumatoid arthritis drug, Kevzara, in patients hospitalised with severe COVID-19 have now been expanded to include the EU.

For weeks, China has hardly reported any new cases of coronavirus infections. The economy is showing signs of recovery, but the fear of a “second wave” remains.

With “all options on the table”, European Commission president Ursula Von Der Leyen is looking at a consensual response among member states to the economic fallout from the COVID-19 crisis, her spokesman said, shifting away from controversial debt mutualisation advocated by Italy.

This week’s Transport Brief features space, coronavirus weather, penguin-spotting and the fourth edition of the Transport Vlog. Check it out here!

April fools, don’t let them get you tomorrow.