The Brief, powered by BP – 58 pairs of red shoes 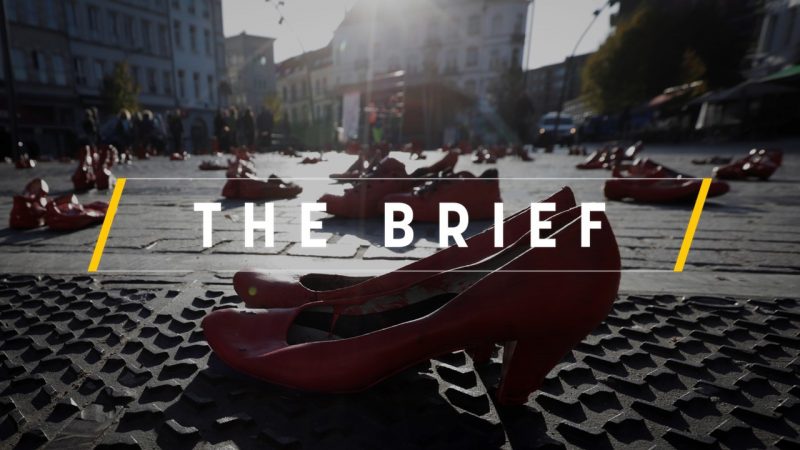 More than a woman a day is killed as a victim of gender-based violence in the EU. Ratifying AND enforcing the Istanbul convention is the least member states could do to tackle these horrific crimes.

Fifty-eight pairs of red shoes covered the Jourdan Square, at the heart of the European quarter in Brussels on Monday (25 November). One pair for each women victim of gender-based violence in Belgium in the past two years.

It made it difficult to walk through, impossible not to see.

Without figures, problems are often invisible and therefore harder to address. Information regarding gender-based violence is only collected in 16 out of 28 member states and the problem is often under-reported.

According to the most recent data gathered by the European Institute on Gender Equality, 788 women were killed by their partner, ex-partner or a family member in the EU in 2016. But only in Spain, 148 women have been killed since then.

In the remaining 12 countries, there is no comparable data, making it almost impossible to quantify the real magnitude of the phenomenon in Europe.

And this only regards domestic violence. Victims of gender-based violence who did not have a relationship with their aggressor are often hidden even deeper in the statistics.

If this was not enough, there is more. According to the Commission, only about one-third of victims report their aggressors to the authorities, making the number of victims quite possibly much higher.

In her political programme, Commission President-elect Ursula Von der Leyen vowed to ensure the full ratification of the so-called Istanbul Convention of the Council of Europe on preventing and combating violence against women.

The European Parliament has advocated since 2014 for the EU accession to the Convention, arguing it would establish a coherent legal framework for working towards the eradication of violence against women across the bloc.

However, resistance in some member states remains an important hurdle. In the past few years, the rise of the far-right has further hindered the process as it has led to an important backlash against gender-equality policies.

In many countries, violence against women is either denied or considered a private issue when happening within the family structure. Terms that would sound from another century, like “passion crimes”, are still being used.

The concept of ‘femicide’, which specifically addresses violent acts against women as the ultimate form of discrimination in a sexist society, has not been legally defined in any member state and is barely used in the public space.

Women across Europe have taken to the streets in the past few days to honour those who have been killed, to support those who still suffer under an oppressive partner and cannot find a way out, and to ask for measures so that no one has to be in that position anymore.

The EU should not only ensure the ratification of the Istanbul convention but make sure it is properly enforced in each and every single member state and that, as promised, equality will be a mainstream objective in all policy objectives.

Working towards the harmonisation of the measures regarding preventing and combating violence against women and protecting the victims should indeed be at the top of the agenda.

Because as long as a single one of us is not safe, none of us are.

A message from BP: Are you among the 34% of people who think Flying taxis will be commonplace by 2050? Explore what people surveyed think the future of transport might look like in a new report from transport research consultancy SYSTRA, commissioned by BP.

EU member states gave its blessing to the new European Commission to start functioning without the UK representative, despite the legal challenges the new executive could face for being unlawfully forged.

As incoming European Commission President Ursula Von Der Leyen prepares to take office in one week, the mission letters she sent to her team of 27 commissioners lack an essential element: revitalisation of the single market.

Germany and France must bury their differences and pursue a constructive partnership with concrete ideas, an ally of German Chancellor Angela Merkel said after a public spat between the two European Union heavyweights over NATO.

Instead of funding ‘business as usual’-research, the need to take a long-term perspective is crucial for innovative solutions, but that is often difficult to accept for policymakers, the head of a top European research agency told EURACTIV.com in an interview.

This year’s COP25, which takes place in Madrid in December, will be the start of a crucial year for the environment.

The EU’s outgoing Fisheries Commissioner warned that climate change and biodiversity loss were putting the earth’s ecosystems dangerously close to a tipping point.

European Parliament plenary in Strasbourg continues with debates on COP25/UN Climate Change Conference and the EU Accession to the Istanbul Convention and other measures to combat gender-based violence.