The Brief, powered by TIF – A new dialogue with Catalonia 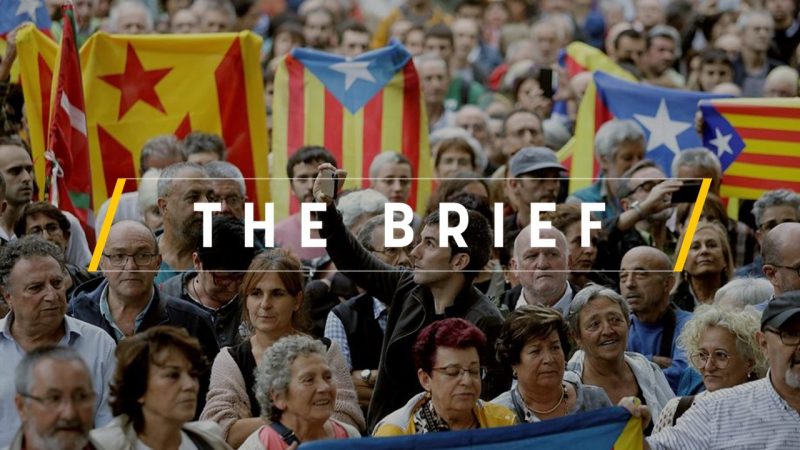 After years of dealing with the Catalan issue by judiciary means, the verdict in the trial of the regional separatist leaders should bring a new opportunity for political dialogue. But staunch positions and the social fracture require time and courage, scarce commodities in Spanish politics today.

Judges looked into the illegal referendum that took place in October 2017 and the declaration of independence by the then Catalan government. In the regional elections held in December 2017, the pro-independence camp obtained less votes than parties against it: 2,06 millions versus 2,2 millions.

On Monday (14 October), the seven judges of the Supreme Court concluded by unanimity that the ultimate goal of the nine Catalan pro-independence leaders was to “persuade” the Spanish government to agree on a legal referendum, instead of breaking the country’s territorial integrity by the use of violence.

As a result, they were sentenced to between 9 and 13 years in prison, for sedition and misuse of public funds, instead of rebellion, which would have carried a 25 year tariff, as the public prosecutor had requested.

Spain’s judiciary system is not perfect. A total of 55% of Spaniards said the independence of our judges is “bad or very bad”, the fourth-worst result in the EU. The governing board of the judges should be depoliticised. And the country is also progressing slowly in implementing some of the reforms recommended by the Council of Europe.

The country could hardly be considered as a ‘full democracy’, as The Economist calls it, without a trustworthy judiciary system.

When it comes to the Catalan crisis, arguably the most serious institutional crisis Spain faced in its four decades of democracy, the Supreme Court said the other two branches of power should take the lead.

“We are not responsible for offering political solutions to a problem of historical roots,” their sentence said.

Restoring dialogue between Madrid and Barcelona will be next to impossible in the next few weeks. Emotions are running high and the general elections on 10 November will further antagonise both camps.

On the positive side, Socialists, centre-right (Popular Party) and liberals (Ciudadanos) are maintaining a fragile unity, which must be upheld once the new government and the ‘Govern’ of Catalonia sit down and talk, as they should.

If Catalans want to make their voice heard, the rest of Spain wants to decide on the territorial boundaries of their country and its sovereignty, each side argues.

Plus, Brexit has painfully exposed the dangers of reducing extremely complex issues to a simple question.

But at the same time, Madrid should be open to address longstanding Catalan demands, including the fiscal situation of the region, one of the main irritants in recent years.

It is almost impossible to summarise in 500 words the near 500 page court ruling, the protests, statements, the consequences of the pro-independence bid and years of estrangement between Madrid and Barcelona.

One thing is clear: the political process will be neither simple nor painless.

But if Spain managed to become an example of a peaceful democratic transition and defeated terrorism, it should not be too late to restore the relationship between two communities with centuries of common bonds.

Message from Technology Industries of Finland:
Skilled labour and mobility are key factors for successful and vigorous growth in the EU. Check out the Future of European Jobs here.

While EU and UK negotiators are still deadlocked over a Brexit deal, and the UK just weeks from leaving the bloc, it is easy to ignore the human cost of Brexit, deal or no deal.

The Bulgarian village of Radyuvene is a far cry from the hustle and bustle of UK urban life. EURACTIV visited some British expats that came to stay.

Volkswagen has postponed the decision on opening a new car factory in Turkey, against the background of the recent Turkish military offensive in Syria.

Three people died in Germany because bacteria-contaminated food from a meat producer was sold on the European market. Although the authorities knew about the bacterial discovery, production was only halted after two weeks.

The dominance of US firms and Chinese companies in the digital world has sounded the alarm bells in Europe. The EU seeks a comprehensive strategy to lift its competitiveness.

EU ministers have clinched a midnight deal in Luxembourg on the fishing quota limit in the Baltic Sea for 2020, following the Commission’s proposal to decrease the total allowable catches (TACs) for eight out of ten most commercially important fish stocks in the basin.

The EU should allow North Macedonia and Albania to sit at the EU accession negotiations table this week – anything else would be a grave political mistake, argues PES president Sergei Stanishev.

Armenia has a “completely different level of relationship” with the EU after last year’s revolutionary uprising, the country’s deputy PM Avinyan has said, telling EURACTIV any future EU accession is a “question that the people of Armenia need to answer.”

Russia-backed Syrian forces took rapid advantage of an abrupt US retreat from Syria filling the vacuum left by Washington.

Denmark will fast-track legislation allowing people with dual citizenship who have gone abroad to fight for militant groups like Islamic State to be stripped of their Danish nationality.

The Tripartite Social Summit in Brussels tomorrow on a just transition to a climate neutral economy, skills and improving access to adult training and industrial policy.

3 responses to “The Brief, powered by TIF – A new dialogue with Catalonia”