Poland was until recently illustrative of a successful rise from the communist regime’s rags to a booming democracy and one of the European Union’s “big six” in terms of power and influence.

Now some of the people who once fought hand-in-hand with Lech Wałęsa and the Solidarność movement for freedom and democracy fear that the fruit of the last 28 years has gone rotten.

According to Jarosław Kaczyński, the leader of the ruling conservative Law and Justice (PiS) party, the 1989 democratic revolution was not successful.

The reason, in his view, is that not all the communist regime agents were removed from power and influence.

This became a working argument applied to justify the government’s undertakings against the independent judiciary, starting with the Christmas 2015 putsch against the constitutional tribunal, which unleashed a fury of European criticism and prompted the European Commission to trigger the rule of law mechanism.

“In Poland, the judiciary hasn’t been reformed after the time of Polish People’s Republic” (the former communist state that fell down in 1989), so “a radical change is needed”, Kaczyński insists.

Last week the Polish parliament passed two laws that politicise the judiciary and further subordinate it to the executive – namely to justice minister Zbigniew Ziobro, who has already been made prosecutor general and is also a member of parliament.

First, the law on the system of common courts will allow Ziobro to exchange all court presidents without specifying a reason. The new presidents will be given regulatory tools to put pressure on judges.

Second, the law on the National Council of the Judiciary (KRS), a “constitutional organ safeguarding independence of courts and judges” that evaluates and decides upon all judge nominations and promotions.

If the bill is passed the tenure of all 15 judges will terminate despite it constitutionally lasting four years. Their successors will be chosen by the parliament (not by a self-governing judges council), where the PiS has a direct majority.

Both bills only appeared on the lower house of parliament’s Wednesday (12 July) agenda that same morning, so as not to incite protests.

Currently, only a presidential signature separates the two bills from coming into force. It is not by chance that the country’s president, Andrzej Duda, has been so far scornfully called “a pen”, having signed all the laws reaching his office.

Last Thursday (13 July), he used his veto for the first time (regarding the law on Regional Chambers of Audit that would allow central power to subordinate regional authorities). It was a precedent giving some hope that the first veto would not be the last.

On 12 July, just after 11 pm, another bill appeared on the parliamentary website, designed to put the final touches on the judiciary’s political subordination.

The project on the Supreme Court envisages terminating tenures of all justices of this court (article 87), unless Ziobro decides otherwise on an individual basis.

The justice minister will also decide who will be the new Supreme Court head (article 88). Current First President Małgorzata Gersdorf, who openly criticises the government, is certain to lose her role.

“This is indeed a very dangerous moment for our country’s democracy and rule of law, since the separation of powers is key, which start to be lacking,” she warned.

This week the lower house can quickly proceed with the Supreme Court bill, and then the Senate during its last pre-holiday session, which is great timing in terms of avoiding massive publicity. And then it will be left to a swish of the president’s pen.

PiS is constructing a fortress for itself. According to its binary political outlook, “who doesn’t stand with us, stands against us”.

After the Constitutional Court was paralysed, the public media has been transformed into a mere propaganda tool, while the rights of special services have been beefed up.

The independent judiciary was one of the last guarantors of Polish democracy, rule of law and individual freedom.

There are also more trivial reasons to the hasty changes. On 9 August, the Supreme Court will examine the case for a presidential pardon for Mariusz Kamiński, a leading PiS politician and former chief of the Central Anticorruption Bureau (CBA), sentenced to three years for abuse of power.

On 31 May, the Supreme Court ruled the pardon invalid and August will see an upturn in Kamiński’s fortunes, as well as his former deputy Maciej Wąsik and two other CBA officials.

And on 12 September, the Supreme Court will examine another case of pride for PiS – the legality of the election of Constitutional Court President Julia Przyłębska.

She was appointed based on a controversial political ruling amid the Constitutional Court controversy. As a result, courts started questioning the Court’s decisions, so she needs legitimacy.

Thus the circle of subjugating the judiciary will close.

Thousands of Poles took to the streets of the nation’s cities on Sunday to protest violating the Constitutional separation and balance of powers (article 10).

A major protest that took place yesterday in front of the Polish parliament in Warsaw was organised by the Committee for the Defence of Democracy (KOD), a civic movement that has backed most of the big demos in Poland since December 2015, after the PiS began meddling with the Constitutional Court.

“We came to protest at the Sejm (lower house) as we don’t agree to breaching of the constitutional order, rule of law, constitutional democracy,” Jarosław Marciniak from KOD told EURACTIV.

The crowds showed that “there are many people in Poland that cherish division of powers, rule of law and democratic standards. The question is, whether those protests will be strong enough to stop all three laws from entering into force,” Polish Ombudsman Adam Bodnar said.

Despite their communist era struggle, they chose a different path to Kaczyński after democratisation and now they are treated as major public enemies. Critical voices have now risen on the side of the protesters, asking why only the old heroes are heard and where the new blood is.

At 9pm, the association of Polish judges, Iustitia, which is the largest association of judges in Poland, organised another non-partisan protest against all three legislative projects.

The candle-lit crowd stood peacefully listening to Chopin’s piano compositions and sang the Polish anthem at the end. 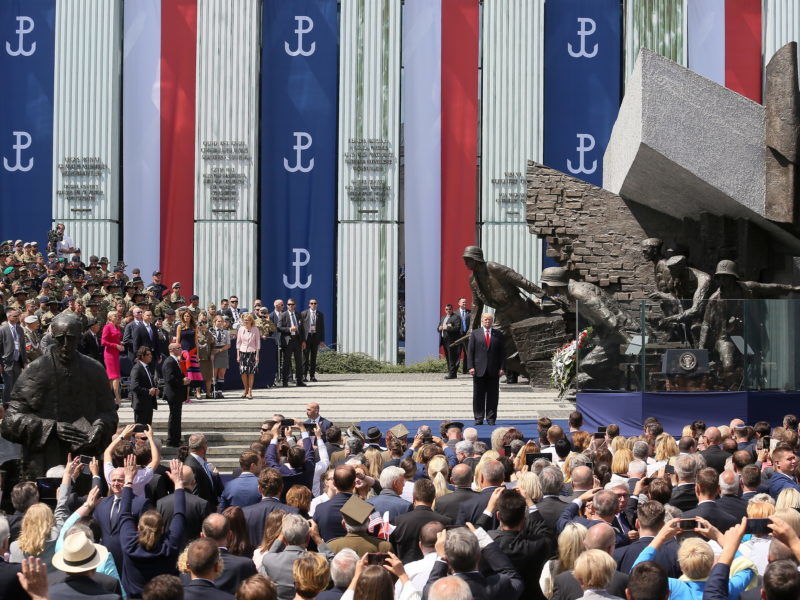 President Donald Trump affirmed the US commitment to the defence of NATO allies yesterday (6 July) in a Warsaw speech that gently criticised Russia, and he said Western civilization must stand up to “those who would subvert and destroy it”.

3 responses to “Thousands protest ‘coup against constitution’ in Poland”