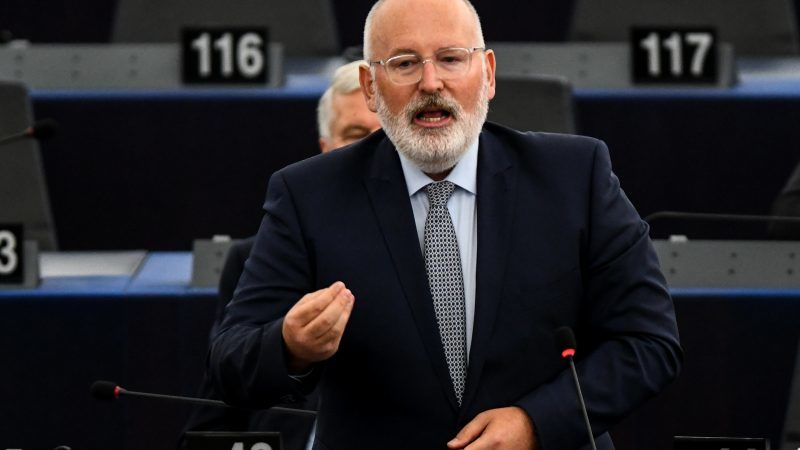 First Vice-President of European Commission Frans Timmermans of the Netherlands, delivers his speech in the European Parliament in Strasbourg, France, 13 June 2018. [EPA-EFE/PATRICK SEEGER]

Poland has repeatedly clashed with Brussels in recent months over its judiciary reform, which the Commission says could pose a threat to the rule of law in the country. In December, Brussels triggered an infringement procedure that could lead to Warsaw losing its voting rights in the European Council if the country pursues reforms deemed to pose a “systemic threat” to the rule of law.

“During the last six months, the Polish authorities have introduced a number of changes that have caused a lot of damage, after the Constitutional Tribunal and the National Council for the Judiciary, it is now the Polish Supreme Court which is at risk of coming under political control,” Timmermans warned in Strasbourg.

He emphasised that the Commission welcomes the four amendments to the overhaul proposed by Poland. They include the introduction of a uniform retirement age of 65 for male and female judges and the reduction of the role of Justice Minister Zbigniew Ziobro in the process of removing high court officials. The Polish government has shown “willingness” to bring changes in other areas, Timmermans acknowledged.

However, according to him, the changes “are not by themselves sufficient” and have not yet dispelled the concerns.

“I regret to inform you that overall and in spite of all of these legislative changes, key concerns which the Commission identified in the recent proposal, remain unaddressed.”

The main concern includes the “risk of irreparable damage” to Poland’s Supreme Court, where around 40% of judges could be forced into early retirement on July 3 under the proposed reform.

Timmermans said the Polish authorities must take quick action to resolve the situation before 3 July, when the decision on the expiration of the judges’ term of office takes effect.

However, one of his remarks caused some stir in the chamber. “I will fly to Moscow on Monday,” said Timmermans during the debate, confusing Warsaw with the Russian capital. The European Conservatives and Reformists quickly responded to the incident: “Mr Timmermans, it’s 2018. You do not have to fly to Moscow to talk to the Polish government,” the conservatives wrote on Twitter.

Mr. @TimmermansEU, it's 2018. You don't have to travel to Moscow anymore to speak to the Polish government. #RuleOfLaw #Poland pic.twitter.com/YJL1M3Jl6J

“Poland has done a lot to reach an agreement and to take into account the Commission’s reservations. Unfortunately, good will and willingness to understand both sides is needed for an agreement. It is regrettable that the Commission does not want to show this good will and understanding,” said Zdzisław Krasnodębski, vice-president of the European Parliament and ECR MEP.

“We, for our part, have done everything possible to end this harmful dispute for the European Union. Now the Poles, in their vast majority, believe that the time of our concessions is over. With all the peace and firmness we are waiting for the movement of the Commission and the Council of Europe, ready to continue to inform and explain our position,” he added.

Although Polish deputy Foreign Minister Konrad Szymański happens to be in Strasbourg to discuss rule of law matters, a meeting between Timmermans and Szymański did not take place.

“Dialogue continues, and contact continues. We have presented a very specific offer. Very specific things were done in the Polish parliament. Now the ball is in the court of the European Commission,” Szymański told journalists in Strasbourg, according to Polish media.

Brussels, in the meantime, seems split over the issue. While Timmermans presses hard for concessions from Warsaw, Commission boss Jean-Claude Juncker in the past weeks hinted that he would like to close the case on Poland sooner rather than later, most likely eyeing the fast approaching  European Elections in 2019.

Already next Monday (18 June), Timmermans is scheduled to travel to Warsaw for talks with Polish PM Mateusz Morawiecki, who took over last December and managed to somewhat improve relations with Brussels. The next key date is 26 June, when EU ministers will meet in Brussels for the General Affairs Council.