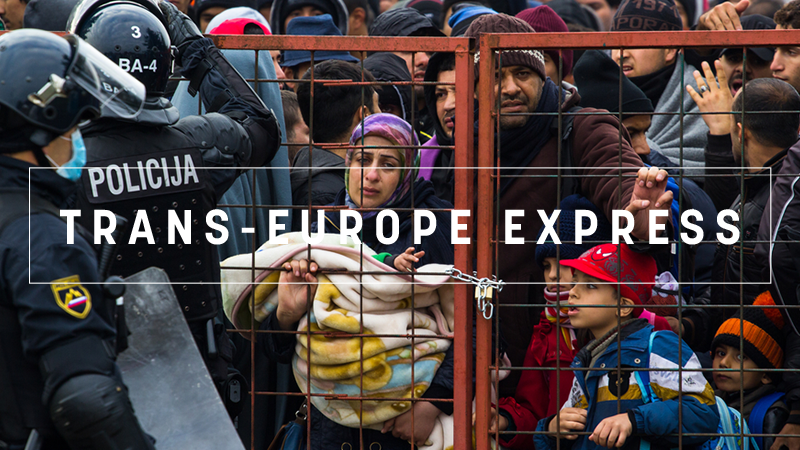 Trans-Europe Express is EURACTIV's weekly roundup from across the continent.

Never before since becoming Germany’s Chancellor in 2005 has Angela Merkel been as close to losing power than on Thursday (14 June). And the reason was migration.

The CSU, in quiet political times normally described as the CDU’s sister party from Bavaria, did not hesitate to put the current coalition in jeopardy in order to force the Chancellor to put aside her liberal stance and adopt a tough line on migration. All because the CSU says it will not wait any longer for Europe to act.

So what exactly happened in Berlin? On Wednesday night and the early hours of Thursday, the Chancellor and her interior minister, CSU chairman Horst Seehofer, tried to find common ground on a new asylum and refugee bill, after weeks of polemics over Germany’s migration policy. But they failed.

This was then followed by the interruption of the parliamentary session, with the CDU and the CSU each holding separate meetings. According to veteran political reporters, this has not been seen since the 1990s.

It turned out that a large majority of CDU MPs officially back Merkel’s immigration policy. And the entire CSU is behind Seehofer’s ‘Migration Master Plan’, which foresees sending migrants back from the German border if they have already applied for asylum in another European country.

This is a complete opposite of what Merkel wants to put on the table: finding a compromise with the other member states with a view to reaching an agreement at the crucial EU Council on 28-29 June. Because she believes turning migrants back would hurt the already over-burdened frontline Mediterranean countries such as Italy and Greece.

In other words, Merkel is still looking for a solution with all the European partners while Seehofer is betting on an ‘Axis of the willing’ that unites Austria, Italy and Germany.

Adding fuel to the fire, Seehofer said he is ready to implement his plan no matter what via the ministerial decision pathway – meaning overruling the Chancellor’s executive power – to turn refugees away. He might make an announcement on that matter on Monday.

Rejecting the refugees would further aggravate the European status quo on migration and actually violate existing European legislation. What’s worse, Merkel cannot afford to have her own interior minister undermining her power.

One thing is sure though, migration is back at the very top of the European political agenda – and it is here to stay: migrants and refugees continue to knock on Europe’s doors. In the Balkans, their numbers are creeping up.

A migration expert familiar with the situation in the Balkans told EURACTIV that although the de-facto closure of the so-called ‘Western Balkans’ route in 2016 effectively reduced the number of refugees and migrants arriving in the Western Balkans, many still continue to arrive, relying primarily on smugglers.

“Furthermore, the developments since November 2017 point to an evident and steady trend of increase of new arrivals in the Western Balkans region, this time mostly in the countries that had not been affected by the refugee crisis in 2015/16 – Albania, Montenegro, and Bosnia,” the expert said and provided corroborating figures:

The numbers of new arrivals are still relatively low compared to the situation in 2015/16 but the increase in the last few months has been exponential. The figures of newly arriving asylum-seekers to the region, mostly from the Middle East, Pakistan and North Africa, in the first 5 months of 2018 already exceed by far the total numbers for the entire 2017.

And he warned that this significant increase in arrivals and asylum applications has undoubtedly created a new phenomenon for the fragile asylum systems in the region and presents a serious challenge “that still can and should be manageable”.

On the political level, it’s evidently a most serious challenge for Merkel, who appears increasingly isolated in the new political climate that will certainly pervade the European elections in 2019.

Last-ditch talks. British PM Theresa May avoided a humiliating defeat in the House of Commons after offering rebels a concession on a ‘no deal’ Brexit.

Diverging statistics. France is the third European country in terms of asylum applications received but is only 26th out of 28 when it comes to acceptance rate.

Taking initiative. While armed conflicts are on the rise around the world, France launched a new strategy for prevention, resilience and sustainable peace in developing countries.

CETA again. Italy threatens that it will not ratify the trade agreement with Canada, as it does not sufficiently protect the country’s food specialities.

Need for speed. Poland wants to speed up progress on gas directive, aimed against the construction of the Nord Stream 2 gas pipeline.

Diplomatic approach. Austrian Chancellor Sebastian Kurz, in a government coalition with right-wing FPÖ, emphasised the security needs of the Israelis during a recent visit to Jerusalem.

Road to euro? Bulgaria announced this week it will launch a joint application to the euro waiting room and the banking union.

What’s in a name? Macedonia and Greece finally resolved their nearly three-decade row by agreeing to the name Republic of North Macedonia.

Complex relationship. Research shows that Greeks seem to have an unclear picture of the European Union’s cohesion policy.

Investigation opened. Decades after the NATO bombing of Serbia, local authorities have launched research to determine whether depleted uranium bombs were used, which could explain the surge in autoimmune diseases.

Seal of approval. Poland’s ruling party has a peculiar stance when it comes to nature conservation as recent killings of protected seals along the country’s shore have been completely ignored by the party.