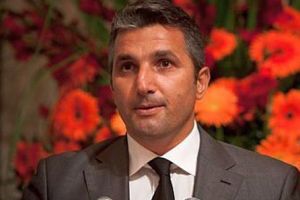 Prominent Turkish journalists on trial for alleged links to an underground anti-government network called the conspiracy charges against them "political" in a case that has raised concerns over media freedom in Turkey.

Nedim ?ener and Ahmet ??k, investigative journalists arrested in March and held since then in a top-security prison outside Istanbul, were among 14 defendants in court to open their defence on Thursday (5 January).

Turkey is currently holding nearly 100 members of the news media in jail, one of the highest numbers worldwide, in a crackdown that critics and human rights groups say blights the country's image as a role model for democracy in the Middle East.

Looking thinner but defiant, ?ener, an award-winning journalist who has written books about Turkey's clandestine activities, greeted observers as he entered a packed courtroom saying "Welcome to the theatre" and took a bow.

??k, who has written books about the infiltration of the police by an Islamist movement led by Fethullah Gülen, a Muslim theologian based in the United States and considered close to parts of the ruling Justice and Development Party (AK), derided the case against them.

"Our arrests were political," ??k said during a break.

Like ?ener, he is accused of belonging to the 'Ergenekon', an ultra-nationalist group accused by prosecutors of being behind multiple conspiracies against Prime Minister Recep Tayyip Erdo?an's AK Party government.

If found guilty the two face a maximum of 15 years in prison. Both have denied the charges and say the evidence against them was planted.

Investigations into Ergenekon have spiralled since they first opened in 2007, and critics accuse the government of scaremongering to silence opponents. The government denies any such motives.

Several hundred suspects, including retired senior military officers, academics, lawyers and journalists, have been detained in cases related to Ergenekon.

The other defendants in court included Yalç?n Kucuk, an author and television debate show presenter, and Soner Yalç?n, editor of Oda TV, and several colleagues from the television website known for its criticism of the government.

Also in the dock was a former police chief, Hanefi Avc?, who has written about the infiltration of the police by Gülenists.

Government officials says the journalists are on trial for criminal activities, not because of what they wrote.

The European Union and the United States have raised their concerns over the arrests of journalists in Turkey (see Background).

But with the economy growing rapidly and Turks tasting unprecedented prosperity and political stability, public outcry has been so far relatively muted.

Turkey is a European Union candidate that is widely seen as a model of Islamic democracy in a region undergoing deep changes due to the 'Arab Spring' popular uprisings.

But Western officials, including EU Commissioner for Enlargement Štefan Füle and US Secretary of State Hillary Clinton, have been highly critical of the Turkish government's treatment of the media and in particular the imprisonment of journalists.

Critics says the crackdown on journalists is a reflection of Erdo?an's intolerance and accuse the ruling AK, in power since 2002 and with a huge majority in parliament, of trying to silence the news media.