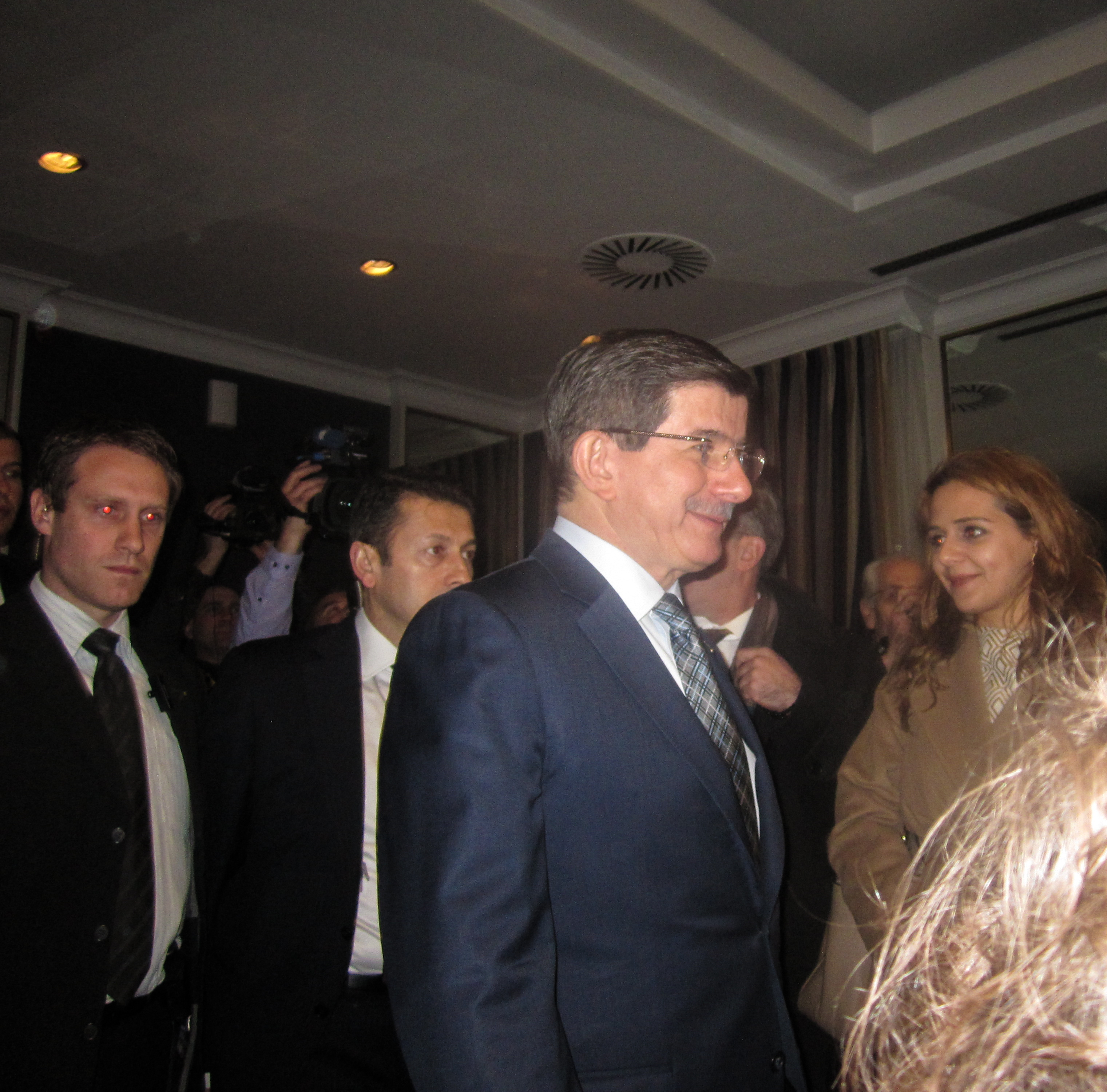 As a consequence of the Eurozone crisis, racism is on the rise, in the same way that the 1929 crisis inspired anti-Semitism. But this time the scapegoats are Muslims, Turkish Prime Minister Ahmet Davuto?lu told a Brussels audience on Thursday (15 January).

Davuto?lu, who came to Brussels to meet with Council President Donald Tusk and Commission President Jean-Claude Juncker, first addressed a conference organised by Friends of Europe, a Brussels think tank.

The former Turkish foreign minister, who took over as Prime Minister when Recep Tayyip Erdo?an was elected President last August, spoke of geopolitics, and didn’t miss any opportunity to criticise the EU for keeping its distance from Turkey, and for not listening to Ankara’s advice.

One important message was that the EU, and the West in general, had missed the opportunity provided by the Arab revolutions. The West didn’t mobilise, as it did for Eastern Europe, after the end of the Cold War, Davuto?lu argued.

More concretely, he blamed the West for not having supported the “moderate young generation” in Syria, the result being that terrorists filled the vacuum.

He also criticised EU ministers’ handling of the situation in Egypt and the Middle East.

“After the coup d’état in Egypt, I had discussions with EU ministers. I was telling them, please, help democracy and don’t accept a military coup d’état against an elected President. They were explaining to me that Egypt was a special case and it needed time for democracy. […] Time means ten years, twenty years, one century? Nobody knows,” he said.

“If we had financed young democracies in the Middle East, it would have been less expensive than fighting terror today […] Unfortunately, the EU in particular became an observer how these states will fail. And now we have meetings (on) not how to support democracies, but how to defend ourselves against terrorist attacks which came out because of this crisis”, Davuto?lu said.

He also related his visit to Germany in 2012, when Davuto?lu said he visited all the relatives of the victims of the racist murders by a neo-Nazi gang called the National Socialist Underground (NSU), which took place between 2000 and 2007. Eight Turks, a Greek, and a German policewoman were killed in towns across Germany in that period.

He criticised the way the German police had handled the case and, explaining that they tried to accuse the relatives of the Turkish victims, instead of trying to unveil the Neo-Nazi plot.

“This is the challenge, like in Paris,” he said, referring to the terrorist attacks in the French capital from last week.

“Whenever there is terrorism, whoever and for whichever reason, we will be there, I will be there,” he said, adding that he wanted to see the same solidarity when a mosque is burnt in the centre of Berlin, and in other places.

In the last two years, 94 mosques have been attacked in Germany, Davuto?lu said.

The Turkish Prime Minister also said that when he was in Paris last Sunday, at the Republican march against terrorism, a leader asked him “How we Europeans should act to approach Turks.”

“Nobody can tell me ‘we Europeans’ and ‘you Turks’ […] But we are part of European history. And we are part of contemporary Europe. There are 45 million Muslims living in Europe and more than 6 million Turks. […] We have to have an inclusive European identity. But if you have a Holy Roman- German- Christian type of understanding, then Europe has ended, sorry,” Davuto?lu said.

Focusing on Germany, he said that in the same way as after the 1929 crisis, the Nazis scapegoated Jews, now, for Pegida, the German anti-immigration movement, the scapegoats are Muslims.

Davuto?lu argued that Europeans, including Turkey, should unite with a vision about the future of the continent.

“If we don’t provide the same level of economic wealth for this diversified European identity, then there will be confrontation,” he said, before pleading in favour of Turkey’s buoyant economy that would help the EU exit from recession.

“There cannot be sustainable development without political stability,” Davuto?lu said.

The Turkish Prime Minister made ironic remarks about the lack of political stability in EU countries, saying that at a NATO meeting in his previous capacity as foreign minister, he was the only to have been in office for four full years. Another country which he didn’t name had changed seven ministers in the meantime, and some others six or five. He also quipped about some governments in Europe being governed by coalitions consisting of both the centre-left and the centre-right.

“What will happen if Syriza comes to power in the next election [in Greece]? Or in some countries, ultra-nationalist groups can block parliament? Even in the European Parliament, these trends are increasing,” he said.

‘Turkey’s border is border of Europe’

Davuto?lu spoke at length about the considerable effort of his country to host refugees from Syria and Iraq. He said that the country now had more than 2 million refugees from these countries. Turkey has spent $5 billion only for the refugee camps, he said.

“I’m proud of the attitude and culture of my nation [in hosting the refugees]. If it was in Europe, I would be asking how many anti-Syrian, anti-foreigner, anti-this or that, would have happened, if two million people would have come to any European country,” he asked.

Regarding the stalled Turkish accession talks, Davuto?lu said that his country could open and very soon close most of the chapters. He made no mention of the reasons for which a number of EU countries have blocked the talks, and never once mentioned Cyprus.

Asked about the Russian plans to build an offshore pipeline to Turkey in order to bypass Ukraine for supplies further West, he said that his country welcomed any new gas pipelines, but that Ankara didn’t see such a move as an alternative, and that he hoped that Ukraine would remain a transit country for Russian gas.

Davuto?lu quipped that he saw it “strange” that the EU didn’t open the energy chapter with Turkey.

While Davuto?lu was visiting Brussels, in Strasbourg the European Parliament passed a resolution condemning the police raids and arrests of journalists in Turkey last December.

MEPs call on the Turkish government to address media freedom as a priority, recalling that "a free and pluralistic press is an essential component of any democracy" and pointing to the need to make progress with reforms in order to gain pre-accession funding.

Parliament demands "ample and transparent information on the allegations against the defendants", insists that the defendants are given access to the incriminating evidence and full defence rights and say the cases must be handled properly in order to "establish the veracity of the accusations without delay and beyond reasonable doubt.

The resolution expresses concerns about "backsliding in democratic reforms, and in particular the government’s diminishing tolerance of public protest and critical media" and urges the Turkish government "to address media freedom as a matter of priority and provide an adequate legal framework guaranteeing pluralism in line with international standards".

0 responses to “Turkish PM: If Europe persists in its ‘Holy Roman attitude’, it is over”