Tusk calls for at least 100,000 refugees to be redistributed 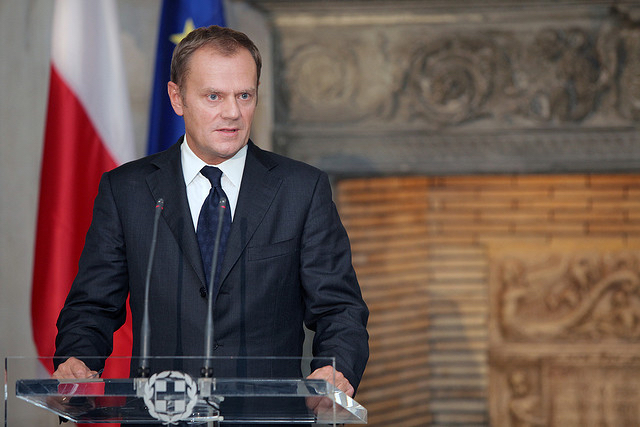 “Fair distribution of at least 100,000 refugees among EU states is what we need to do,” Tusk, who chairs summits of EU leaders, told a joint news conference in Brussels with Hungarian Prime Minister Viktor Orban.

EU countries have so far committed to share about 32,000 asylum seekers from Italy and Greece, a number short of a European Commission proposal of 40,000. A new proposal from the EU executive is expected next week.

Tusk called for refugees’ reception centres to be built close to war zones and “outside Europe, where refugee camps already exist” and also said EU leaders should be ready at a summit next month to commit much more money to the migration crisis.

Asked about Tusk’s comments today, the European Commission said it did not want to comment on “gossip”, ahead of next week’s planned unveiling of the new proposal.

But a leaked draft of the proposal appeared to confirmed that 160,000 asylum seekers from Hungary, Italy and Greece would be relocated. That is an additional 120,000 people on top of the original 40,000 proposed by the executive in May. The 40,000 figure is re-tabled, superseding the voluntary agreement in July.

The plan is expected to be formally unveiled by Juncker during his State of the Union speech on 9 September 9 after being approved by Commissioners, a source said.

Juncker’s plan faces tough opposition, as EU leaders failed to agree on his proposal for compulsory quotas for the relocation of 40,000 refugees from Syria and Eritrea.

France and Germany will make joint proposals on how to host refugees and distribute them fairly across Europe, President François Hollande’s office said in a statement on Thursday.

“The European Union must act in a decisive manner and in line with its values,” the statement said after Hollande spoke to German Chancellor Angela Merkel by telephone.

“These men and women, with their families, are fleeing war and persecution. They need international protection.”

The statement added that the two countries wanted to converge standards to strengthen the European asylum system, ensure the return of illegal migrants back to their country of origin and to provide necessary support to nations where migrants come from and transit through.

British Prime Minister David Cameron came under pressure on Thursday to take in more refugees after the image of a dead Syrian toddler washed up on a Turkish beach raised the emotional temperature of the debate.

Cameron said on Wednesday (2 September) that he did not think the answer was to take more and more refugees but to bring peace and stability to the Middle East, a response widely perceived as inadequate in the face of the unfolding tragedy.

“Mr Cameron, summer is over […] Now deal with the biggest crisis facing Europe since WW2,” read a headline on the front page of the Sun, Britain’s highest circulation newspaper, above the image of the lifeless boy being carried away.

The change of tone from a newspaper criticised by the United Nations rights chief in April after one of its columnists compared migrants to “cockroaches”, was a mark of the emotional impact of the images of human suffering across Europe.

Britain has granted asylum to about 5,000 Syrians who were able to reach the country by their own means since the start of the Syrian war. In addition, it has taken 216 people under a UN-backed relocation scheme for vulnerable Syrians. Several European countries have taken in Syrians in greater numbers.