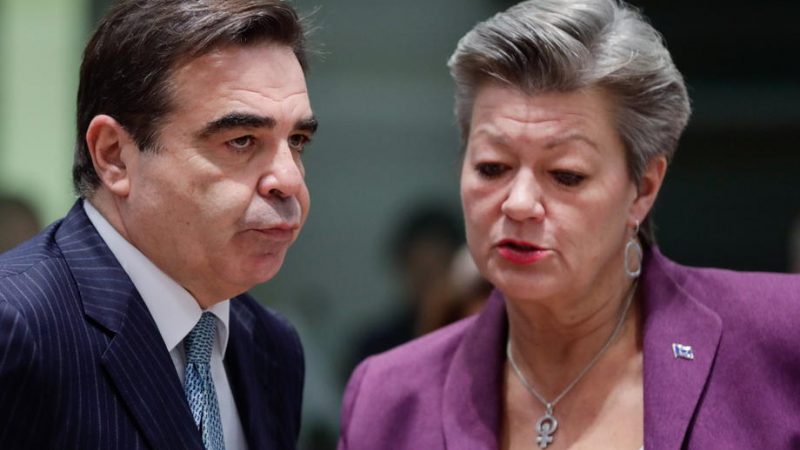 The call came ahead of the EU’s home affairs ministers meeting Luxembourg later on Friday (8 October). They are expected to discuss strengthening the EU’s external border and screening and detaining migrant arrivals.

“Recent developments at the external borders of the European Union (EU) indicate that the EU needs to adapt the existing legal framework to the new realities, enabling us to adequately address attempts of instrumentalisation of illegal migration for political purposes and other hybrid threats,” the twelve EU interior ministers wrote in their joint letter.

Large numbers of illegal migrants began crossing the border from Belarus into Lithuania, Latvia and Poland, actions largely acknowledged as a type of hybrid warfare by Lukashenko’s regime.

“To ensure the integrity and normal functioning of the Schengen area, all our external borders must be protected with maximum level of security,” the joint letter stated.

Although some EU member states adopted resolute measures at the national level, the letter’s signatories stressed that “to counter the instrumentalisation of illegal migration and other hybrid threats (…) we need common solutions at EU level”.

“Physical barriers appear to be an effective border protection measure that serves the interest of the whole EU, not just member states of first arrival,” the twelve EU interior minister wrote.

“This legitimate measure should be additionally and adequately funded from the EU budget as a matter of priority,” they added.

The Schengen Border Code allows EU countries to establish shared border crossing points with their non-EU neighbours. Border guards of each country carry out exit and entry checks one after the other, per their national law.

Lithuania had previously suggested that the EU fund border barriers on its external frontier from its common budget, backed Poland and other Baltic countries.

However, the code currently does not foresee a physical barrier as a measure for protecting the EU external borders, and the EU only provides support for surveillance systems on its borders.

As border surveillance is “important for situational awareness and contributes to ensuring high-level of security in the EU”, letter signatories called for “further development of common standards of the EU border control and in particular of the external border surveillance”.

The joint letter also stated that simultaneously, the EU’s migration and asylum policy “must be abuse-resistant”.

“There are no clear rules as to what actions may member states take in case of a hybrid attack characterised by an artificially created large-scale inflow of irregular migrants, facilitated, organised and/or pushed by a third country for the purposes of exerting political pressure, or in cases of similar challenges,” ministers wrote.

“No third country should be able to make use of our asylum system for the purposes of exerting political pressure and blackmailing the EU and its member states or exploit the present situation in Afghanistan,” signatories added.

The word ‘pushbacks’ is not mentioned explicitly in the letter.

The twelve EU interior ministers called upon the European Commission to present related legislative proposals by the end of this year. These should be complemented by “detailed discussions” about the EU’s deadlocked Migration and Asylum Pact.

However, countries with relatively high asylum applications, like Germany, France, Spain or Italy, were notably absent from the letter’s signatories.

Portugal, which was at the helm of the EU Council in the first half of the year, managed to clinch a last-minute deal on the new European asylum agency at the end of June. Still, the hugely controversial migration pact negotiations have seen little movement since.

Schinas told EURACTIV in an interview that he was “optimistic that immediately after the French elections we will enter into a very rapid process of convergence and final agreement” on Europe’s new migration pact next year.

However, Hungary and Poland are fierce opponents of the Commission’s plan and would instead like to see migration remain a national competence.