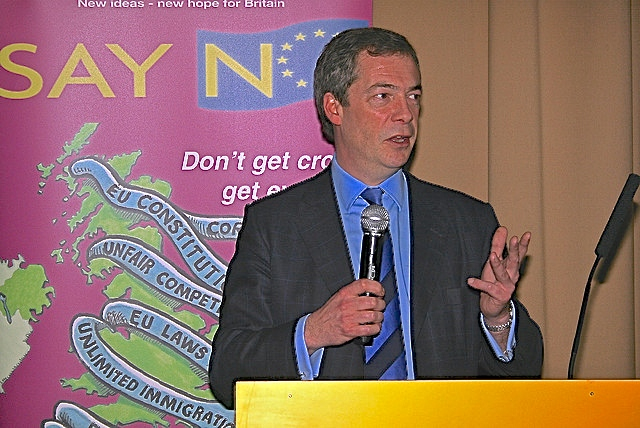 Britain’s UK Independence Party (UKIP) on Monday (19 May) took out an advert in a national newspaper to assert it was not racist as rival politicians and the media united to condemn its characterisation of Romanian immigrants.

Most opinion polls show UKIP is on course to come first or second in elections to the European Parliament on Thursday, pushing Conservative Prime Minister David Cameron’s party into a humiliating third place just a year before a national election.

The party, which wants Britain to leave the European Union and adopt stricter border controls, has ridden a wave of dissatisfaction about what many Britons perceive to be excessive immigration levels to surge in the opinion polls.

Last year, UKIP took almost one in four votes in local elections. Though it siphoned support from all parties, its success has in particular fuelled fears among the Conservatives that it could split the centre-right vote in 2015.

However, comments about Romanian immigrants by Nigel Farage, UKIP’s leader, have drawn unusually fierce protests from across the political spectrum, a backlash that some commentators and rivals think could mark a turning point in the party’s fortunes.

Citing police crime statistics involving Romanians, Farage, an admirer of former prime minister Margaret Thatcher, said in a radio interview last Friday he thought people would be concerned if their neighbours were Romanians.

“I was asked if a group of Romanian men moved in next door, would you be concerned? And if you lived in London, I think you would be,” Farage told the LBC radio station.

EU restrictions on Romanians and Bulgarians working in Britain were lifted in January. UKIP had warned of a big influx, citing the expected increase as an example of how Britain’s EU membership meant it had no control over intra-EU migration.

Tens of thousands from the two poor east European countries did come before the restrictions were lifted, but official statistics last week showed the number of Romanian and Bulgarian workers fell in the first quarter of 2014.

Farage, who said on Sunday he had been tired when he made the Romanian comments and had chosen the wrong form of words to express himself, faced an angry backlash on Monday.

Cameron, who has promised to get net migration down to the tens of thousands by next year, a target one of his own ministers has said is not on track, said Farage was wrong.

Nick Clegg, the leader of the Liberal Democrats, the junior partner in the coalition government, said Farage’s “mask” was starting to slip to reveal a nasty view of the world, while

Some of Britain’s most powerful right-leaning tabloid newspapers, which have for years themselves railed against both the EU and immigration, also turned on Farage, suggesting he had gone too far with his latest comments.

The Sun newspaper, owned by Rupert Murdoch’s News Corp., ran a double-page feature asking its millions of readers whether Farage was the “voice of nation” or a “bigoted menace”, publishing a giant picture of the UKIP leader with two faces.

One half of the photoshopped image was undoctored; the other showed Farage with a stylised devil-like red eye laughing maniacally as lightning struck in the background.

In a full-page advert in the Daily Telegraph, a publication traditionally favoured by Conservative voters, UKIP hit back.

“Let me be clear – UKIP is not a racist party, and our immigration policy, far from being racist, aims to end discrimination against non-Europeans,” wrote Farage.

His concerns about Romanians centred on Romanian criminals moving to Britain, he added, saying the “vast majority” of Romanians “would make good neighbours.”

Tim Loughton, a Conservative lawmaker, told the BBC the ad campaign showed UKIP was in trouble.

“No other party leader has ever had to take out a full-page advert in a national newspaper to say oh I’m not racist.”

UK Prime Minister David Cameron wants to place a cap on workers and cut immigrationfrom Europe as he seeks to renegotiate Britain's relationship with the European Union.

>> Read: Cameron to ask Brussels for cap on EU migrants

Cameron said the UK needs to change the way migrants can claim benefits and the number coming over to work, as he set out key areas for discussion with other EU members.

Cameron's Conservative Party recently rushed through a bill curbing claimants' access to benefits. The package, which coincided with the lifting of labour restrictions, would stop EU citizens from lodging a claim until they had been in the country for three months.

France and Germany accused Cameron of treating the EU like an "à la carte menu" from which he could pick powers. The opposition Labour Party said Britain risked sleepwalking towards EU exit.

But Germany, Austria, the Netherlands and Italy share Britain's concerns about unfettered European immigration and want the issue of free movement and social security addressed.