Catalan pardons are welcome but the political conflict is not over 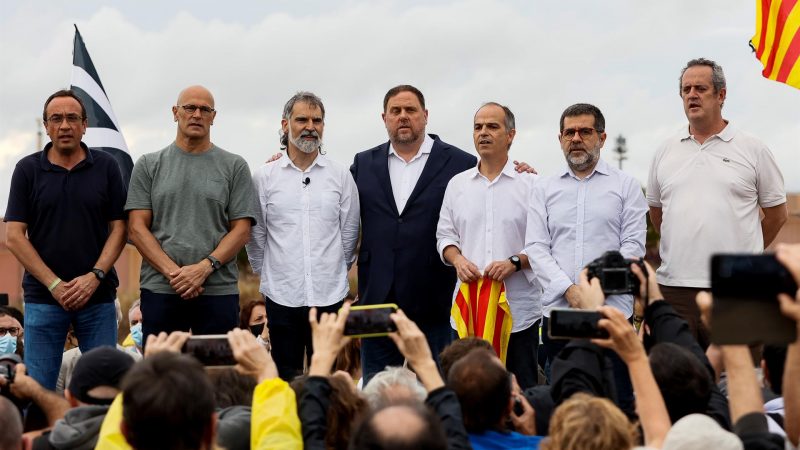 The release of nine Catalan pro-independence leaders is a welcome end to years of suffering. But the political battle is far from over, writes Jordi Solé i Ferrando.

Jordi Solé i Ferrando is a Greens/European Free Alliance member of the European Parliament.

After nearly four years in prison, nine Catalan pro-independence political and civil society leaders have been set free after the Spanish government decided on Tuesday (22 June) to grant them a partial pardon.

Their jail terms are over at last – pending a final decision from the Supreme Court if the decree is judicially challenged – but the prohibition to run for or hold office will still be in place for many years.

The decision by the government of Prime Minister Pedro Sánchez is to be welcomed for two main reasons. Firstly, it will put an end to the long-suffering of those directly benefiting, and that of their families.

Secondly, it should pave the way for a new phase where the political conflict between Catalonia and Spain can finally be addressed politically, through dialogue, negotiation and mutual respect. For despite the pardons, the conflict is not over.

The decision to grant these pardons – heavily contested by the right-wing PP and Ciudadanos parties, and the far-right, neo-Francoist VOX party – has been a political one.

In the same way that it was a political decision by former Spanish prime minister Mariano Rajoy – enthusiastically backed at that time by Sanchez’s PSOE – to take a hard line against the pro-independence movement, using police violence, judicial persecution and the temporary suspension of Catalonia’s home rule.

In that sense, the fact that Sanchez has changed course may be seen as a victory for the Catalan pro-independence movement and its international campaigning.

Also at play is Europe’s unease with a situation that could last no longer without putting at stake the EU’s internal and external credibility as an actor committed to fundamental rights, as well as the fear that European courts – particularly the European Court of Human Rights – might at some point inflict a defeat upon the Spanish court that convicted the Catalan leaders for sedition without ever proving the existence of violence.

Furthermore, the persistent positive performance of pro-independence parties at the polls – they are currently ruling the Catalan government with a majority in parliament – shows that the path chosen in 2017 by the main Spanish parties has been a failure in terms of weakening pro-independence feelings at the ballot box.

It should also be noted that there are still countless ongoing legal proceedings against pro-independence supporters. To mention just a few, more than 30 high-ranking officials are being criminally prosecuted for their alleged role in the 2017 independence referendum.

Over 40 of them – myself included – are being economically harassed by the Spanish Court of Auditors with multi-million euro fines for expenditures related to the Catalan government’s foreign action.

Other citizens have been or may be convicted for their participation in mass protests. And there are still politicians in exile, in Brussels and in Geneva. The pardons will not change a single thing about their situations.

That is why the proper and courageous response would be a general amnesty for all those convicted or prosecuted after the events of 2017.

Given that this prosecution is of a political nature, amnesty would be the fairest solution, and the only one that could really open a completely different context for political dialogue to finally take off.

The Catalan leaders will soon be with their families again. But they should never have been put behind bars in the first place.

They are not criminals, and they have committed no crime. They simply organised a democratic referendum, something which not even the Spanish criminal code says is a crime. It is time to look ahead, and everyone must learn from their own mistakes.

It is about time to engage politically in favour of a democratic solution. But Spain’s abuses of the rule of law in order to silence a democratically legitimate political movement, still need to be addressed.