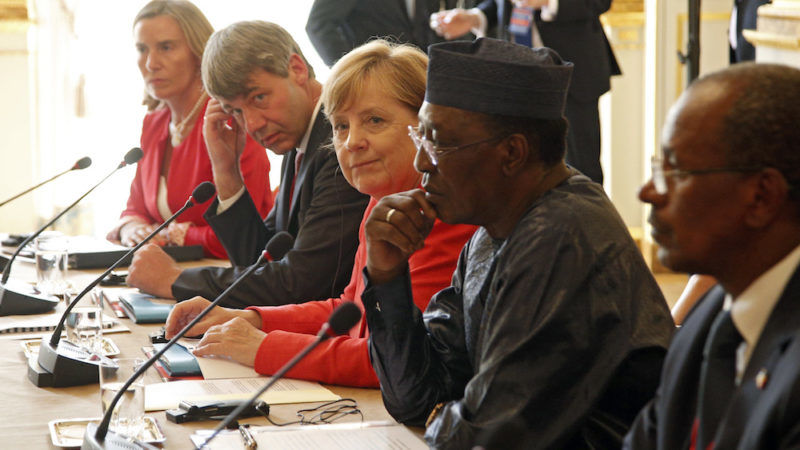 German Chancellor Angela Merkel (C), Chadian President Idriss Deby Itno (2-R) and EU Foreign Policy Chief Federica Mogherini (L) sit for a meeting at the Elysee Palace in Paris, France, 28 August 2017. Leaders from Germany, Spain, Italy and the EU meet with their counterparts from Niger, Chad and Libya in Paris for discussions on how to stem economic migration. The meeting is organized by French President Macron. [EPA-EFE/Thibault Camus]

It is high time that member states move away from their intention to close EU borders and instead show strong forward-looking leadership on migration policies, writes Leïla Bodeux.

European leaders must ensure that migrants and refugees are humanely treated, without sacrificing European core values. Protecting and promoting migrants’ rights, needs and aspirations is a crucial necessity that is becoming more important than ever considering the recently documented atrocities taking place in Libya, for instance.

Local Italian Caritas are assisting and hosting migrants who have been through Libya and who describe it as a “living hell”. Many have reported that they have witnessed or suffered from torture, abuse, and even the murder of migrants in Libya.

The unbearable suffering of some 700,000 migrants trapped in Libya has been widely documented by UN bodies, experts and NGOs, and publicly exposed in the infamous CNN video showing African migrants being auctioned off as slaves. Everyone is now aware of the terrible conditions in which these men, women and children are retained and are conscious of the systematic abuses they are suffering.

The EU and its Member States cannot look away any longer. They must put an end to the ongoing financial, material and technical assistance offered to Libyan coastguards. At least 46 million euros has been used to fund the Libyan coast guard from the EU Emergency Trust Fund for Africa, which is supposed to improve economic opportunities and living conditions for people in Africa. The situation has been ongoing for almost a year, yet assistance has repeatedly proven inadequate. The UN Human Rights Chief has described the EU’s policy of assisting the Libyan Coast Guard to intercept and return migrants in the Mediterranean as inhumane. Moreover, the situation has even led the NGO ASGI to bring a court action in Italy against the country’s Ministry of Foreign Affairs and International Cooperation for the misuse of development aid.

Policy makers must cease turning a blind eye on the negative impact their cooperation policies with Libya is having on people’s lives. Today, most migrants remain stuck in Libya or are being pushed back at sea by the Libyan coast guard and returned to detention camps with the EU’s blessing. The government of Italy has even been accused of directly financing Libyan criminal gangs to stop migrants from arriving to Europe. Evidence is piling up of incidents during which the Libyan coast guard’s response has been dangerous, affecting both migrants and NGO rescue missions.

The indignation provoked by the abuses reported in Libya needs to translate into courageous, sustainable and visionary policies that go beyond the actions and policies put forward after the EU-Africa Summit in Abidjan. These focused notably on the evacuation of migrants stuck in Libya for resettlement and voluntary return to their home countries through IOM and UNHCR. “Voluntary” return can be an alleviating option for some migrants, but what about those in need of protection for whom returning home is impossible as it may be synonymous with death?

The proposal to evacuate people from Libya to Niger in order to be resettled to a safe country is also welcome, but on the condition that enough countries step in and pledge to resettle a significant number of people. Otherwise, people transferred to Niger risk finding themselves stuck in another limbo situation, where stability is precarious. In addition, UNHCR itself recognises the practical difficulties to carry out resettlement and identification from Libya due to the huge security constraints and limited access to detention centres. The fact that the UNHCR mandate is restricted to protect only people from a list of 7 countries, imposed by the Libyan government, confirms the complexity of the current situation in Libya and one of the many challenges posed in protecting migrants’ rights.

Despite this, one clear action the EU needs to take is to use all the leeway it has to dismantle detention centres and cease counter-productive policies that legitimise blatant human rights violations in the name of migration management. Besides, these policies are fuelling the detention business and further eroding the rule of law and stability of Libya. Cooperation with Libya must be seriously overhauled to ensure that EU obligations under human rights and refugee laws are upheld.

Civil society organisations have been relentlessly advocating productive policies that would benefit both the EU and migrants, such as the opening of safe and legal pathways to arrive to Europe. These could be in the form of raising the number of people being resettled, fostering family reunification procedures, issuing humanitarian visas, and establishing mechanisms that facilitate migration, as agreed under the Sustainable Development Goal framework (SDG 10.7).

UN Secretary-General Antonio Guterres recently reminded, “We will not put an end to the tragedy in the Mediterranean if we do not create significant, legal migration opportunities. We must also ensure that people can find a dignified future in their home country.” Unfortunately, today’s EU migration policy is clearly undermining this objective.

Migrants and refugees need a strong and united EU that commits to defend their rights. The recent public brawl between the European Council’s President Donald Tusk and the European Commissioner for Migration Dimitris Avramopoulos about the EU’s response to migration and the establishment of a solidarity sharing mechanism is the last thing the EU and migrants need right now. It is high time that Member States move away from their intention to close EU’s borders and instead show strong forward-looking leadership on migration policies.  As Commissioner Avramopoulos rightly put it in a recent opinion piece, we need to change the negative narrative on migration to adopt long-term balanced policies on mobility and integration. Mr. Avramopoulos is spot on, but will policy makers walk the talk now?