Is Europe’s ‘refugee deal’ giving in to blackmail by Turkey? 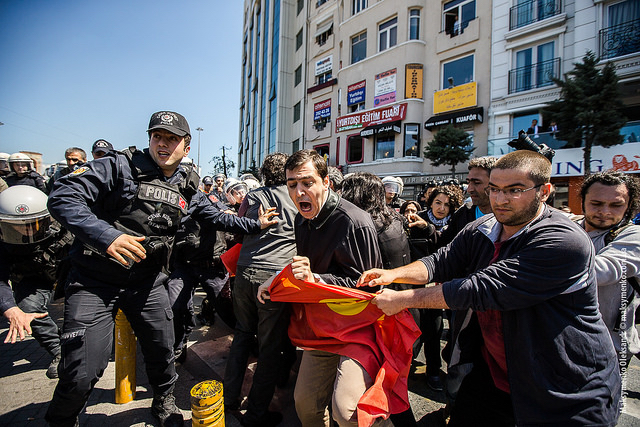 Is Europe’s refugee crisis so distorting its political judgement that the European Union is entering in to what Turkey’s own pro-government newspapers have called a “bloody exchange”,  winning agreement on controlling migration movements in return for help,  which Turkish President Erdogan is using in efforts to “buy” disputed elections to be held on 1 November?

In which other country would independent television channels be blocked, journalists arrested, and opposition parties too frightened to hold campaign rallies in advance of an election – yet the European Union stays virtually silent in response?

Why has there been a highly unusual postponement of the always eagerly anticipated publication of the annual ‘progress report’ on Turkey’s EU accession prospects?

Friday night’s provisional agreement (16 October), an EU-Turkey Action Plan, must surely not be allowed also to “buy” European silence at deteriorating democratic and human rights standards, at a crucial moment in Turkey’s history.

The Istanbul bimbing saw the hovernment accuse Kurdish PKK terrorists of responsibility, despite the rally itself being co-organised by Kurdish organisations, to call for a restoration of the peace process, to end the years of bloodshed involving their community.

“Hundreds of attacks and thousands of arrests” are claimed by the Kurdish HDP party against their members, including the killing of 21 civilians in Cizre, and some 20 further murders since.

It was that party’s success in reaching the minimum 10 per cent threshold in elections earlier this year which denied Erdogan’s AK Party reelection, and forced the rerun poll, at which he hopes to defeat them.

An often reliable government whistleblower who tweets under the pseudonym Fuat Avni, had on 16 September already predicted the bombing of political rallies as part of the governing AKP’s electoral strategy.

The same whistleblower said that President Erdo?an was behind another deadly suicide attack in Suruç last July, despite the fact that the government is once again blaming terrorists.

Incidentally, Fuat Avni also claimed that Erdo?an’s son Bilal had moved to Italy last month – information now confirmed by official sources – with claims that he left the country “with large sums of money”, fuelling speculation that the Turkish leader himself is preparing a bolt-hole, should he lose at the November elections.

Opposition parties have now cancelled campaign rallies, with opposition CHP party leader Kemal K?l?çdaro?lu asking: “I do not want to directly blame anyone, but tell me is this how the country should be governed?”

At the very least, this week’s events have underlined the deep polarisation that divides Turkish society and which threatens its democracy. At the national team’s football match with Iceland, the one minute’s silence for the 99 peace rally dead, was unbelievably booed by pro-government supporters.

But it isn’t only the government’s political opponents who have been subject to intimidation.

In the last week too, Bulent Kenes, editor of the renown English language-daily Today’s Zaman was arrested, apparently for the newspaper’s reports which challenged the government. This followed fines and suspended prison sentences against senior journalist Ugur Dündar for insulting a former transport minister, and against another journalist, Necati Do?ru, for insulting Erdo?an himself.

All but one of Turkey’s independent television channels have been taken off the broadcast platform, leaving many in the country’s population largely unaware of these developments.

But negotiations in Ankara last week, and the deliberations by EU leaders in Brussels on Friday, managed to all but overlook these grave concerns, and instead enter in to the ‘cash for cooperation’ deal which risks endorsing Erdo?an’s actions.

The view in the corridors in Brussels is that Erdogan feels he can “turn on-and-off the taps” of refugee flows, effectively holding the European Union to ransom.

And the charge is that a petrified European Union is acceding to the blackmail, and about to be hand over a payoff of up to £2.2 billion in response.

Of course there is some merit in what the EU is trying to do.

Although Human Rights Watch accuses Europe of seeking to create a “dumping ground” for asylum seekers in Turkey and other neighbouring countries, there is certainly a humanitarian case to improve the dire conditions for the two million desperate Syrians in Turkish refugee camps, where food rations have recently been cut in half.

But the motivation is to stop them moving, if Europe is to be honest about its approach.

I find it distasteful that refugees who have experienced such suffering are being treated as mere bargaining chips.

Politicians must ensure that the final EU-Turkey agreement complements and is not be a substitute for EU governments acting in line with their asylum obligations under international and EU law.

The apparent deal being negotiated by Turkey appears to offer cooperation in accepting the return of failed asylum seekers, in exchange for moves to ease Turkish citizens’ ability to travel to EU countries.

Like other reported elements of the final deal, involving the unblocking of some negotiating ‘chapters’ blocked by Turkey’s strong critics amongst EU countries, such ‘visa liberalisation’ could be justified, and has been denied to Turkey compared to other EU candidate countries for discriminatory reasons.

Nevertheless, it is ironic that one of the chapters which may be opened is on monetary policy, when money is at the heart of this deal.

Equally, tell the families of the 99 killed in the Istanbul peace rally bombing, that Europe is negotiating a deal in which it pronounces Turkey to be a “safe” country, for the purposes of immigration, but not for its own population.

Europe must be careful that it is not only being blackmailed, but being swindled too.

There are serious questions as to whether Erdogan can deliver on his promises.

In any case, Europe must not be silent over the huge challenge to democracy and human rights, in a country for which we should still fight to be part of our common European future.

If Erdogan loses the November elections and runs away, European inaction now will look shameful.

If Erdogan wins the election using European endorsement and European money, that shame could last for a very long time, indeed.

0 responses to “Is Europe’s ‘refugee deal’ giving in to blackmail by Turkey?”