By Rocco Paolillo and Wander Jager

The refugee crisis has presented some unique challenges to European society. [Freedom House/Flickr]

Immigration policies often miss that migration is not only a matter of managing an influx of people. A social complexity perspective contributes to a more systemic view, write Dr. Wander Jager and Rocco Paolillo.

Dr. Wander Jager is an associate professor and Rocco Paolillo is a guest researcher, at the Groningen Centre for Social Complexity Studies and University College Groningen.

The refugee crisis Europe is experiencing is the biggest ever faced, considering that more than 1,000,000 asylum seekers up to now have crossed EU borders and the trend is likely to keep growing. The main concern emerging from the European Agenda on Migration and the recent international treaties seem to be solely the large number of refugees and how this could impeach the asylum system improved through the years.

The question basically is reduced to intensify the borders or to admit asylum seekers relocating them. Such policies do not catch how the management of the influx is just one facet of the matter, not considering the social aspects of the relation between host and migrants. In fact, an emerging polarisation in the host societies in Europe as a consequence of the migration flows is evident, splitting the citizens between those willing to accept refugees for humanitarian rights and those refusing them praising the initiative to intensify the borders.

Clear indicators of such a polarisation in public opinion can be found in rallies as in the days following the attacks in Paris and Brussels or the many conflicts on allocating sometimes large groups of asylum seekers in villages. This increasing polarisation threatens the inner stability of the host society and it is likely to have worse consequences in the future, considering that most of the asylum seekers are likely to settle in Europe.

Our opinion is that the current policies adopted by the EU lack a perspective on the social dynamics that emerge from the refugee crisis, and we state that a social complexity perspective may contribute to developing more adaptive policies. The social complexity perspective describes how social phenomena such as polarization are the emergent collective results of interactions between individuals, who are not just a number to add to a sum, but active actors contributing to the development of society through their own attitudes and beliefs.

We suggest that if policy makers adopted a complexity view, they could better understand how acculturation processes like integration, assimilation, separation and marginalisation are complex social processes that “grow” into a society. This deeper understanding of complex social dynamics also opens a perspective on developing policies that address the level of social interactions between different groups.

In terms of social complexity, the exclusive focus of policy on controlling and distributing numbers of migrants is an example of quantification, trying to find a quantitative benchmark of success. The risk of such a quantitative approach resides in the compartimentalisation of the problem, that is, erroneously considering each aspect of the issue, such as number of migrants or attitudes of citizens, as independent rather than interconnected.

This in turn increases the risk of emerging polarisation in the population as an unintended spillover effect of policies aimed at distributing numbers of refugees. A social complexity perspective would focus on both the influx of migrants as well as on the possible interactions between host and migrant groups, thus addressing how opinions and social networks may develop as a consequence of migration policies. Assuming such premises, it might be understandably difficult for policy makers to deal with this complexity.

Here social simulation models can contribute to a richer perspective by visualizing migration and acculturation processes in artificial societies. Given certain attributes of both migrant and host groups as ethnic belonging and tolerance for diversity, it can be there explored how they contribute to the emergence of acculturation processes and under what conditions they can lead to conflicts.

Rather than just focusing on the numbers, a complexity perspective confronts migration policy with questions regarding how to create conditions for a society to adapt to a new social fabric where cultural belonging and tolerance for diversity might be put to the test, allowing for robust networks to grow rather than creating societal separations with potential risks of conflict.

Exploring different “what if” scenarios may reveal unexpected consequences of policies on these social aspects and hence make policymakers more sensitive for unintended spillover effects. It is our belief that a social complexity perspective and the use of social simulation is helpful to policy makers: while social complexity can offer a deep perspective on the definition of the problem, computer-based simulations can be a tangible tool for policy design. 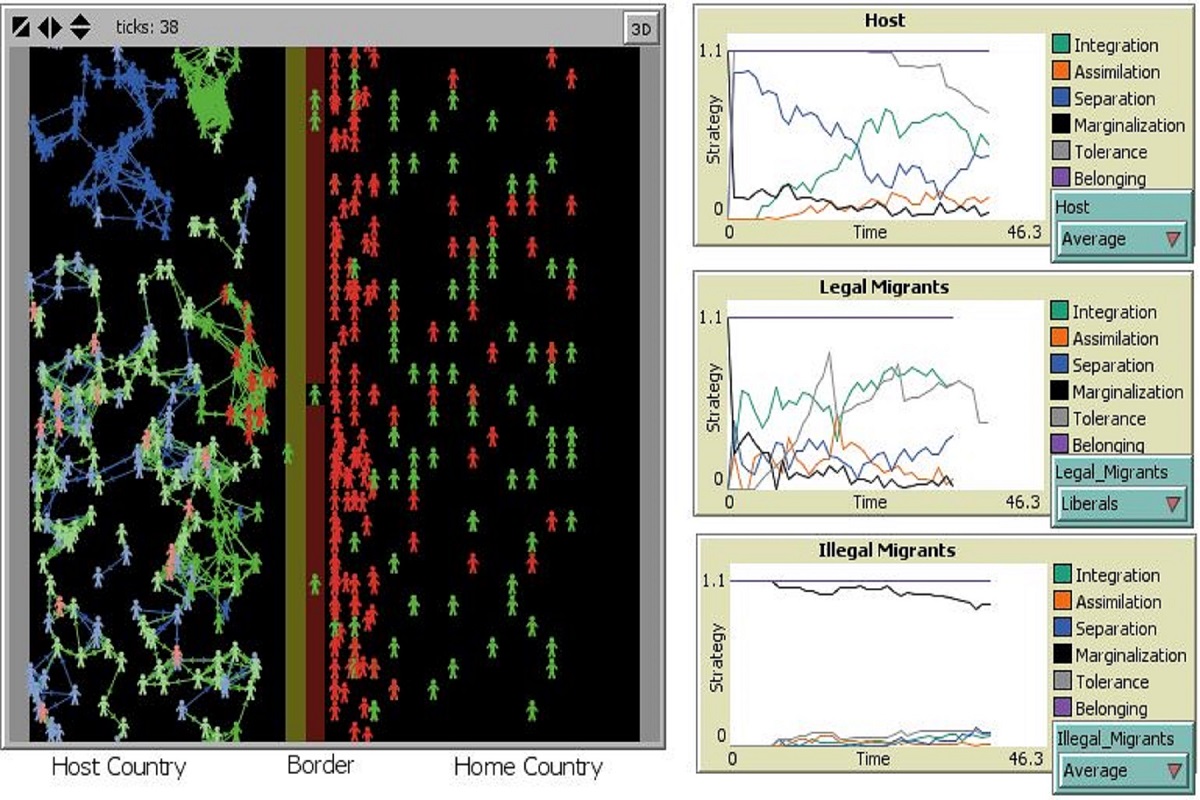 Graph on left shows a simulation of an artificial society. The lighter figures are more tolerant, why the darker ones are less. The graphs on the right show how tolerance and ethnic belonging evolve over time.

The continuous influx of migrants requires long-term policies that do not consider migration as an allocation problem, but that envisage future developments in the deep social fabric of European culture. Social complexity and social simulation can undoubtedly be an advantage to this aim, but a bridge has to be built between research and politics, since if politicians are to take decisions, researchers have to clarify the possible impacts of decisions in a social complex environment.