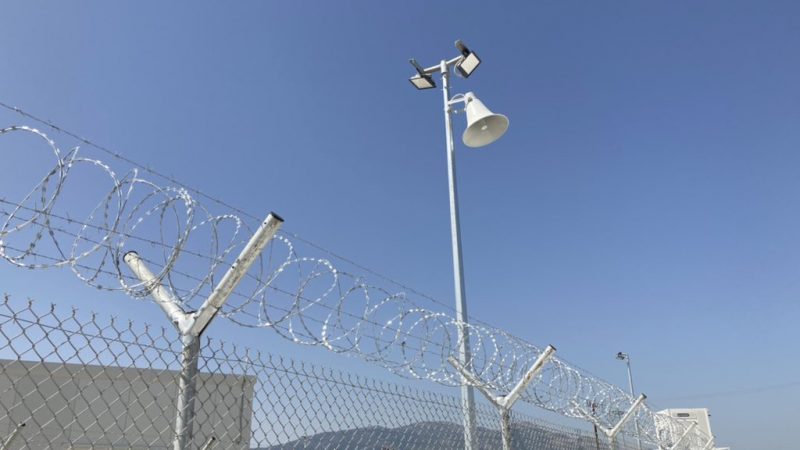 Petra Molnar is Migration and Tech Monitor at the Refugee Law Lab, Centre for Refugee Studies

“If we go there, we will go crazy.” On the Aegean paradise that is the Greek island of Samos, Aina, a young mother from Afghanistan seeing refugee protection with her baby and husband, is scared. On the eve of a forcible relocation to a brand new “closed controlled access centre” located 10 kilometres outside the capital city of Vathi, hundreds of refugees are waiting to be transferred to a camp surrounded by barbed wire, a “two-factor access control system,” turnstiles, magnetic gates with kilometres of “double NATO-type security fence,” and “smart software” to notify the Local Event Centre and the Control Centre in Athens.

Few people were able to see inside the new camp at the official opening ceremony on 18 September. Once inside, the “closed and controlled” aspect of this centre becomes clear. Cameras, loudspeakers, and various surveillance technologies are peppered throughout the camp. The Samos camp is the first in a series of new centres full of various surveillance technologies and has been widely lauded as an “important milestone” in the management of migration by the European Commission. Indeed, Samos is the first such centre to open, part of 5 such proposed refugee camps on the Aegean islands, each boasting an integrated surveillance system of cameras, drones, and motion-detection algorithms called Centaur. This surveillance panopticon is entirely funded by the European Union.

Borders continue to be the setting of various migration management experiments supported and actively encouraged by the EU. Codified in its Migration Pact, these policies and conferences are replete with explicit messaging around the ‘management’ of migration, a ‘Europeanized’ deportations process, protecting the border, and strengthening the work of Frontex, the EU’s border force. One of the ways to strengthen its migration management machine that the EU is increasingly exploring is various technological experiments. Technologies such as automated decision-making, biometrics, and unpiloted drones are increasingly controlling migration and affecting millions of people on the move globally. Currently, very little regulation exists to regulate the impacts of high-risk technologies, and while the EU’s proposed Regulation on Artificial Intelligence grapples with the far-reaching impacts of border technologies, it does not go far enough. Even the UN’s Human Rights Chief Michelle Bachelet has called for a moratorium on high-risk technologies, including at the border.

Greece is, of course, just one of the many locations across the world where technological experimentation at the border is given free rein and our ongoing work attempt to knit together the tapestry of the increasingly powerful and global border industrial complex, which legitimizes technosolutionism at the expense of human rights and dignity. These technological experiments also do not occur in a vacuum. Instead, powerful actors – and the private sector – increasingly set the stage of what technology should be developed and deployed, while communities experiencing the sharp edges of this innovation are consistently left out of the discussion.

Documenting how border tech experiments are playing out is an attempt to highlight how power operates in society – and how technology reinforces hierarchies of oppression. Technology is not neutral but is wielded by powerful actors against communities historically made marginalized – including people on the move, who are trying to make a new life in a world which is increasingly hostile towards them.

This surveillance panopticon is part of an increasingly securitized migration management regime. Yet, the people I speak with are fearful of what is to come. Some call the new camps a “prison”, and they are worried about being far away from services and always watched. While the conditions in many of the current camps are deplorable, securitization and surveillance only serve to further dehumanize people seeking protection. Right after I said goodbye to Aina, a huge fire broke out in the old camp of Samos. Watching the flames engulf people’s tents, it’s hard to believe the EU’s endorsed alternative is a secluded encampment full of surveillance.