The Brief, powered by APPLiA – Blackmail over borders 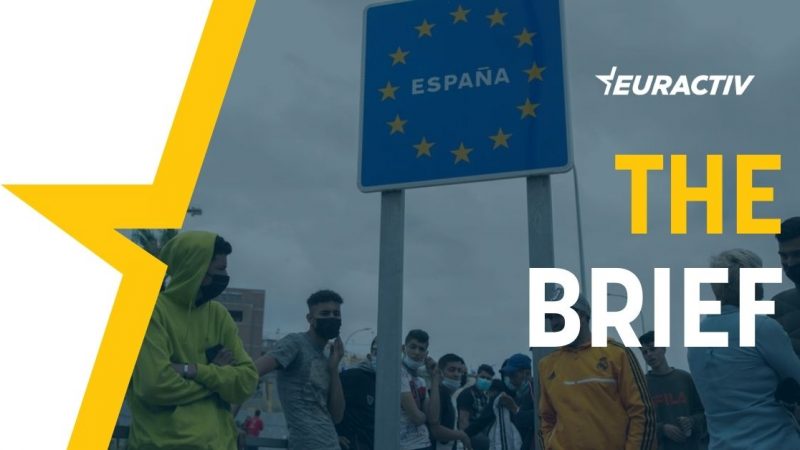 When Margaritis Schinas says that “no one can blackmail the European Union”, Morocco and other neighbourhood states might well think that the EU’s Migration Commissioner is bluffing.

The decision by Rabat to allow thousands of migrants into the Spanish enclave of Ceuta last week is a reminder of how quickly migration can be weaponised and used as a bargaining chip.

Moroccan officials have hinted that its border manoeuvres were a response to Spain providing hospital treatment for Brahim Ghali, the leader of the Western Sahara independence movement, the Polisario Front, who was suffering from COVID–19.

The Spanish authorities insist that this was done on humanitarian grounds and not as a gesture of political support.

Migration is no longer the existential crisis that it appeared five or six years ago. That has allowed national governments to quietly kick the Commission’s plans for an immigration and asylum pact into the tall grass without many people outside Brussels noticing.

But while the questions posed by the 2015 crisis remained unanswered, anti–immigration rhetoric and policies are now very much part of the European mainstream.

Michel Barnier has hinted he would put tight migration controls at the centre of his campaign should he confirm a bid for the French presidency.

In Denmark, the Social Democrat–led government is so determined to meet its target of zero asylum seekers that it is seeking to do deals with countries like Syria and Rwanda to return refugees and police asylum applications.

Last week, the Hungarian government warned that it would veto the successor to the Cotonou Agreement between the European Union and the African, Caribbean and Pacific community on the grounds that it would lead to more African migration into Europe.

The new deal is actually tougher than its predecessor on readmission and returns, though clearly not enough for Viktor Orbán.

The EU can hardly criticise them for having also sought to effectively outsource border control, offering financial incentives to the likes of Egypt and Morocco to keep tight control of would–be migrants.

The trouble with that tactic, as the EU has found in its dealings with Turkish President Recep Erdoğan, with whom it agreed the blueprint of ‘cash–for–migrants’, is that despite paying, the bloc is still at the mercy of its partner.

It is not obvious that Morocco’s tactics are smart diplomacy. Spain has traditionally been one of Rabat’s strongest allies, both politically and economically, as a bilateral partner and within the European Union.

With Morocco’s trade relations with the EU still the subject of perennial court challenges, targeting an ally looks unwise. Yet the Rabat government would not have opened its borders if it was not confident that there would be no retaliation.

And so it has proved. Prime Minister Pedro Sanchez has played down any dispute, though Spain’s response – deploying several thousand troops and police – underscores that the threat of unleashing migrants into Europe remains a potent one.

The European cloud project Gaia-X, which aims to ensure Europe has its own trusted data and cloud infrastructure, came one step closer to becoming operational after the first specification round of the Federation Services was completed on Wednesday (26 May). EURACTIV Germany reports.

Three years after the original proposal, the EU’s game-changing Health Technology Assessment (HTA) dossier has at last reached interinstitutional negotiations, but a number of challenges remain.

The EU needs to tackle social dumping and fraud in the construction sector that has been led by an emerging business model of exploitative labour, argues Tom Deleu in an interview with EURACTIV. That means targeting shell companies and a ban on intermediaries

The European Union and Japan have reaffirmed their “shared ambition of reaching net-zero greenhouse gas emissions by 2050” at the conclusion of a bilateral summit which included the signature of an EU-Japan “Green Alliance”.

Tough control mechanisms will allow the EU to claw back misspent funds from the bloc’s ambitious Recovery and Resilience Facility (RRF), EU officials said at an event organised by EURACTIV on Tuesday (25 May).

The COVID crisis has increased social equalities across Europe, from access to education, to work, medical treatment, and housing. The widening gap goes hand in hand with reqional disparities, and this dangerous downward spiral is something the EU’s cohesion policy aims to put a stop to.