The Brief, powered by EHFG — Replacing tents with concrete 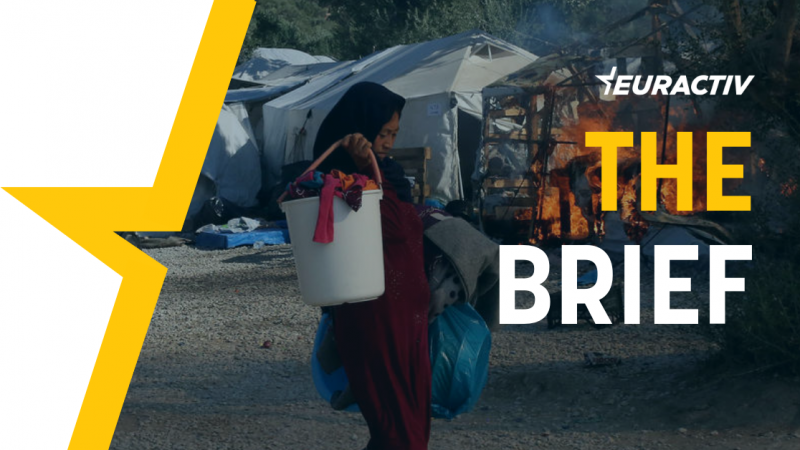 The EU’s repackaged migration pact could be finalised in the weeks after next year’s French presidential elections. At least that’s what Commission Vice-President Margaritis Schinas told this website.

Mr Schinas will have to forgive us for not getting out the ticker tape.

It is a measure of just how low expectations are that Schinas can suggest the possibility of an agreement next year – perhaps, if Emmanuel Macron wins a second term in the Elysee Palace  – as some sort of a triumph.

The Pact on Migration and Asylum—which is focused on keeping refugees out of Europe—is weak on burden-sharing and entrenches the new vogue of shifting rather than sharing responsibility, and is, overall, remarkable in its lack of ambition. But it is still too much for some member states.

The era of European generosity to refugees and asylum seekers, if it ever existed, is over. Supposedly moderate parties now compete on who can talk toughest on migration control. In Denmark, a Social Democrat-led government is hoping to outsource migration and asylum processing to several African states.

If a common EU policy on migration is still a pipedream, the question is: What are we left with in the meantime?

The answer is likely to be a combination of illegal pushbacks – as EU countries instruct their border forces to push migrant boats back where they came from – and concrete camps inside and outside Europe.

Close to the site where the Moria camp burned last year, an EU-funded migrant camp has sprung up. The so-called “Moria 2.0.” is a physical upgrade on the tent cities on the Aegean Islands but, replete with turnstiles, barbed wire, cameras, and electric fences, this is about keeping migrants and refugees separate from society.

It is hard to pin the blame on Greece, which finds itself at the mercy of whether Turkey decides to open up its borders, and without the prospect of support from its EU neighbours.

The European Commission, meanwhile, faces a near impossible balancing act: attempting to placate national demands for more help policing their borders while trying to ensure that EU funding is not used by member states to build border fences, push back migrants and break international law on asylum.

The message of Commission President Ursula von der Leyen’s State of the Union could hardly have been clearer on the prospect of Afghans needing refuge: Don’t come to Europe.

That may be the only message voters want to hear but the bitter irony is that creating ‘Fortress Europe’ is an act of economic sabotage with dire long-term consequences.

In the meantime, for all the talk of ‘European values’, what we are left with is a combination of low expectations and even lower ambition.

The EU’s 27 energy ministers will meet in Slovenia on Wednesday, and are set to discuss two proposals — regarding renewables and energy efficiency, respectively — within the ‘Fit for 55’ package. Both pieces of legislation require EU countries to step up in order to meet the European Commission’s targets.

Spain has urged the European Commission to create “a European policy menu predesigned to react immediately to dramatic price surges” for power and electricity. European gas prices have increased by roughly 250% this year, due to outages, low stock levels and high demand in Asia, subsequently increasing wholesale electricity costs.

And on that note, Poland continues to refuse the closure of its Turów coal mine and power plant, despite a daily €500,000 fine from the European Court of Justice. The fine stems from an ongoing case regarding the Czech Republic’s concerns about the impact of the mine, which sits on the border of the two countries.

Erasmus+, the app for EU students studying abroad, received significant updates on Tuesday, including the option for students to select their study abroad destination from their phone, sign necessary documents and get useful tips about their destination. Commission Vice-President Margaritis Schinas said the app is becoming more like Erasmus students: “more digital, more mobile, and more community-oriented.”

Vice-President Schinas has said that the long-awaited European migration pact should be approved after next year’s French elections — and that doesn’t sit well with Hungarian Justice Minister Judit Varga, who says Schinas is attempting to hide migration plans from German and French voters. Hungary is one of the fierce opponents of the Commission’s plan.

But ahead of Germany’s election this weekend, EURACTIV asked all major political parties to clarify their stance and visions on migration. The major parties broadly agree that the EU’s migration regime should be strengthened, but the difference lies in each party’s specific priorities.

The European Court of Human Rights has ruled that Russia was responsible “beyond reasonable doubt” for the 2006 death of dissident former agent Alexander Litvinenko, who died after drinking tea laced with the radioactive isotope at a London hotel.

Italy launched on Monday its national hub against disinformation, which will bring together fact-checkers, media practitioners and researchers to fight online disinformation and fake news. Italy’s is part of a European network of eight national hubs.