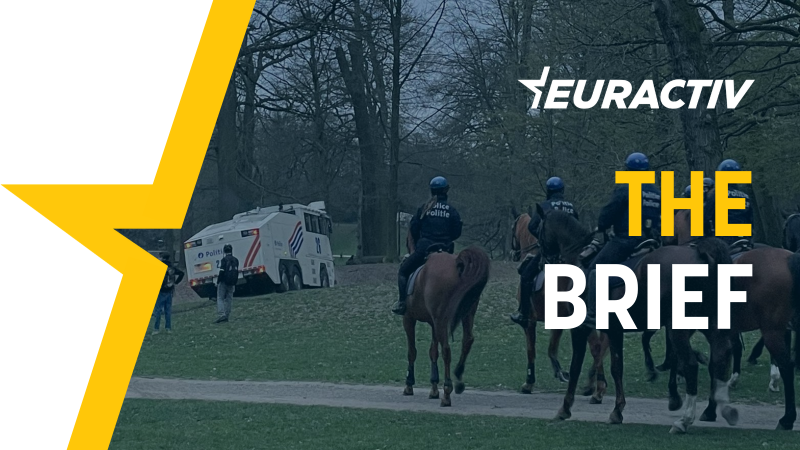 A crowd running from water cannons. An accredited journalist refused entry. The roar of police helicopters above a horde of shielded officers. Riderless horses roaming the streets.

You’d be forgiven for thinking this was a scene from an uprising.

But you’d be wrong. This was the culmination of a casual Friday evening stroll through the Bois de la Cambre park in the heart of Brussels, the home of EU institutions.

A day after the infamous April Fools protests, a fake festival-turned-protest over COVID-19 lockdown measures, the Belgian police were out in force to show they were nobody’s fool.

Hundreds of officers assembled to pre-empt the actions of what a spokesperson for Brussels Mayor Philippe Close said was a protesting crowd of “around 100” people, in which passersby (the authors included) found themselves inadvertently caught up.

As officers shouted something indiscernible over megaphones, we attempted to circumvent the crowd, only to find all exits to the park blocked.

Justifying the authorities’ chaotic handling of the situation, the mayor’s spokesperson said that the federal government has a clear rule for socially distanced protests of more than 50 people provided authorisation is requested, but that “in this case, it was not respected”.

All citizens including journalists were “free to file a complaint” if they felt mistreated, the spokesperson added.

But this disproportionate flexing of police muscle left the distinct impression the authorities were overcompensating for something – perhaps their highly criticised handling of the incident the previous day, which saw one protester knocked to the ground by police horses.

Or perhaps it was the lack of an appropriate legal basis? After all, these theatrics came a mere 48 hours after a Belgian court ruled that all of the country’s COVID-19 restrictions must be lifted as they were lacking solid legal grounds.

The state has since appealed the ruling, but it’s difficult to see why this judicial slap on the executive’s wrist did not give it pause before it unleashed brute force on a couple of hundred citizens protesting the very same measures.

One week on, why make such a big deal about an unpleasant and unexpected evening in a Belgian park? Because, as the ‘rally around the flag’ effect from the first lockdowns fades, protests like these are now being seen across Europe on a weekly basis.

Regardless of where you stand on the lockdown measures, the carte blanche we have given our governments (or they have granted themselves) after the initial shock of the onset of the pandemic should have an expiration date.

The right to gather and protest lies at the heart of modern democracies, but on an increasing number of occasions, it appears to exist in name only.

All this begs the question: how comfortable are we with where the new line of acceptance has been drawn when it comes to the powers the state can exert over citizens? Has this new line been drawn in the sand, or set in stone? And how far does this weaken rule of law?

As courts across the EU scrutinize, and at times, strike down COVID-19 measures, civil society organisations are sounding alarm bells about the deteriorating health of our democracies, and not only in Central and Eastern Europe.

While all eyes are on the here and now, let us not lose sight of the kind of future that lies ahead.

On a positive note, at least we can report that Belgian police horses are well-behaved. EURACTIV correspondents saw the riderless animals calmly trotting home on the street, even apparently respecting road signs. Whether their masters are as disciplined is up for debate.

EU27 ambassadors gave the go-ahead to the Council’s position in the upcoming negotiations with the European Parliament on the Digital green certificates, a tool conceived by the European Commission to ease travel restrictions in the summer season despite the pandemic.

Denmark announced it would stop using the AstraZeneca Covid-19 vaccine altogether, becoming the first European country to do so over suspected rare but serious side effects.

The European Commission, meanwhile, is seeking clarification from Johnson & Johnson about the company’s “completely unexpected” announcement of delays in COVID-19 vaccine deliveries to the EU.

The US announced it will ramp up its forces by 500  additional troops in Germany amid the latest tensions with Russia over Ukraine, in a reversal of former President Donald Trump’s plans to cut troops in the fellow NATO country by a third.

The EU executive will help countries work on encryption-breaking for when law enforcement has legal access to the information as part of a strategy to fight organised crime.

The EU’s deployment of charging infrastructure for electric vehicles is not quick enough to meet the bloc’s targets, EU auditors said.