The Brief — Show me the money 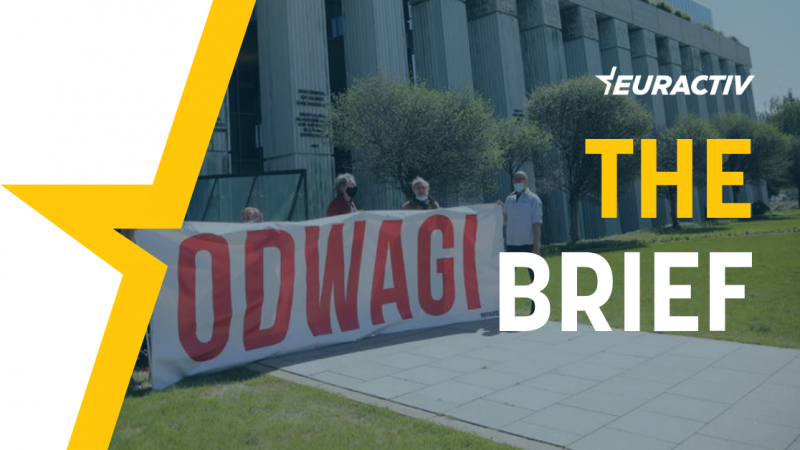 Fining countries for refusing to comply with EU law is one of the little-used sticks at the European Commission’s disposal. The success in using it so far has been mixed. There are numerous cases when the country in question has simply refused to pay up.

Despite their recent reputation, in purely statistical terms, Poland and Hungary are not the EU’s awkward squad. Around 1,500 active proceedings are currently underway against the EU’s 27 member states.

Poland ranked as the fourth-highest offender with 78 ongoing proceedings, behind Spain Greece, and Italy. Most of them relate to taxation and customs, followed by environmental proceedings and breaches of EU rules related to the internal market and industry.

What marks the EU executive’s decision on Tuesday to request that the European Court of Justice impose a daily fine on Poland is that this is a profoundly political matter. The Commission says the Disciplinary Chamber of the Polish Supreme Court undermines the functioning of the country’s justice system.

Perhaps even more importantly, it also hints at a change in tactics. There is no reason why the Commission will not seek to impose similar financial penalties on other member states, Hungary being the most obvious, for breaches of the rule of law requirements in the EU treaties.

The signs are at the Commission’s flexes towards Poland are working. Last month, the Polish government announced that it would shut down the Disciplinary chamber at its Supreme Court, though it is still yet to do so. It also serves as a warning to Warsaw to drop its legally pointless but politically explosive case on whether EU law has primacy over national law.

Even if Poland, and potentially others, refuse to pay fines for rule of law breaches, the EU now has other tools: The size of the Recovery and Resilience Fund gives the EU far more leverage than it has previously had.

In Poland’s case, at stake is more than €36 billion in grants and loans, two-thirds of it in grants, of vitally needed economic support. By refusing to approve the recovery plans of Poland and Hungary, the Commission is sending a clear signal

It’s not clear whether wielding the disciplinary stick will damage the Commission’s reputation in the court of public opinion, but it is still the right thing to do.

If governments are so keen to grasp multi-billion euro rescue programmes essentially financed by the bloc’s wealthiest members, they can hardly complain about being kept to their treaty commitments.

Following up from yesterday, the UK announced on Monday that it would once again extend grace periods on goods checks at the UK-Northern Ireland border. The EU has yet to make a move, but the European Commission says it will “take note” of the UK’s decision.

The European Commission asked the Court of Justice on Tuesday to impose daily financial penalties for Polish non-compliance with the EU’s temporary measures. The Polish government says it does not have the power to implement such measures and accuses the EU of blackmail.

According to a newly published report, open source software in 2018 boosted the EU’s GDP by €65 to €95 billion. However, the European Commission says the EU must increase investment in these technologies to fully reap their benefits.

Still on digital, the European Commission proposed before the summer an EU-wide framework to enable all EU citizens to have a digital identity but it did not urge countries to use blockchain in the process, although the technology seems quite fitting

In the Western Balkans, pollution from coal-fueled energy is six times over the EU limit. Western Balkan pollution has caused over 12,000 deaths between 2018 and 2020, but the region has not made efforts to decrease emissions. Experts say the EU needs to add more pressure.

G20 health ministers unanimously signed the ‘Rome Pact,’ pledging to increase vaccine distribution to poor nations in order to meet the 40% global vaccination target by the end of the year. But is the new pledge any stronger than those before it?

Amidst its fourth coronavirus wave, Slovenia expanded the recovered-vaccinated-tested rule, requiring that unvaccinated citizens and those who have not yet caught the virus must undergo weekly testing. This covers a variety of sectors, including healthcare, public administration, education and retail.

In an event widely deemed a human rights violation, Maria Kolesnikova, one of the leaders in the mass opposition movement against the Belarusian president, was sentenced on Monday to 11 years in prison. Western countries have denounced the ruling, calling it a “politically motivated conviction and shameful sentencing.