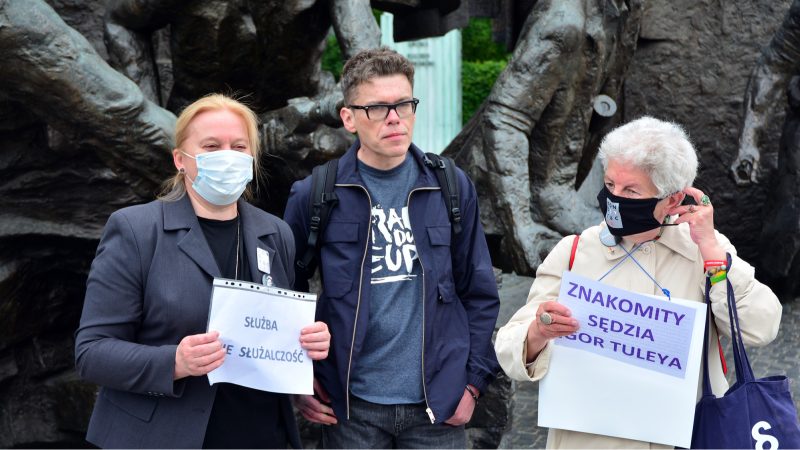 Protest of supporters of Judge Igor Tuleya at the entrance to the Supreme Court. Warsaw, Poland. 9 June 2020. [Shutterstock/Grand Warszawski]

A Polish judge critical of the ruling nationalists’ judiciary reforms had his immunity from prosecution removed on Wednesday (19 November) by a disciplinary chamber the EU says is not independent, underlining a rift over the rule of law that has left the country at odds with the bloc.

The ruling, concerning Igor Tuleya, a Warsaw district court judge, came as a long-running conflict over judicial independence resulted in Poland and Hungary blocking the EU’s 2021-2027 budget and recovery fund over a clause making access to money conditional on respecting the rule of law.

Earlier this year, the European Court of Justice ruled that Poland’s government should suspend the Supreme Court’s disciplinary chamber as it was not sufficiently independent.

He added that he fears the current political situation with the EU could lead to “Polexit”, meaning Poland could leave the 27-member bloc.

While not the first judge critical of the government to lose his immunity, Tuleya is the first to lose it as a result of his actions in the courtroom, according to Polish judges association Iustitia.

Tuleya said that, despite the fact that he is no longer allowed to work as a judge, could face charges and even be detained, he plans to show up for work on Thursday morning at his chambers.

He is facing disciplinary proceedings after he allowed media access to a sensitive court ruling in 2017 regarding a parliamentary vote on the budget criticised for not having opposition politicians present.

The government has justified its far-reaching reforms – including how judges are appointed – by saying they are necessary to improve the efficiency of the courts and to root out the vestiges of the 1945-89 communist era.

The ruling Law and Justice party (PiS) has aimed to prevent judges from ruling that peers nominated by a panel set up under new rules drawn up by parliament are not independent.