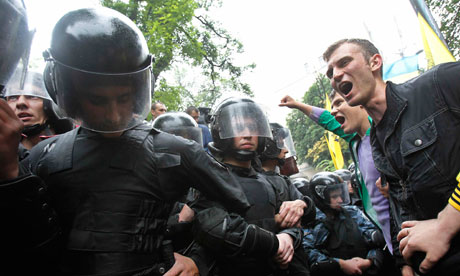 An escalation of the situation in Ukraine could threaten the security of EU member states with sizeable Russian minorities such as the Baltic States, warned the president of the European Economic and Social Committee (EESC), Henri Malosse.

Speaking in Brussels yesterday (3 March), the Euromaidan icon and activist, Ruslana Lyzhychko, addressed the press alongside the EESC president to warn Europeans against the “anti-Ukrainian propaganda organised by the Kremlin” and the security risk for EU member states in the Baltic region.

In an interview with EURACTIV, Lyzhychko said: “Europe must now understand that it is also in danger”, recalling that Russian President Vladimir Putin “declared he is concerned about the Russian-speaking minorities in EU countries too, such as the Baltic States.”

“I’m certain that if the Kremlin decides to carry out its plan in Ukraine, the Baltic States are next and they know it. We met with Baltic diplomats in the OSCE [Organization for Security and Co-operation in Europe] and they confirmed these concerns,” the activist said.

Her statement was backed by the EESC president who said that “peace and security in Europe are in danger” after Moscow intervened in the Russian-speaking region of Crimea, a move which followed the controversial vote of the Ukrainian parliament in abolishing Russian as a state language.

'Crimea is not Kosovo'

Both speakers called the situation with the Russian minority in Ukraine an “artificial conflict” and a “pretext” for invasion by Putin.

However, none of them agree that the Russian-speaking minority in Crimea faces a dangerous threat. Ruslana reminded that Russian-speaking activists in many cities like Kharkiv, Odessa and Donetsk are “demonstrating against Putin’s involvement and for a united Ukraine”.

“People are throwing the case of Kosovo at us, even if that intervention [of the Western allies] can be challenged, it was completely different. There was a civil war, there were massacres by the Serbian army, there are no massacres of Russian-speaking people in Crimea,” the head of the EESC added.

“Russia is using the exact same arguments that the Germans used in 1938 when they invaded Czechoslovakia: protecting German-speaking minorities from a so-called aggression that they had provoked … Europe’s entire security is threatened,” Malosse said calling the Russian intervention an “Anschluss”, the German word used to refer to the Nazi’s annexation of Austria in 1938.

Europe’s 'mismanagement' of the Eastern Partnership

Pro-EU activists in Ukraine deem that the “misinformation” organised by the “Kremlin propaganda” needs to be countered on those subjects by sending expert and monitoring missions on the ground from all relevant international bodies – whether the OSCE, the Council of Europe, or the UN. But also by sending reporters on the ground, Ruslana pleaded.

“We as Ukrainians do not have the resources to fight against the Kremlin propaganda, that’s why we count on EU journalists to tell the truth,” she stated.

But the speakers were critical of the EU as well.

Malosse said he was “extremely critical of the way the European Commission made the Eastern Partnership. We gave pretexts to Putin and which made pro-democratic forces in Russia desperate.”

Although he insisted all of Europe was responsible for the mismanagement of EU-Ukraine relations, he considers that “there is a responsibility of those who launched the Eastern partnership,” calling it a “disaster”.

Malosse criticised the fact the EU did not give a membership perspective to Kyiv, but above all he said he was angry at the way the EU gave Ukrainians the impression they had to choose between the two.

“By giving the impression that by getting closer to the EU, the customs union with Russia was excluded, we gave Russia a pretext which was instrumentalised. We were wrong and clumsy,” he proclaimed.

Malosse and Lyzhychko called on the international community to ensure that the 1994 Budapest Memorandum which led Ukraine to give up its nuclear arsenal in exchange for its territorial integrity is respected.

Ruslana Lyzhychko launched a call to the UK and Germany in particular. For pro-democracy activists, the UK, as a signatory of the Budapest agreement, has to guarantee it is respected by other partners.

“She is a real peacemaker, she is doing everything to stop Russia from using violence, and we hold her in high esteem,” the former singer explained.

Nonetheless, a strong message from the EU as a community would be welcome and sanctions against Russian officials “should be considered”.

Carl Bildt, the foreign affairs minister of Sweden, said: “It is a fundamental principle in European security that one should not violate the borders of other countries. One has no right whatsoever to invade other countries under the pretext of allegedly protecting its own citizens. There have been times in the history of Europe in the past where ruthless regimes have been applying that particular theory and that particular doctrine and that is why it has been a fundamental principle of European peace and security since the Cold War to refute that particular doctrine. We saw the evil consequences of that in the Balkan wars.”

Ukraine mobilised for war on Sunday (2 March) after Russian forces bloodlessly seized Crimea, an isolated Black Sea peninsula where Moscow has a naval base.

As Western countries considered how to respond to the crisis, the United States said it was focused on economic, diplomatic and political measures, and made clear it was not seriously considering military action.

The Group of Seven major industrialised nations, condemning the Russian intrusion into Ukraine, suspended preparations for the G8 summit that includes Russia and had been scheduled to take place in June in Sochi.

Meanwhile, finance ministers from the G7 said they were ready to offer "strong financial backing" to Ukraine, provided the new government in Kiev agreed to pursue economic reforms sought by the International Monetary Fund.