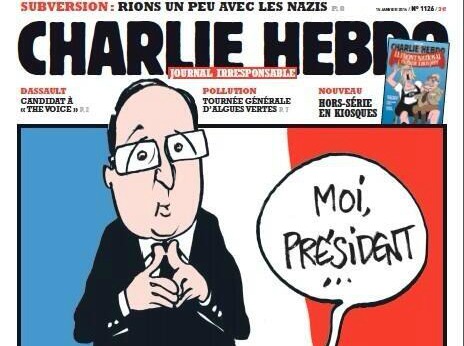 Police are hunting three French nationals, including two brothers from the Paris region, after suspected Islamist gunmen killed 12 people at the Paris offices of the French paper Charlie Hebdo. EU leaders shocked by the shooting described it as an intolerable act of barbarism. EURACTIV France reports.

Three gunmen armed with Kalashnikov rifles and rocket launchers attacked and killed two police officers who were surveying the building in the 11th arrondissement of Paris, before bursting into the paper’s weekly editorial meeting and shooting people at point-blank range.

They then left the scene shouting the name of Allah. The attack lasted ten minutes and the terrorists made their getaway in a stolen car.

The artists Charb, who was also the director of publication, Wolinski, Cabu and Tignous are among the dead. The economist Bernard Maris, a member of the General Council of the Bank of France, is also among the victims. Reports say that the terrorists did not shoot at the women who were present in the meeting, including Luce Lapin, specialist in animal protection and vegetarianism.

The satirical paper has received numerous threats from Islamic extremists since it published a caricature of the Prophet Mohammed in 2006. In response to these threats, one of the victims, the journalist and artist Charb, published a section called “fatwa of the week”. The publication employs 30 regular journalists and freelancers and around twenty artists.

In November 2011, the offices of the weekly paper were destroyed in an arson attack. In 2013, a 24 year-old man was imprisoned for calling for the decapitation of the director of Charlie Hebdo following the publication of caricatures of Mohammed.

French politicians have called for national unity after what François Hollande described as “an act of exceptional barbarism”.

The French Prime Minister Manuel Valls immediately activated the highest-level security alert, Vigipirate. Schools will be protected as a priority, and their exits blocked. Investigators launched an appeal for witnesses on Wednesday afternoon after the attacks which left 12 dead in the offices of Charlie Hebdo, but the brigade in charge of the operation lost the trail of the terrorists.

Crisis meeting in the President’s office

The ministers Bernard Cazeneuve (Interior), Jean-Yves Le Drian (Defence), Christiane Taubira (Justice), Laurent Fabius (Foreign Affairs) and Fleur Pellerin (Culture and Communication), as well as the heads of the main police and gendarmerie services was called into a crisis meeting by the President.

Security was greatly increased around the presidential palace, where extra police officers have been deployed with bullet-proof vests and automatic weapons.

The National Union of Journalists has called for a rally on Wednesday evening at Place de la République, close to the site of the attack.

In Brussels, the President of the European Parliament, Martin Schulz, invited all MEPs to observe a minute of silence at 10:45 local time at the Agora Simone Veil.

"This heinous act is an attack against our values of freedom of expression and freedom of the press, against tolerance and mutual respect. I condemn it strongly,” Schulz said. “On behalf of the European Parliament, I express my condolences to the families and friends of the victims,” he added.

Jean-Claude Juncker, the President of the European Commission, said in a statement that he was "profoundly shocked by the brutal and inhuman attack which hit the offices of Charlie Hebdo. This is an intolerable act of barbarism which affects us all as human beings. My thoughts are with the victims and their families. I express, personally and in the name of the European Commission, my greatest solidarity with France".

Angela Merkel, the German Chancellor, has also published a statement, saying "this horrible act is not only an act of aggression against the lives of the French citizens, but also an unjustifiable attack on the freedom of the press and opinion, a foundation of our free and democratic culture".

"No act of barbarism will ever extinguish the freedom of the press. We are a united country and we will rally together," the French President François Hollande said.

"The murders in Paris are sickening. We stand with the French people in the fight against terror and defending the freedom of the press," the British Prime Minister David Cameron wrote.

"I am shocked by the appalling attack that took place this morning in Paris against Charlie Hebdo. The European Union stands side by side with France after this atrocious act. It is a brutal attack against our fundamental values, against freedom of expression which is a pillar of our democracy," the President of the European Council Donald Tusk said. He added "In the name of the European Union I offer my deepest condolences to the families and friends of the victims and I express my solidarity with the French authorities and the French people".

"I am profoundly shocked by the news of the attack in Paris.  I send our condolences to the families of the victims and to the French people," the Romanian Prime Minister Victor Ponta wrote.

The Finnish Prime Minister Alexander Stubb tweeted "we strongly condemn the horrible shooting at #CharlieHebdo. We must all stand up for freedom of speech and expression".

The head of the Spanish government, Mariano Rajoy, said "my firm condemnation of the terrorist attack in Paris. My condolences and solidarity to the French people and the victims."

"I’m deeply shocked by the deadly attack on the Charlie Hebdo. My thoughts are with its team, police and their families," said Martin Schulz, the President of the European Parliament.

"Today we have seen what a religion can become when it seeks to impose its obsession and fanaticism by terror. Today we have one task, to come together in national unity, to refuse to back down, to pursue the terrorists and to punish them. It is in these times of war that we see the extent of a people's determination to protect their values," said François Bayrou from the Democratic Movement.