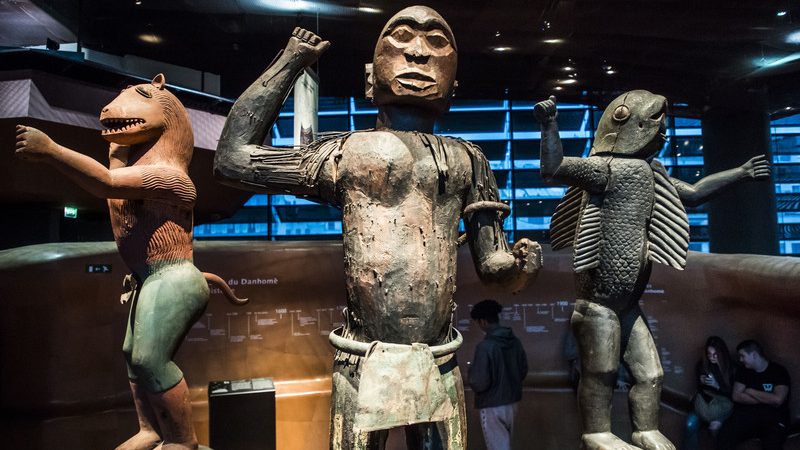 As some European countries start returning looted art to former colonies, experts call for EU guidelines to “harmonise” and support the restitution of cultural objects to African museums.

The push for the return of art objects stolen during colonialism has become more widespread in recent years due to the renewed attention on Europe’s colonial past.

The Black Lives Matter protests in 2020 helped to “fuel the debate,” but discussions on art repatriation were ongoing even before, according to Larissa Förster, head of the department for cultural goods from colonial contexts at the German Lost Art Foundation.

France started talks on art restitution in 2017 after Macron promised to return artefacts to Benin in a speech in Ouagadougou, the capital of Burkina Faso. Some 26 of these objects looted during a siege in the 19th century were sent back to the small African country last autumn.

However, a 2018 report commissioned by the French government found that up to 90,000 African artworks are stored in the country’s museums, while around 90% of African cultural heritage remains outside the continent.

A handful of other EU countries are increasingly active on the issue, like Germany, which is preparing to return some Beninese sculptures later this year.

Last July, the Belgian government said it would start repatriating objects acquired through illegitimate means. An expert commission will conduct provenance research sifting through around 85,000 objects stored at the Africa Museum in Brussels.

The museum’s director Guido Gryseels estimates that around 1,000 to 2,000 of these objects were acquired through violence or plundering but added that it is not always possible to trace back their origin, especially in the case of donations.

Moreover, he said that the discussion on provenance is complex as most objects were acquired “in a situation of unequal exchange.”

Not all are keen to engage

Other member states, however, are not engaging on the issue. In 2020, for instance, the Portuguese National Assembly voted against a bill that sought to return works of art to former colonies.

“The main obstacle [to art restitution] is the lack of political will to do so, to engage with Europe’s colonial legacy,” said Jürgen Zimmerer, professor at the University of Hamburg.

Currently, the restitution of cultural objects falls under the member states’ competence and is a matter which the EU does not interfere with, a European Commission spokesperson told EURACTIV.

However, experts and MEPs are increasingly calling on the Commission to implement a European framework on art repatriation.

“We need a truly transnational framework because just as colonialism was a European project, so was European art theft,” Zimmerer said.

According to MEP Salima Yenbou, art repatriation should be a European issue “to calm down, to avoid hysteria, to take the necessary distance, which is often impossible in the member states most concerned.”

Yenbou is the rapporteur of a report calling for European guidelines on looted art restitution, which should be voted on in the plenary next March.

In her view, EU guidelines could help fill the gap that persists in European and national laws and could play a crucial role in reconciliation.

“Giving back works of art is not only about giving back to a country their own material property,” she said.

“It’s about giving them back their own cultural identity. It’s about drawing back the culture that our predecessors shamefully tried to erase.”

During colonialism, artworks looted by European colonial powers were often exchanged and ended up in different countries.

“A lot of African countries are not aware where their cultural heritage is. They know it’s somewhere in the Western museums, but they don’t know which one,” Gryseels said.

In his view, EU guidelines could ensure better transparency of European collections while encouraging less active nations to step up their restitution policies.

Some countries’ reluctance to give back stolen art is also due to concerns about the capacity of African museums to store and protect the items adequately.

“African institutions may lack capacity and resources to preserve, research, and display [objects] adequately,” reads a 2020 survey conducted by the African Foundation for Development.

However, Zimmerer said this is “an old apologetic argument.”

In his view, the danger of loss through war and civil strife in African countries is not dissimilar to what happened in Europe during the World Wars, when thousands of objects were destroyed.

Meanwhile, some European cultural institutions, like the Africa Museum in Brussels, are implementing programmes to reinforce the capacity of African museums.

According to Gryseels, the EU could also support these capacity-strengthening initiatives through financing.

Moreover, Förster said countries in the Global South would benefit from a common European framework instead of negotiating the return of objects with single nations or museums.

“In the long run, what we need is to harmonise these models and for European countries to come to the table and work on something that can be super national,” she said.

However, according to Zimmerer, art restitution should proceed even further towards a global approach.

“With the UK no longer part of the EU and museums outside Europe, like in the US, holding colonial art, the European framework is too small,” he said.

“But it could lead the way by example,” he added.