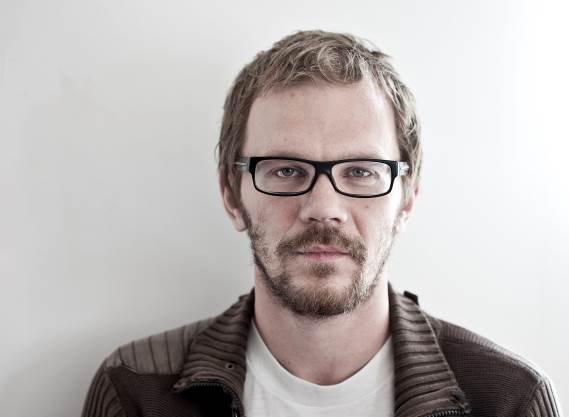 Embedded in an English-language excerpt from Jelgava ’94, a Latvian novel about teenage metal fans in the Baltic state, in the years immediately following independence from the USSR, its soft-spoken author read the relevant passage from the work, in his native language, like he was still a teenage music fan.

The elegantly dressed, distinctly non-metal audience drank Janis Jonevs up, as though he were a refreshing drink in an otherwise dry literary space. One of this year’s thirteen award winners, Jonevs’ novel could not stand out more.

Equal parts bildungsroman, and a portrait of the cultural chaos that reigned in former communist states during the 1990s, the book serves as a stark reminder of what has been left behind over the last year, as Cold War style tensions resumed between Moscow and the West, and border countries such as Latvia, grew increasingly concerned about their independence.

The freedom to transgress, to misbehave, to be heavy metal kids, may have been a hard-won freedom, despite the fact that anti-establishment subcultures, as in the West, often flourished behind the Iron Curtain. Still, the release that Jonevs recounts is indelibly linked to its historic context, one which, in retrospect, is not just a middle aged exercise in in remembering one’s carefree youth.

The book is also, despite its intense specificity, about being part of a larger world, linked by underground music, and its influence on young persons lives. Featuring a protagonist with the nickname Death, namedropping American indie bands like Anglo kids, the characters in the book are harbingers of the global youth culture that fully emerged with the mainstreaming of the Internet in the early ’00s. There’s nothing about them, at least culturally, that couldn’t mark them as British, German, or Americans. Except, perhaps, how metal fits into their local lives, and structures their relations.

In literary awards ceremonies like this year’s EUPL event, it’s oftentimes hard to connect with authors so immediately, particularly when there are so many to choose from. At least in this reporter’s case. A former music journalist and punk ‘zine editor, in the 1990s, Janis Jonevs’ work was an especially easy sell. Though the rest of the award recipients produced equally topical, deserving works, Jelgava ’94 spoke to me, most personally.

Though not a patron of underground culture like I used to be, I remain as interested in it as I was in my twenties. I just have less time to seek it out, as the old mediums for discovering it – record stores, fanzines – have largely disappeared, in favor of the largely anonymous online space, where there is little distinction between alternative and mainstream, independent and major label. Just try searching for a record in the iTunes store, and you’ll see. It takes more work, ironically, to find things to connect to.

Hence, my surprise, to discover the literary equivalent of a great metal record of its day, in the form of a novel, at a European Union sponsored literary awards ceremony, in Brussels. It may be stereotypically ‘adult’ to discover it that way, but the context, in terms of encountering it within a specific community setting, was not.  That the funding for the awards comes from governments, of course, is a far cry from the DIY ethos of the underground. But money is money. What matters is the culture we sponsor with it. There’s always something worthy.

Reading through the selection of translations of this year’s European Union Prize for Literature winners, I’m sure that other attendees of the Wednesday ceremony had the same sort of experience, albeit with different authors. I’m equally certain that if I set myself to it, I might find similar, albeit less intense connections, as well. Practically everything I’ve read (that I could translate) seems worthwhile, on one level or another. When full English translations become available, I’ll gladly buy them all.

While I’ve already praised the choices made by the national committees [See: Books That Bind Europe Together] as a political gesture, it wasn’t until attending the awards event that it became clear to me what a profound cultural happening this was. For anyone who knows what a sorry state the book business is in, and how difficult it is to match deserving literary talent with publishers, the recognition granted to the thirteen award winners, is the sort of gesture that compensates for it.

Never mind that all of this year’s prize winners have publishing deals. Every writer knows that books are quickly lost in the ether, as audiences move on from one title to the next. The European Union Prize for Literature is the sort of initiative that helps authors to avoid invisibility, by supporting writers on the basis of merit, not just marketability. Thus, my delight at discovering the name of an obscure American underground metal band, a stone’s throw away from the European Parliament.