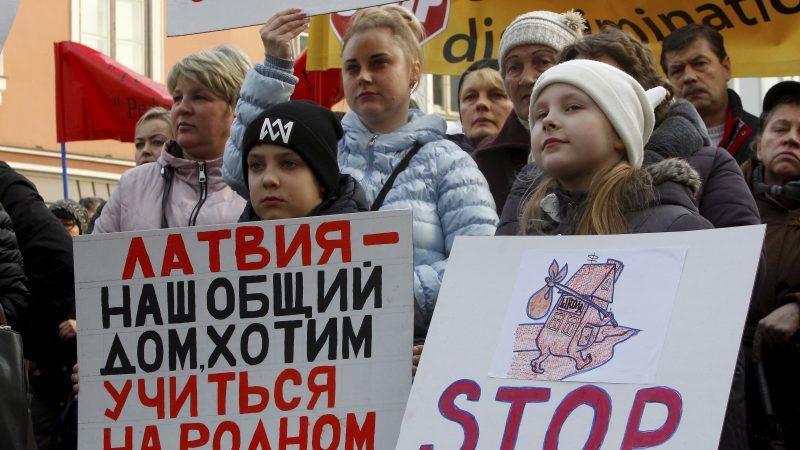 Participiants take part in a protest rally against a language reform, under the slogan, Latvia is Our common home, we want to learn in native language, in Riga, Latvia, 4 April 2018. [Toms Kalnins/EPA/EFE]

Riga’s plans to impose Latvian as the main teaching language in minority schools has created tension among some of its ethnic Russian population, resurrecting a long-running dispute with Latvia’s former Soviet masters.

In the Baltic nation where around a quarter of the population are ethnic Russians, only about 40% of classes in minority schools are taught in Latvian.

In March, however, parliament voted through legislation which will raise that to 80%, meaning from September 2019, all core subjects will be taught in Latvian.

Latvia says the aim is to improve end-of-high-school exam results — which are crucial for obtaining state-sponsored college tuition. Such exams are only in Latvian, a Baltic language with little similarity to Russian, which is Slavic.

But the move has been denounced as “discriminatory” by some of Latvia’s Russian minority who have staged months of protests — with Russia’s OSCE envoy and even President Vladimir Putin weighing in, citing “human rights” violations.

Although such a reform has been on the table for years, it only began to gain traction in 2014 after national ombudsman Juris Jansons said having separate schools looked “like ethnic segregation”.

While students from minority schools do figure among the top scorers, all but one of the worst-performing schools are Russian or bilingual, education ministry figures show.

“Every child should have an equal opportunity to get the same education,” centrist lawmaker and reform advocate Raivis Dzintars told AFP.

Within Latvia, ethnic Russians constitute by far the largest minority, accounting for 24% of the population of 1.9 million people. Latvians make up 62%, while the rest mainly include individuals of Belarussian, Polish or Ukrainian descent.

During the Soviet occupation which began during World War II, tens of thousands of Latvians were deported and equal numbers of ethnic Russians were shipped into the Baltic state by Moscow, altering the ethno-linguistic profile of the country.

At that time, there was a Russification policy in place which saw the establishment of a separate Russian-language school system, with 94 Russian-only and 57 bilingual schools still in existence.

The move to shift the language balance has infuriated Russian officials with OSCE envoy Alexander Lukashevich denouncing it as a “discriminatory policy with the goal of forced assimilation of the Russian-speaking population.”

And Putin said earlier this month he had raised the matter with the European Union.

“I hope they are ashamed because they pay special attention to human rights violations outside the European Union, but they themselves violate human rights within the EU,” he remarked.

A Russian newspaper said prominent lawyer Ilya Shablinsky had plans to visit Latvia this month to “inspect the conflict over minority school reforms” — drawing a blunt response from Riga.

“Russian officials can make inspections in their own country but such activity will not be tolerated in Latvia,” Foreign Minister Edgars Rinkevics told the LETA news agency.

Shablinsky later told AFP he had been “banned from entering Latvia for six months”.

There have also been monthly protests over the change, mostly called by pro-Kremlin politicians from Latvia’s Russian Union party who are keen to use the issue as much as possible ahead of a general election in October.

“I have two sons and grandchildren, and I want them to get a Russian education, not a Latvian one,” 54-year old Valery Andreyev told AFP at one rally in Riga where protesters waved signs reading: “Russians do not surrender.”

But the numbers have not been huge.

So far, the demonstrators have numbered in the hundreds — far fewer than the huge crowds who turned out to protest in 2004 when Latvia passed another reform seeking to curb Russian in education as it formally joined the EU.

Back then, such protests drew up to 15,000 demonstrators, among them school children, teachers and parents.

Despite the outcry, most ethnic Russians, including parent and teacher organisations, have not publicly opposed the reform.

Over the years, an increasing number of Russian-speaking families have sent their children to Latvian schools and today’s generation uses the official language more and more.

In one village near the Russian border, the parents even voted in 2011 to make their bilingual school Latvian-only.

And a year later, voters overwhelmingly rejected a plan to make Russian the second official language in Latvia in a referendum highlighting ethnic divisions in the former-Soviet republic.

None of the other — considerably smaller — minorities have expressed concern over the new legislation, which is actively supported by Jewish groups and the Congress of Ukrainians in Latvia.

“When I visit Israel, I see the following problem: with Arabic granted status as the second official language in Israel, many Palestinian kids become disadvantaged when they are not required to be fluent in Hebrew and later have problems attending college,” he said.