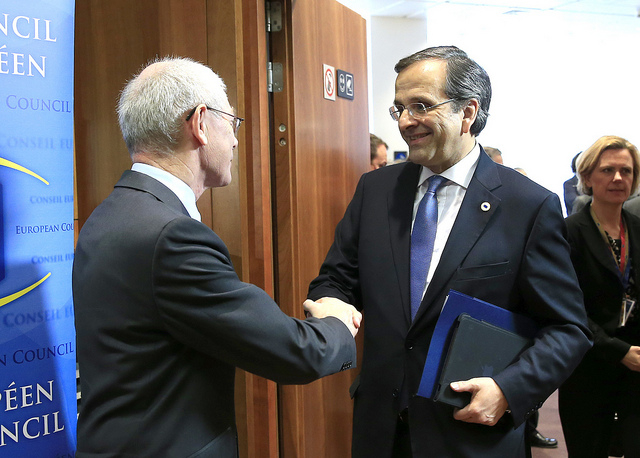 During his last appearance in the European Parliament in his capacity as EU President, Greek Prime Minister Antonis Samaras said he did not know about the existence of a Macedonian language, and that this tongue was created by the communists in Tito’s Yugoslavia.

Samaras, who debriefed MEPs on the six-month Greek presidency that ended on 30 June, was asked yesterday (2 July) by a journalist of Macedonia’s MIA agency, about their country’s blocked EU accession process. Then he got entangled in a dispute with the journalist over the language issue.

“I am unaware of the existence of the Macedonian language. The EU accession process is carried out according to merit. The European Council decided not to start the accession talks with countries that do not meet the criteria, since this puts into question the credibility of the enlargement process” Samaras said, as quoted by the press in Skopje.

In response, speaking in French, Samaras said that the Macedonian language was invented by the communists.

The exchange appears to illustrate the difficult relation between Athens and Skopje, at a time when the small Balkan nation wants to move on along its EU integration path. Greece doesn’t recognise the name of Macedonia, which is identical to its southernmost province (see background). But now Samaras signalled that Athens had also problems with the country’s language.

Macedonia was a republic of the former Yugoslavia until 1991, when it declared independence. Yugoslavia was a communist country created in the aftermath of World War II, led by Josip Broz Tito until his death in 1980. During Tito’s Yugoslavia, only three languages officially existed: Serbo-Croat, Macedonian and Slovene. Following the collapse of Yugoslavia, also appeared the Croat, Bosnian and Montenegrin languages.

Standard Macedonian was implemented as the official language of the Socialist Republic of Macedonia, part of the Yugoslav federation, in 1945. Most of its codification was formalised in this period.

The Macedonian language is a matter of political controversy in Greece and also in Bulgaria. Bulgaria was the first country to recognise independent Macedonia, but has difficulty recognising the Macedonian language. When signing bilateral documents, the formula is that those are signed in the “official languages of the two countries”.

Asked today to comment the statements by Samaras, Peter Stano, spokesperson to Enlargement Commissioner Štefan Füle, said he had nothing to say.

As not all EU countries recognise Macedonia with its constitutional name, the Commission calls it “Former Yugoslav Republic of Macedonia”. The Commission has sometimes used the adjective “Macedonian” in its official documents.

Of all the hurdles standing in the way of Macedonia's EU accession, the so-called 'name dispute' with Greece appears to be the biggest. Seen from Athens, the official name used by Skopje – Republic of Macedonia – is an open challenge to the Greek region of Macedonia. In reprisal, Greece pledged to veto Macedonia's participation in international organisations, including the EU, until the issue is resolved.