Pope Francis talks to reporters during a press conference he held on an aircraft taking him back from Sibiu, Romania, to Rome, 2 June 2019. [Pool/EPA/EFE]

His comments to journalists on the plane while returning from a three-day trip to Romania, one of the more recent European Union members, were his first since European elections last month.

Francis, who was asked about the elections, Italian far-right leader Matteo Salvini and other European topics, urged believers to pray for European unity and non-believers to hope for it “from the bottom of your hearts”.

Earlier on Sunday Pope Francis asked forgiveness in the name of the Catholic Church for the mistreatment of the Roma people, a move likely to increase tensions with Italy’s anti-immigrant Interior Minister Matteo Salvini.

Francis made the comment during a meeting with Roma people at the last event of his three day trip to Romania, saying his heart was made “heavy” by the meeting.

#PopeFrancis ends his pilgrimage to Romania by asking forgiveness, in the name of the Church, for the injustice perpetrated against the Roma people. #PopeInRomania https://t.co/bQ5FGLfYzA

“It is weighed down by the many experiences of discrimination, segregation and mistreatment experienced by your communities. History tells us that Christians too, including Catholics, are not strangers to such evil,” he said.

With an estimated population of 10-12 million, approximately six million of whom live in the European Union, Roma people are the biggest ethnic minority in Europe and rights groups say they are often the victims of prejudice and social exclusion.

Salvini, who has clashed with the pope repeatedly on migration issues, reacted angrily last month when Francis received a group of Roma at the Vatican last month.

Salvini, head of the far-right Lega party and a deputy prime minister, responded by repeating his promise to close all Roma camps in Italy.

“I would like to ask your forgiveness for this,” the pope told the Roma. “I ask forgiveness – in the name of the Church and of the Lord – and I ask forgiveness of you. For all those times in history when we have discriminated, mistreated or looked askance at you …”.

Earlier on Sunday, the pope said a Mass for some 100,000 people during which he beatified seven Communist-era bishops of the Eastern Rite Catholic Church who died in prison or as a result of their harsh treatment during Romania’s communist era. 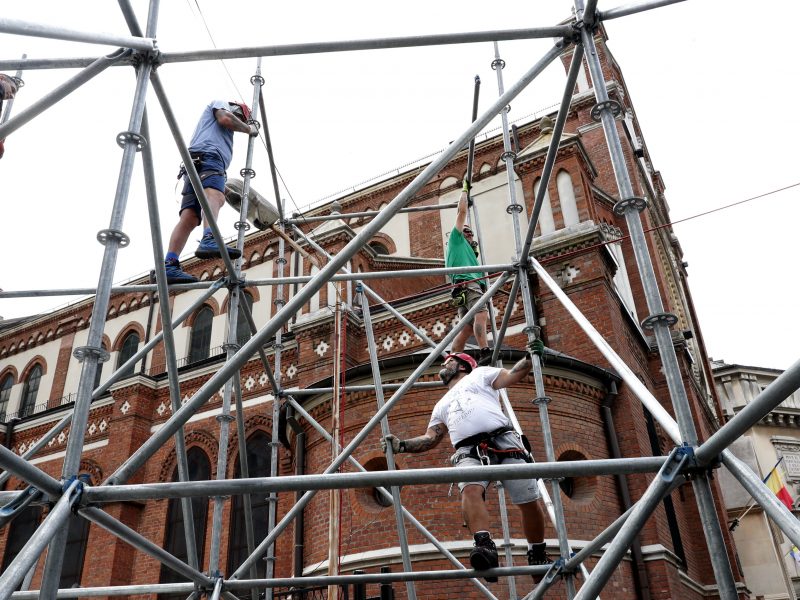 Romanians prepare for Pope's visit at times of domestic upheaval

“(The bishops) endured suffering and gave their lives to oppose an illiberal ideological system that oppressed the fundamental rights of the human person,” Francis said.

After World War Two, Romania’s Communist authorities confiscated properties of the Eastern Rite Catholic Church and ordered its members to join the majority Orthodox Church, which was easier for the party to control.

Historians say about half a million Romanians including politicians, priests, doctors, officers, land owners and merchants were sentenced and jailed in the 1950s and early 1960s and a fifth of them perished in prisons and labour camps.

Many Catholic properties taken by the Communist dictatorship or given by the government to the Orthodox have yet to be returned 30 years after the fall of dictator Nicolae Ceausescu.

2 responses to “Pope pleads for European unity, warns against fear-mongers”