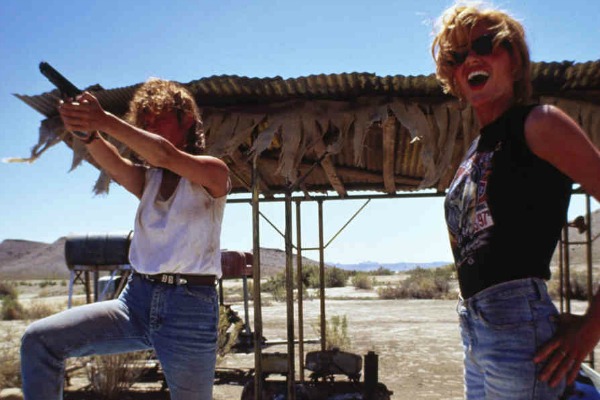 Some Swedish cinemas have launched a new movie rating to highlight gender bias and how women are portrayed, or not portrayed, in films.

Sweden, a country which has long been known for its progressive legislation on gender equality, is now broadening the debate beyond the political and social spheres, into the cultural sector, with the launch of a feminist movie rating in cinemas.

Normally, movie ratings reveal whether a film contains nudity, profanity, sex or violence, but now movies have to pass the so-called Bechdel test to get an 'A' rating for feminism.

The Bechdel test only has three rules:

The rating system was launched last month in Sweden, on a voluntary basis, to help spread awareness among moviegoers about how women are portrayed in films.

Ellen Tejle, director of Bio Rio in Stockholm, one of the cinemas using the rating, told Associated Press that most visitors had reacted positively to the initiative and for others it had been an "eye-opener".

"The entire 'Lord of the Rings' trilogy, all 'Star Wars' movies, 'The Social Network,' 'Pulp Fiction' and all but one of the 'Harry Potter' movies fail this test," Tejle said.

Tejle added that beliefs about women's roles in society are influenced by the fact that movie watchers rarely see "a female superhero or a female professor or person who makes it through exciting challenges and masters them."

Katrina Schelin who’s the director of a cinema in Herlev, Denmark, told the newspaper Politiken that she would “definitely” introduce the rating system in her cinema.

“It highlights a problem which only a few people are aware of: that only a few movies show the world from a female perspective,” Schelin said.

“It’s a rating after a test that says: Here women are not only items. We believe it’s a good initiative to spark a debate. It’ll give attention to stereotypes in movies. Movies reflect our reality and the test will make it easier to start a conversation,” she added.

From Hollywood to Europe

The initiative is supported by the state-funded Swedish Film and the Scandinavian cable TV channel Viasat Film, which next Sunday (17 November) will use the ratings in its film reviews and has scheduled a "Super Sunday" of only 'A'-rated films, such as 'The Hunger Games', ''The Iron Lady' and 'Savages'.

Research in the United States has shown that women are under-represented on the screen and that little has changed in the past 60 years.

In the top 100 films in the US in 2011, women accounted for 33% of all characters and only 11% of the protagonists, according to a study by the Center for the Study of Women in Television and Film.

Asked by Associated Press about the idea of a new movie rating, Hollywood actress Jada Pinkett Smith was excited.

"A feminist ratings system? That's so interesting! I say, hey, let's see if it works!" the actress said.

But Swedish film critic Hynek Pallas criticised the Bechdel test, saying that too many films that would not make society better or more equal would pass, whereas many films that that deal with feminist themes and highlight inequality would not.

Tejle said the Bechdel test did not say anything about the quality of a film, but the goal was to see more female stories and perspectives on cinema screens.

EURACTIV sought a comment from Justice Commissioner Viviane Reding about whether she would like to see a feminist movie rating system at a European level, but the Commissioner avoided addressing the Swedish system by referring to old statements on the media's role in promoting equality.

Feminism is a collection of movements and ideologies aimed at defining, establishing, and defending equal political, economic, and social rights for women.

This includes seeking to establish equal opportunities for women in education and employment. A feminist advocates or supports the rights and equality of women.

The women’s rights and gender equality committee and the legal affairs committee approved the proposal for a directive, presented by Justice and Fundamental Rights Commissioner Viviane Reding in November 2012.

The proposal requires publicly listed European companies to make sure that by 2020 at least 40% of their non-executive board members are female.