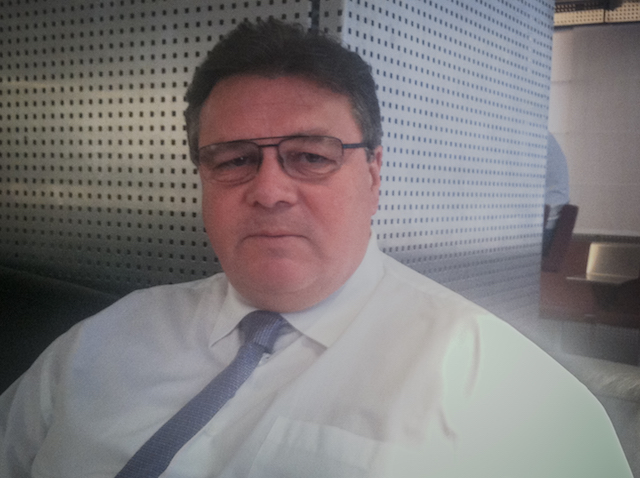 Linas Linkevi?ius is a member of Lithuania’s Social Democratic Party. He was the Lithuanian Permanent Representative to NATO from 2005 until 2011. In December 2012, he was appointed Minister of Foreign affairs.

We are speaking during the lunch break of the Foreign Affairs Council, in which migration, Syria and Libya and the Eastern partners on the agenda. But more importantly, there is a tense atmosphere, there is fear even in the streets surrounding the Council building, following the attacks in Paris on Friday night. Did you discuss those issues with your colleagues?

We are expressing condolences to the families. It seems we are talking a lot about coordination, about exchanging information, about the passenger number records, but we are doing that slowly. Maybe this time we will speed up things. Maybe this will be a wake-up call.

We need to coordinate efforts. That’s the main point. Politically everyone agrees, and what we can add as foreign ministers in this discussion is not much. But special services, internal ministries, they need to exchange data, exchange information. We cannot fail here.

What was organised against us, against our values, is a challenge, a test. Solidarity is gaining a new meaning. It’s a word which sounds good, but there are many practical aspects to it. We really should stay united, not allow ourselves to split, and show that we are not afraid.

And you are right – the situation is not quite stable. People need assurance that we are ready to do very concrete things in order to withstand this threat.

Article 222 of the Lisbon Treaty, the so-called Solidarity Clause, looks a little bit like Article 5 of the NATO treaty. Did you discuss it?

We know that Article 5 has been invoked once, right?

Exactly, and it’s up to the country affected to look for solidarity, but also for means of collective action. In this case, it’s up to France. If France invokes the clause, Lithuania is ready to provide whatever assistance is ready with our ally. I’m convinced the reaction would be immediate and positive, from whichever organisation, NATO or the EU. But again, it’s up to France to discuss what kind of assistance is needed in this regard.

Do you think there is a rapprochement with Russia, since Moscow began its military operations in Syria? Do you think that there is a risk that the West’s attention is shifting away from Ukraine, and Russia will gain the upper hand there?

With regard to Russia, we have to state that Russia is not a partner. In Ukraine, or in Syria, Russia has different goals [than us], so it’s very difficult to call the relation a partnership. Often Russia’s action deteriorates the situation or prolongs the conflict, like in Syria for instance. And also in Ukraine. Cynically speaking, after the Paris events, the military activity of the Russia-supported separatists [in Ukraine] increased.

This was not the case a couple of weeks ago, when there was some compliance with the truce. Now soldiers are killed every day. So how can we call this a rapprochement? Rapprochement should not be in the statements. There should be signs on the ground. So far, I don’t see any sign of that.

Does Lithuania feel sidelined, since the diplomatic activity to deal with the Ukraine crisis was taken over by the Normandy format, where only France and Germany represent the EU?

We are not against any format, Minsk or Normandy, as long as those bring results. We are putting pressure on the Ukrainian government, which is definitely needed, but they know what they have to do. There should be more pressure on Russia in this regard. The overall climate depends on the access, on observation of the border between the Russian Federation and Ukraine, on the withdrawal of troops and military equipment from Ukrainian territory.

These are conditions for Ukraine to make important decision. In my view, to talk about Minsk implementation abstractly is one thing, but to talk concretely, and see who is behind and who is responsible – clearly more pressure should be put on Russia.

And I’m not talking about formats. Normandy, Minsk, or whatever. We wish success to every effort. But let’s not lose sight of the whole picture, which doesn’t look adequate at the moment.

Is the Nord Stream 2 project, to double the existing capacity of a pipeline from Russia to Germany across the Baltic Sea, a matter of concern for your country?

It’s also an interesting question, because this project has no economic background. Nothing. It’s just politics, to skip Ukraine, which is really not very nice, to put it mildly. And it’s really very sad that this project is taking place, and that European companies are taking part in it. Europe doesn’t need Nord Stream 2.

How do you tell your colleagues this?

In the same way I’m telling you. We are discussing this issue.

Yes, and it’s really not the best example of European unity, of streamlining the Energy Union. It’s something that has to do with national interest. But this time, I’m afraid, at the expense of European interests, and of the vital interests of our partners, Ukraine in this case. Because the project is very detrimental for Ukraine.