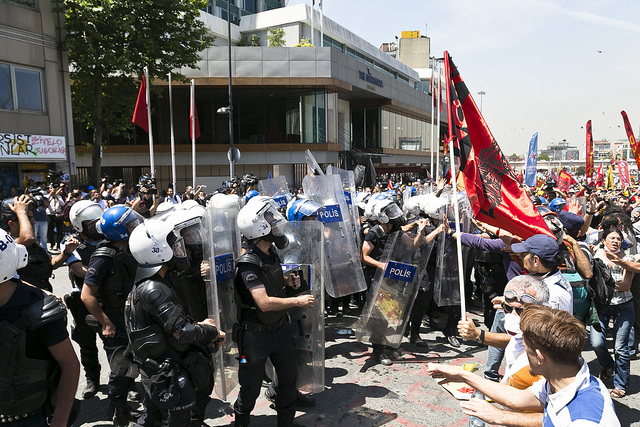 Protests in Istanbul. The EU wants to bolster its energy partnerships with countries, such as Turkey, that have poor human rights records as part of its Energy Union plans. [Eser Karada?/Flickr]

EXCLUSIVE: The European Union’s flagship energy project will prop up a rogue’s gallery of authoritarian governments responsible for a string of human rights abuses, while not improving gas supply security, civil society organisations have warned.

Turkey, Algeria, Turkmenistan, Azerbaijan and “other potential suppliers in the Middle East and Africa” were named in yesterday’s (25 February) Commission communication on Energy Union. EURACTIV understands that Iran and Iraq is also part of the Commission’s long-term thinking, as it searches for alternative suppliers of gas to Russia.

The security situation in many of the countries, due to terrorist groups like ISIS and war in states such as Iraq and Libya, was so unreliable that it made a mockery of the idea they could deliver stable supplies, campaigners said.

Speaking exclusively to EURACTIV, Maroš Šef?ovi?, the Commission Vice-President for Energy Union, denied new supply contracts would entrench dictatorships. He argued that a gradual approach to negotiations would yield progress on human rights.

“By cooperating with such countries and not simultaneously and publicly condemning their human rights’ violations, the EU is essentially giving the green light for abuses to continue,” Iverna McGowan, of Amnesty International, said.

Plans for the Energy Union, the EU’s response to its dependence on energy imports, especially Russian gas, were launched yesterday (25 February) in Brussels. The paper highlighted the need to increase the number of energy suppliers, to prevent shortages such as those caused in the EU by Russia turning off the taps in 2009.

“The EU will use all its foreign policy instruments to establish strategic energy partnerships with increasingly important producing and transit countries or regions,” the Energy Union paper read.

The Ukraine Crisis brutally exposed the EU’s vulnerability to Russia, described by policymakers as “an unreliable supplier”, using energy as a political weapon. About 30% of Russian gas imports to the bloc goes through Ukraine.

Russia’s cancellation of the South Stream pipeline, meant to supply the EU with 63bn cubic metre of gas, has given more impetus to the search for more suppliers.

The proposed Southern Gas Corridor, passing through the Caspian region, including Azerbaijan and Turkmenistan, is expected to be finished by 2020, Šef?ovic said.

“This [wider] diversification is of very  strategic importance because it will give Europe the chance to choose, the chance to select reliable suppliers, and the chance to negotiate better prices,” he added.

“While we share the view that reducing reliance on Russian gas is essential, we fail to see how shifting reliance from Russia to this motley crew, and in ‘a longer term perspective’ to Iraq and Iran, will deliver stable supplies,” Geert deKock, of Food and Water Europe, said.

It was premature to predict Iraq, still in the throes of civil war, and Iran, under scrutiny for its nuclear program, could be reliable energy suppliers, even in the long term, the EU affairs director for the NGO added.

“The reliability of trading partners is more important than the simple number of import routes. Replacing dependence on Russia with dependence on other authoritarian regimes with questionable human rights records does not make Europe more secure,” said Luca Bergamaschi, of leading environmental think tank E3G.

A more assertive Russian policy in the Caspian has also sparked fears of a new geopolitical clash over the region’s gas resources, Bergamaschi added.

Amnesty International yesterday published its annual report on human rights. It names and shames some of the countries the EU is looking to do business with.

McGowan, acting director of Amnesty International’s European Institutions Office, said the EU repeatedly said that human rights must be the compass for all its foreign policy.

“What we’re seeing however in practice is the EU veering off course, with the latest policy area to fall victim being that of energy,” she said.

The EU needed to make clear visible demands on countries to clean up their acts, to ensure change abroad when seeking Energy Union partnerships, McGowan said.

Energy Union Vice-President Šef?ovi? told EURACTIV his department worked closely with the European External Action Service (EEAS), which was “looking at the relationship with countries in its full complexity”.

“We are looking at the best way to engage with these countries and how we can work with them on these very sensitive issues. All this needs a gradual approach and to have partnership-like discussions,” he added.

Asked whether handing energy contracts to authoritarian governments would entrench them, Šef?ovi? said he really didn’t think so. Energy cooperation was one part of the relationship with the concerned countries.

“We have also other parts of the relationship where we are discussing these issues, issues like the human rights,” he said. The EU also provided support and assistance for civil society organisations and NGOs in those countries, he added.

According to Amnesty International’s report, restrictions on the rights to freedom of expression, assembly and association, introduced in Russia in 2012, were “assiduously enforced and further added to” last year. NGOs were harassed, faced public smear campaigns and pressure to register as foreign agents.

“Several protesters and civil society activists were convicted following unfair, politically motivated trials. Torture and other ill-treatment continued to be used with impunity,” the report said.

The situation in the North Caucasus remained volatile and marred by human rights violations, with no effective legal remedies for victims. Human rights defenders, independent journalists and lawyers continue to face personal risks in their work, it added.

Russia, Turkey and Azerbaijan are members of the Council of Europe. As a result, they can have cases heard against them in the European Court of Human Rights. Russia and Turkey topped the list of number of cases and violations in 2014. 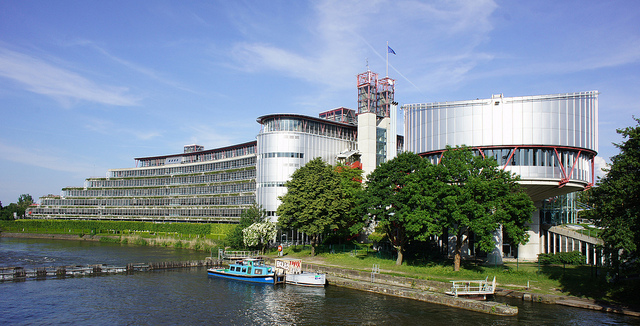 The European Court of Human Rights in Strasbourg.

There were 101 judgments on Turkey in the European Court of Human Rights in 2014. 94 found at least one violation, including seven to rules to safeguard the right to life.

There were 15 cases of inhuman or degrading treatment, 45 breaches of rights to liberty, 31 violations of a right to a fair trial and 24 violation of the right to freedom of expression.

It undermined the independence of the judiciary, introduced new restrictions on internet freedoms and handed unprecedented powers to the country’s intelligence agency.

The rights of peaceful demonstrators were violated and police officers enjoyed near-total impunity for the use of excessive force, according to the report.

Unfair trials continued, especially under anti-terrorism laws, but the excessive use and length of pre-trial detention declined, Amnesty said.

In 2014, the European Court of Human Rights made 11 judgments against Azerbaijan. All found at least one violation of international law. Breaches included the right to liberty and security, the prevention of inhuman or degrading treatment, the right to free elections and freedom of assembly.

Independent journalists continued to face harassment, violence and trumped-up criminal charges, and freedom of assembly remained restricted. There were frequent reports of torture and other ill-treatment, the report said.

Azerbaijan is facing international condemnation on its human rights abuses as well as growing domestic discontent that could affect its stability as a supplier, said E3G’s Bergamaschi.

“Impunity prevailed for perpetrators of gross human rights abuses during the 1990s and torture committed in subsequent years,” the report said, and irregular migrants faced discrimination, abuse and arbitrary expulsion. Armed groups carried out lethal attacks. Death sentences were imposed but no executions were carried out. 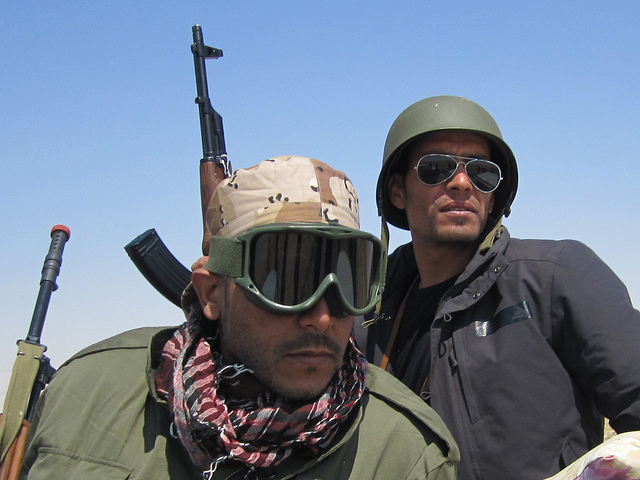 Libyan rebels in 2011. Civil war in Libya could affect Algeria’s ability to supply the EU with gas.

Due to the civil war and terrorist groups in neighbouring Libya, there are questions over Algeria’s ability to supply oil and gas.

Food & Water Europe wrote to national diplomats and the European Commission last year. It warned it was highly unlikely that “the situation in Algeria and Libya will sufficiently stabilise in the short to medium turn to allow exploration efforts to start, especially given that oil and gas facilities are targeted by terrorist groups.”

In January 2013, 39 foreign oil and gas workers were killed at an Algerian gas facility, close to the Libyan border.

Algeria’s gas production has also been declining since 2005, and a lack of investment combined with a 50% increase in domestic demand has led to falling exports over the last decade. Current projections show that Algeria will consume everything it extracts by 2030, becoming a net energy importer soon after, said E3G’s Bergamaschi.

Laws on media and political freedom improved in Turkmenistan, a country with the world’s fourth biggest gas reserves, last year, according to the Amnesty International report.

But the authorities continued to harass journalist and opposition figures and the courts were not independent. Torture and other ill-treatment remained widespread, Amnesty said.

Turkmenistan also faces a growing threat from the Taliban along its 744 kilometer-long border with Afghanistan, according to E3G.

President Gurbanguly Berdimuhamedow has been in power since 2007. He was re-elected in 2012 with 97% of the vote.

In the 2012 Economist’s Democracy Index, Turkmenistan ranked just above Saudi Arabia and Syria. Saudi Arabia, under international criticism for the jailing and public flogging of a blogger, is another EU energy supplier.

Šef?ovi? met the Turkmen ambassador to Brussels on Monday to get a preliminary agreement on an import deal signed soon.