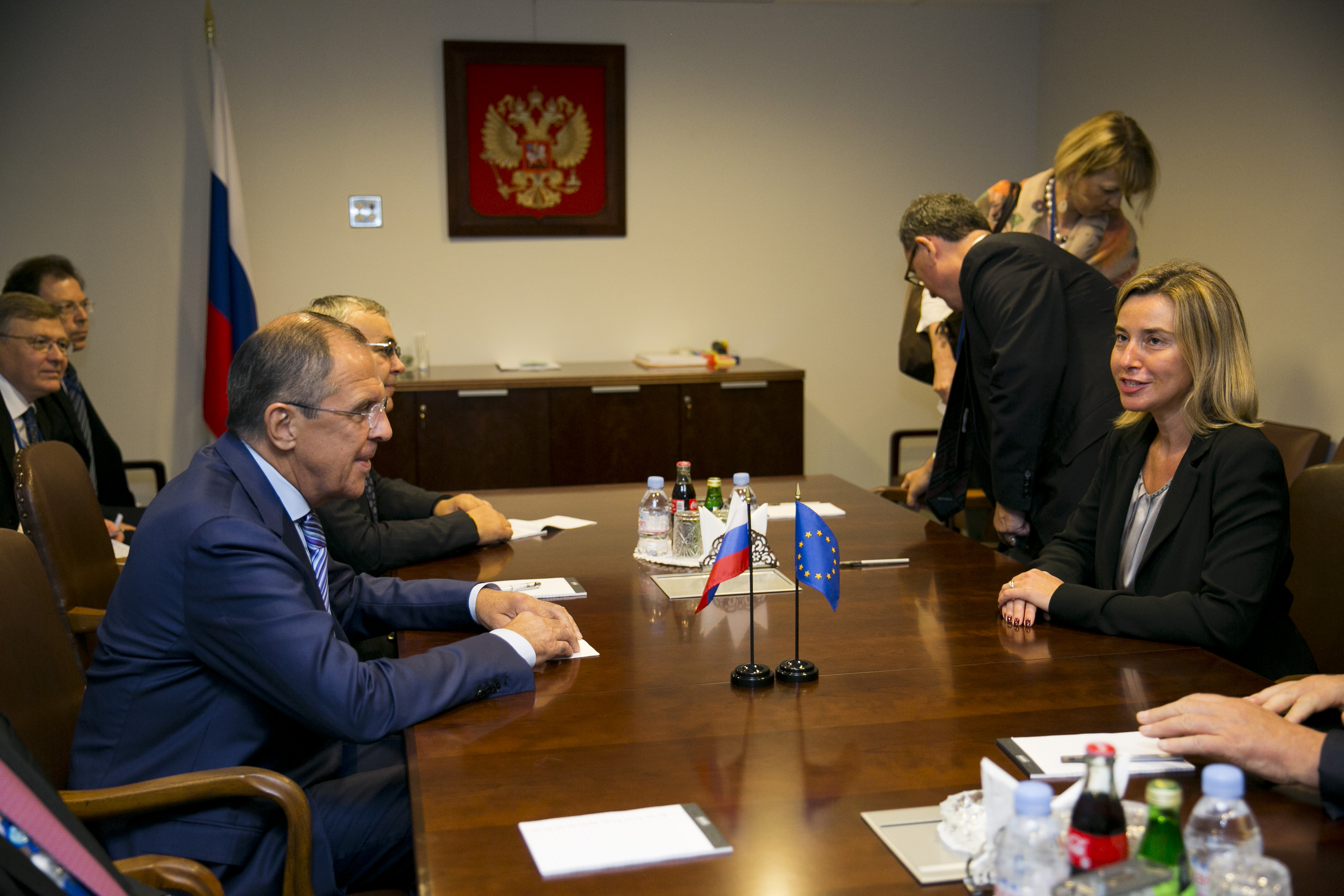 Lavrov and Mogherini met one day before the Russian strikes [Commission]

Although the EU is directly impacted by the Syrian civil war, absorbing hundreds of thousands of refugees fleeing the conflict, the bloc remained silent after Russia launched its biggest-ever military operation in the Middle East on Wednesday (30 September).

Russia commenced air strikes in Syria, having given an hour’s advanced notice. The move has plunged the four-year-old civil war into a volatile new phase, as President Vladimir Putin moved forcefully to stake out influence in the unstable region.

The EU has been unable to adopt a common position on Syria, though France began conducting air strikes in Syria against ISIS this week, and British forces have been involved in US-led operations for a number of months now.

The EU’s foreign affairs chief met Russian foreign Minister Sergei Lavrov on 29 September, but the press release only speaks of the need “to support the UN-led efforts for political solutions” for the crises in Syria and Libya and “to address the humanitarian aspects, including the urgency to manage the refugee and migrant flows”.

Moscow’s assertion that it had hit Islamic State militants was immediately disputed by the United States and rebels on the ground. The attacks also raised the dangerous specter of Washington and Moscow running air strikes concurrently and in the same region, but without coordination, as well as potential dogfights with Israeli aircraft, accustomed to freedom of movement over Syrian airspace.

US Secretary of State John Kerry and Russian Foreign Minister Sergei Lavrov said after talks at the United Nations that they agreed their countries should meet very soon on the Syrian situation.

To “deconflict”, in military parlance, is to ensure that, in this case, Russian aircraft do not accidentally clash in any way with Western warplanes.

A US defense official confirmed that talks between the American and Russian militaries could take place within the next day, possibly via secure video-conference or in person. The Pentagon aimed to involve both civilian and uniformed defense officials in the talks.

The State Department said a Russian diplomat in Baghdad notified the United States of the intended air strikes an hour in advance and warned that American aircraft that have been pressing a daily bombing campaign against Islamic State positions should avoid Syrian airspace.

Kerry said the Russian warning was ignored, and that US air strikes continued on Wednesday.

Putin said he was striking against Islamic State and helping Syrian President Bashar al-Assad, long Russia’s closest ally in the region, in this aim.

But Washington is concerned that Moscow is more interested in propping up Assad, who the United States has long held should leave office, than in beating Islamic State. Assad’s opponents in the brutal civil war include rebel groups that oppose both him and Islamic State and that are supported by the United States and other Western countries.

The Russian defense ministry said it carried out about 20 flights over Syria, hitting eight Islamic State targets and destroying an Islamic State command post and an operations center in a mountainous area, Russian agencies reported.

Syrians living in rebel-held areas of Homs province said the Russian air force unleashed a whole new level of devastation on their towns. Jets flying at higher altitudes than the Syrian air force emitted no noise to alert the people below to raids that were reported to have killed at least 33 civilians, including children, Reuters reported.

Moscow’s intervention means the conflict in Syria has been transformed in a few months from a proxy war, in which outside powers were arming and training mostly Syrians to fight each other, to an international conflict in which the world’s main military powers, except China, are directly involved in fighting.

Russia joined the United States and its Arab allies, Turkey, France, Iran and Israel in direct intervention, with Britain expected to join soon, if it gets parliamentary approval.

US Defense Secretary Ash Carter said of the strikes: “It does appear that they were in areas where there probably were not ISIL forces, and that is precisely one of the problems with this whole approach.” ISIL is one of the acronyms for Islamic State, which has seized control of large areas of Syria and Iraq over the past year.

Western-backed Syrian opposition chief Khaled Khoja said the Russian strikes had killed 36 civilians and no rebel fighters, and accused Russia of seeking only to keep Assad in power.

Danger in the skies

Moscow’s move meant that warplanes from both the United States and Russia will be sharing the skies above Syria.

“I’m especially concerned because there has been no real effort by the Russian side to deconflict the Russian air strikes in Syria with the ongoing US-led coalition fighting ISIL,” NATO Secretary-General Jens Stoltenberg said during a visit to the United States.

Reflecting growing tension between the big powers, Kerry phoned his Russian counterpart Lavrov early on Wednesday to tell him the United States regarded the strikes as dangerous, a US official told Reuters, speaking on condition of anonymity.

White House spokesman Josh Earnest said Russia was moving to “ramp up” support for Assad, adding: “They’ve made a significant military investment now in further propping him up.”

Earnest called it “an indication of how concerned they are about losing influence in the one client state that they have in the Middle East”.

In Moscow, Putin said the air strikes would be limited in scope and that he hoped Assad was ready for political reform and a compromise for the sake of his country and people.

“I know that President Assad understands that and is ready for such a process. We hope that he will be active and flexible and ready to compromise in the name of his country and his people,” Putin told reporters.

Kerry said Washington would have “grave concerns” if Russia hit Syrian targets where Islamic State fighters were not present. Speaking at the UN Security Council, Kerry also reiterated Washington’s view that the militant group “cannot be defeated as long as Bashar al-Assad remains president of Syria.”

Areas of Homs province struck by the Russians are controlled by an array of rebel groups including several operating under the banner of the “Free Syrian Army,” activists, locals and rebels said.

The Homs area is crucial to Assad’s control of western Syria. Insurgent control of that area would bisect the Assad-held west, separating Damascus from the coastal cities of Latakia and Tartous, where Russia operates a naval facility.

The Russian air strikes came two days after Putin met with US President Barack Obama at the United Nations and the two agreed their armed forces should hold talks to avoid coming into conflict in Syria.

Russian jets went into action after the upper house of the Russian parliament gave Putin unanimous backing for strikes following a request for military assistance from Assad.

Putin said Russia’s military involvement in the Middle East would involve only its air force and would be temporary. One of the reasons for getting involved was the need to stop Russian citizens who had joined the ranks of Islamic State from later returning home to cause trouble, he said.

Russia has been steadily dispatching military aircraft to a base in Latakia, regarded as an Assad stronghold, after the Syrian government suffered a series of battlefield reverses.

Russia’s involvement in Syria will be a further challenge for Moscow, which is already intervening in Ukraine at a time when its own economy is suffering from low oil prices and Western sanctions.

At least 200,000 people have been killed and millions driven from their homes since the civil war began in 2011 when Assad’s forces moved to crush peaceful protests against his family’s four-decade rule.

The ALDE Group in the European Parliament urges High Representative, Federica Mogherini and President of the European Council, Donald Tusk, to take all the necessary steps to find a common EU position on how we should solve the situation in Syria.

Following the failure of the UK, France and Germany to agree a common position on Syria, the President of the ALDE Group, Guy Verhofstadt, said:
"It is unacceptable and disappointing to see that while Russia and China are increasing their military presence in Syria and as the US reconsider their approach, there is no leadership to be seen on the EU side, just divisions among different Member States.”

MEPs will have a debate on the situation in Syria with the Commission and the Council, next week in Strasbourg, during the Plenary Session of the European Parliament.

0 responses to “EU silent as Russia intervenes in Syria”