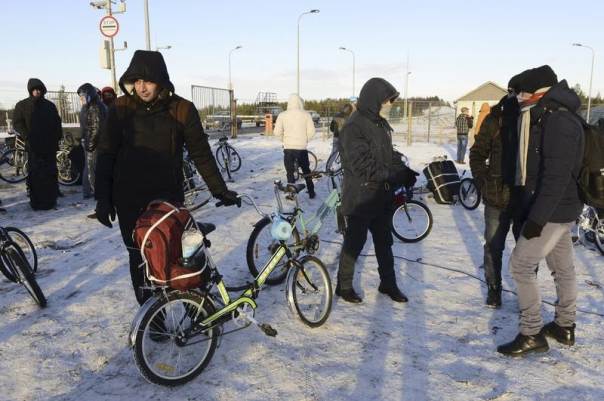 An increasingly popular route for migrants to cross Russia and into Norway has Oslo angered and worried as winter approaches, while commentators suspect Moscow is deliberately creating problems for its neighbour.

Since the start of the year, around 4,000 asylum seekers have made a long detour through the far north to cross the border between Russia and Norway, which is a member of the Schengen agreement on free movement even though it is not a member of the European Union.

By comparison, only 10 asylum seekers made the crossing last year.

That Russia allows asylum seekers to cross the highly-militarised region is sometimes seen by Norwegian commentators and media as a bid by Moscow to destabilise its smaller neighbour.

Thomas Nilsen, editor-in-chief of the online regional newspaper Independent Barents Observer, says it is “a provocation” decided “high up in Moscow”, which he suggested could be aimed either at showing its muscle, punishing Oslo for adopting European sanctions against Moscow over Ukraine, or to create divisions in Norway.

With the Ukraine crisis as a backdrop, journalist Kjetil Stormak, a defence specialist, meanwhile contends it is “a hybrid war”, or a stealth aggression against NATO-member Norway.

While the number of asylum seekers remains small compared to the hundreds of thousands of migrants who risk their lives crossing the Mediterranean, their number is steadily rising.

Initially, the news that migrants were making a long detour through the Arctic had a whimsical quality to it: migrants have to make the last section of their journey by bicycle because Russian authorities don’t let pedestrians cross the border and Norway considers it human trafficking to transport migrants in a vehicle.

But the issue has since taken on a diplomatic dimension.

Noting that neighbouring Finland, a member of the EU but not of NATO, has received almost no migrants via Russia, Oslo asked Moscow for an explanation but has not received a “satisfactory response,” Norwegian authorities said.

On Tuesday, the Russian embassy in Oslo said “foreign nationals (were) free to choose the border crossing and the country of their choice when they leave the Russian Federation.”

Their choice is “very probably governed by the liberal asylum policy, the attractive living conditions and social benefits,” in Norway, it wrote on Facebook.

The Norwegian government has so far ruled out closing its border, despite calls by some in Norway to do so. Such a move would likely anger Moscow.

But Norway wants to quickly find a solution.

Refugees “have seen this as a safe route to Europe now. That will change now when the winter is coming,” Joran Kallmyr, state secretary in the Justice Ministry, said.

“This can be an extremely dangerous route, even more dangerous than crossing with a boat in the Mediterranean,” he said, citing the risk of sudden snowstorms that could prove potentially fatal for cyclists.

The remote region was not prepared for such an influx of refugees, but on Wednesday, Norwegian authorities inaugurated a transit centre with 600 spots, in a former military garrison just outside the town of Kirkenes.

“I came through Russia because it’s the easiest way,” Rehman, a 34-year-old Pakistani told AFP on Wednesday, shivering in the minus eight degree Celsius temperatures and asking for a hat.

But primarily, they would like to quickly send back to Russia those asylum seekers who have been granted residency or a visa in Russia, arguing that it is a safe country for them.

But Oslo is uncertain how Moscow will react to that.

Some migrants who have recently arrived in Norway – especially Afghans, who have outnumbered Syrians of late – were handed expulsion orders from Russia, making it impossible for Norway to send them back there.

Norway has taken to social media to inform Afghan asylum seekers that their chances of getting residency on its soil are very limited, and is now warning them not to give up their residency status in Russia since it now plans to expel rejected asylum seekers to Kabul.