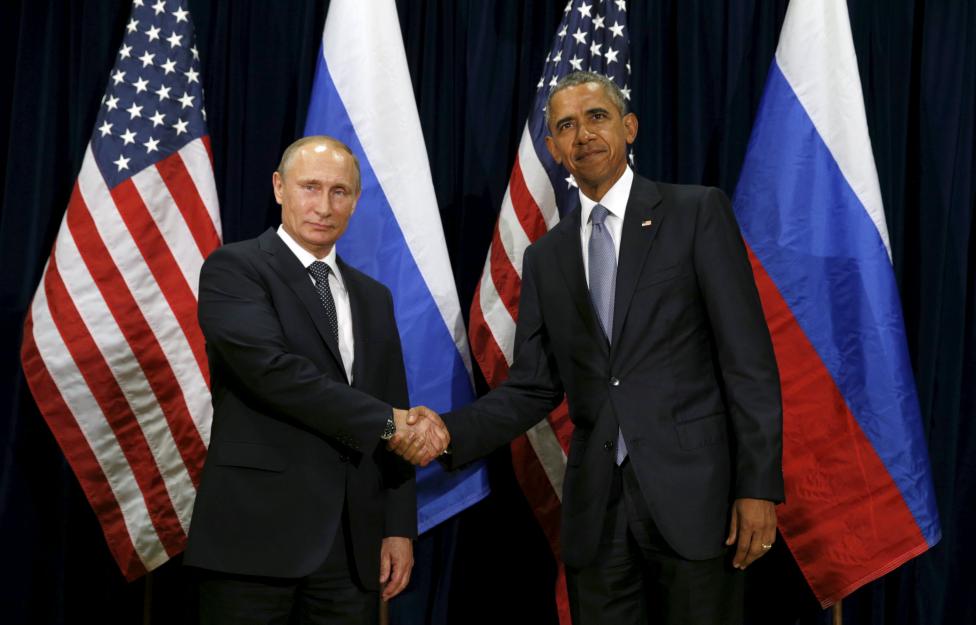 Putin and Obama at the UN [Reuters]

Russia and the United States agreed on Monday (28 September) to look for a diplomatic end to the Syrian civil war, but clashed over the central question of whether Syrian President Bashar al-Assad should retain power.

During a 90-minute meeting, US President Barack Obama and Russian President Vladimir Putin agreed that their armed forces should hold talks to avoid coming into conflict in Syria after a Russian military buildup there over the last several weeks.

The United States, France and allied countries are bombing Islamic State militants, who have exploited power vacuums to seize parts of Syria and neighboring Iraq as part of a stated goal of creating an Islamic caliphate.

The reinforcement of the Russian military presence in the country, including the addition of tanks and warplanes, has brought fears of inadvertent or accidental clashes among the forces as well as US questions about Moscow’s main goal.

>> Read: US: Russian action in Syria could increase refugee flows

Speaking after his meeting with Obama, Putin told reporters Russia was pondering what more it could do to support Syrian government and Kurdish forces against Islamic State militants.

“We are mulling over what we would really do extra in order to support those who are in the battlefield, resisting and fighting with terrorists, ISIS (Islamic State) first of all,” Putin said, ruling out deploying Russian ground troops.

“There is (an) opportunity to work on joint problems together,” Putin said of his talks with Obama, which an American official described as “businesslike.”

US-Russian ties have been deeply strained by Moscow’s March 2014 annexation of Crimea from Ukraine, and its support of pro-Russian separatists in the eastern part of the country.

Earlier in the day, relations between the two leaders appeared frosty. They clinked glasses at a lunch, but Obama had a piercing look as Putin smiled – and they laid out starkly differing positions toward Assad in their addresses before the annual United Nations General Assembly gathering of world leaders.

Obama said he was willing to cooperate with Russia and Iran to try to end the four-year civil war in Syria, in which at least 200,000 people have died and millions have been driven from their homes. But he described Assad as its chief culprit.

In contrast, Putin said there was no alternative to cooperating with Assad’s military to fight Islamic State militants, and called for the creation of a broader international coalition, similar to the one against Hitler during World War II. This appeal may compete with the coalition that the United States has assembled to fight Islamic State.

“The United States is prepared to work with any nation, including Russia and Iran, to resolve the conflict,” Obama, who spoke before Putin, told the world body. “But we must recognize that there cannot be, after so much bloodshed, so much carnage, a return to the prewar status quo.”

Obama: No role for tyrants

Obama did not explicitly call for Assad’s ouster, and he suggested there could be a “managed transition” away from the Syrian president’s rule, the latest sign that despite Washington’s animus toward Assad, it was willing to see him stay for some period of time.

Obama dismissed the argument that authoritarianism was the only way to combat groups such as Islamic State, saying: “In accordance with this logic, we should support tyrants like Bashar al-Assad, who drops barrel bombs to massacre innocent children, because the alternative is surely worse.”

Putin differed, suggesting there was no option but to work with Assad, a longtime ally of Russia.

“We think it is an enormous mistake to refuse to cooperate with the Syrian government and its armed forces who are valiantly fighting terrorism face-to-face,” Putin said in his speech.

“We should finally acknowledge that no one but President Assad’s armed forces and (Kurdish) militia are truly fighting the Islamic State and other terrorist organizations in Syria,” he said.

In voicing a willingness to deal with Iran and Russia, both backers of Assad, Obama was openly acknowledging their influence in Syria and swallowing a somewhat bitter pill for the United States.

Tehran has armed the Syrian government and, through its backing of Lebanese Hezbollah fighters, has helped Assad combat rebels seeking to end his family’s four-decade rule.

US officials say they believe Putin’s buildup of Russian forces in Syria mainly reflects Moscow’s fear that Assad’s grip might be weakening and a desire to shore him up to retain Russian influence in the region.

They also see it as a way for Putin to try to project Russian influence more widely, a goal he appeared to achieve on Sunday with Iraq’s announcement that Russia, Iran, Syria and the Iraqi government were sharing intelligence on Syria.

Despite their differences over Syria and Ukraine, the United States and Russia have worked with Britain, China, France and Germany, a group known as the P5+1, to secure a nuclear deal with Iran this summer.

The same group could also take up the issue of Syria, the European Union’s foreign policy chief, Federica Mogherini, said after a meeting of the six foreign ministers and Iran on Monday evening.

In the coming days, France will discuss with its partners a proposal by Turkey and members of the Syrian opposition for a no-fly zone in northern Syria, Hollande said on Monday in New York.

Struggling with more than 1.8 million Syrian refugees, Turkey has long campaigned for a no-fly zone in northern Syria, to keep Kurdish militants from its border, and help stem the tide of displaced civilians trying to cross.

France has also previously pushed the idea which has gained some traction in Europe, with hundreds of thousands of Syrian, Iraqi and Kurdish refugees fleeing the region to Europe, with little hope of seeing an end to the crises.

French Foreign Minister Laurent Fabius “in the coming days will look at what the demarcation would be, how this zone could be secured and what our partners think,” Hollande told reporters on the sidelines of the annual United Nations General Assembly.

“Not only would it protect those living in these zones, but, and this is the idea behind it, refugees could return to this zone,” Hollande said.

Hollande said such a proposal could eventually be rubber-stamped with a UN Security Council resolution that “would give international legitimacy to what’s happening in this zone.”

Security Council diplomats have said that Russia would not support any such resolution.

“Turkey suggests forming a safe zone for refugees,” a senior Turkish official said. “Otherwise a new wave of refugees will probably become inevitable. This issue has to be resolved within Syria,” the official said, also calling on partners the UN, European Union and the United States “to focus on the root cause.”

Turkey and the United States said in July that they were working on plans to provide air cover for Syrian rebels and jointly sweep Islamic State fighters from a strip of land along the Turkish border, bolstering the NATO member’s security and possibly providing a safe haven for civilians.

The size and scope of a zone along the border was under discussion, US officials have said, but Washington ruled out jointly imposing a formal no-fly zone. It said the plan with Turkey was not aimed at creating a “safe zone” for refugees. Washington is also concerned that Turkey would use such a zone to attack Syrian Kurdish forces, which have been instrumental in fighting ISIS in the country.