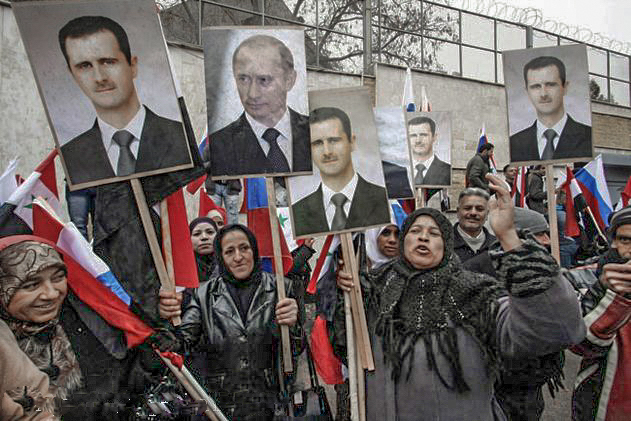 Syria has been a client state of Russia for over five decades. [Freedom House/Flickr]

The United States believes that Russia has started carrying out air strikes in Syria in the vicinity of Homs, a US official told Reuters on Wednesday (30 September), adding that Moscow gave the United States a one-hour advanced notice of its operations.

The official, who spoke on condition of anonymity, said the information on the air strikes was preliminary and declined to give any details, including on the number of strikes, or the aircraft used.

The US military’s Central Command did not immediately respond to a request for comment.

The move, which sets the stage for Russia’s biggest play in the region since the 1991 collapse of the Soviet Union, was announced as Syrian government warplanes conducted heavy strikes in Homs province and the United States and its allies struck Islamic State targets.

Russia, which has been steadily dispatching more and more military aircraft to a base in Latakia, declined to say when it would launch its own strikes, but made it clear it too would be targeting Islamic State militants.

As part of its preparations, Moscow has already sent military experts to a recently established command centre in Baghdad which is coordinating air strikes and ground troops in Syria, a Russian official told Reuters on Wednesday.

The Russian Defence Ministry said the centre is used to share information on possible air strikes in Syria.

Sergei Ivanov, the Kremlin’s Chief of Staff, said Russia’s missions would be limited, and precluded the use of ground troops.

“As our president has already said, the use of ground troops has been ruled out. The military aim of our operations will be exclusively to provide air support to Syrian government forces in their struggle against ISIS (Islamic State),” he said.

The decision to get involved militarily in Syria will be a further challenge for Moscow, which is already intervening in Ukraine at a time when its economy is suffering from low oil prices and Western sanctions.

A US-led coalition has already been bombing Islamic State in Iraq and Syria, but Russia has been highly critical, saying it has only yielded meagre results so far. France announced at the weekend that it had launched its first air strikes in Syria.

Ivanov said the upper house of parliament had backed military action by 162 votes to zero after President Bashar al-Assad had asked for Russian military assistance.

The Syrian presidency confirmed that in a statement, saying Assad had written to Putin and Russia was increasing its military support as a direct result of that appeal.

Ivanov said Russia was only acting to protect its own interests in Syria, where it maintains a Soviet-era naval facility at Tartus, its only access to the Mediterranean.

“We’re talking specifically about Syria and we are not talking about achieving foreign policy goals or about satisfying our ambitions … but exclusively about the national interests of the Russian Federation,” said Ivanov.

Russian military action would not be open-ended, he added, declining to say which aircraft would be used and when.

“The operations of the Russian air force can not of course go on indefinitely and will be subject to clearly prescribed time frames.”

Russia’s decision to intervene in Syria was prompted by a panicky realisation that the Syrian government was being turned over on the battlefield, diplomats have told Reuters.

When it saw several months ago that Syrian government forces were retreating on several fronts at a rate that threatened Assad, its closest Middle East ally, the Kremlin quietly decided to despatch more men, weaponry and armour, diplomats and analysts told Reuters.

Putin’s spokesman said the vote by the Federation Council, Russia’s upper house of parliament, meant Moscow would be practically the only country in Syria to be conducting operations “on a legitimate basis” and at the request of “the legitimate president of Syria”.

Analysts said Putin needed to get parliament’s backing to ensure that any military operation was legal under the terms of the Russian constitution.

“If there will be a united coalition which I doubt, or in the end two coalitions — one American and one Russian — they will have to coordinate their actions,” Ivan Konovalov, a military expert, told Reuters.

“For Russian forces to operate there legitimately … a law was needed.”