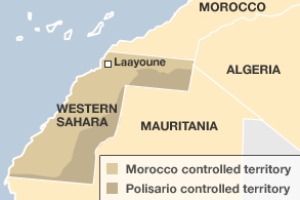 A Moroccan solar project worth some €6.6 billion aimed at turning desert sun into lucrative power exports to Europe could be at risk as international lenders balk at plants planned for the disputed Western Sahara.

Morocco drew up plans in 2009 to build solar plants and wind farms to generate 4 gigawatts of power by 2020 but much of that output is to come from sites planned in Western Sahara, the focus of a decades-old territorial dispute.

Morocco has controlled most of Western Sahara since 1975 and claims the sparsely populated stretch of desert, which has offshore fishing, phosphate reserves and oilfield potential, as its own.

However, the Algeria-backed Polisario Front seeks independence and a United Nations mission was formed more than 20 years ago ahead of an expected referendum on Western Sahara's political future which has never taken place.

The dispute was rekindled in October when Morocco recalled its ambassador from Algeria after that country's president upset Rabat by calling for human rights monitors to be sent to the region.

Western Sahara has also drawn scrutiny as European and U.S. authorities worry that damaged relations between Morocco and Algeria could hurt cooperation against Islamist militants who are active across the Maghreb.

Morocco's plans call for building five solar power plants, including two in Western Sahara – a 500 megawatt (MW) plant at Foum El Oued and a 100 MW plant near Boujdour. Another 500 MW project is planned at Sabkhat Tah which borders Western Sahara.

Yet lending sources at German state-owned bank KFW, the World Bank, the European Investment Bank, and the European Union have told Reuters they will not finance projects based in Western Sahara.

"If we support those investments, it would look like we are supporting the Moroccan position. We are neutral regarding that conflict," one senior bank source said.

A second source said: "We have never supported any project in that territory (Western Sahara), and we won't, although the Moroccan solar plan means a lot for us."

All the sources declined to be named because of the political sensitivity of the matter.

Progress on the solar projects has so far been limited to one site within Morocco where Saudi Arabia's ACWA > is building a 160 MW solar plant in the city of Ouarzazate.

MASEN, Morocco's solar energy agency, plans to launch tenders soon for construction of two more plants worth €1.7 billion – one of 100 MW and another of 200 MW – also near Ouarzazate.

Germany's KFW backed a €654-million loan in October to part-finance these.

Mines and Energy Minister Abdelkader Amara said Morocco dismissed concerns over financing though he acknowledged plans for Western Sahara were not yet finalised.

"In the initial plan, three solar power plants of five are based in the southern provinces (Western Sahara), but we have not yet decided all those areas yet," he said.

"If those institutions say that they would not finance them, we will see at the time."

Sources say Morocco may seek alternative bilateral financing from Arab Gulf states already invested in the kingdom if KFW and others balk at backing the sites planned for Western Sahara.

But they say these investors may also be skittish over such investment and would be unlikely to finance the whole of it.

While rights groups such as Amnesty International accuse Morocco of continuing to use excessive force against activists and repressing political freedom in Western Sahara, Rabat invests heavily there hoping to calm social unrest and independence claims.

Yet any investment involving international firms stirs protests over the legitimacy of Moroccans to negotiate on behalf of the Western Saharan population.

Morocco's official media portrayed the EU fishing deal as a political victory while the Polisario Front dubbed it a violation of international law.

"We respect international laws. We have started oil exploration and have signed a fishing agreement with the European Union," Amara said.

"So I don't see why we could not get the financing needed for those solar power projects."

Moroccan lawmakers drew up a renewable energy law in 2009 which helped attract foreign investors including German industrial and financial firms which set up the north Africa-focussed Desertec Industrial Initiative (DII).

However, some members have since quit the DII, including manufacturers Siemens and Bosch, and European efforts to bolster production of renewable energy have reduced Europe's need for potential North African imports.

Morocco has domestic demand for such power, however, as the country remains heavily reliant on energy imports.