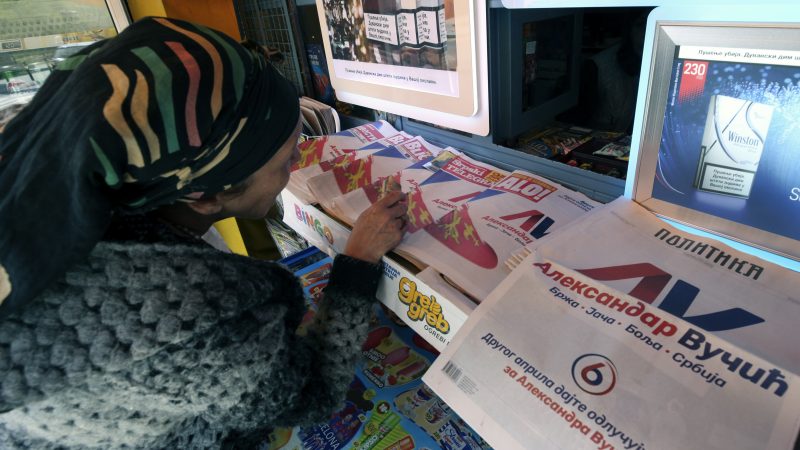 An elderly woman buys a newspaper at a Belgrade kiosk, with all newspaper titles inviting to vote for Aleksandar Vucic, ahead of the 2017 Serbian presidential election. [Koca Sulejmanovic/EPA/EFE]

According to the Reporters Without Borders (RSF) report, Serbia is a country “with weak institutions that is prey to fake news spread by government-backed sensational media, a country where journalists are subjected to almost daily attacks that increasingly come from the ruling elite and pro-government media”.

The report mentions that Serbia retains 93rd place in the world in terms of media freedom. The NGO also points out that the Belgrade government used the coronavirus crisis to pass a draconian law which, though later repealed, was used to detain the journalist Ana Lalić in April 2020 for reporting information about a local hospital.

The report also suggests that during anti-government demonstrations, journalists were abused by both demonstrators and police, but most of the cases went unnoticed.

The report also notes that the Serbian Court of Appeal cancelled the sentences for the murder of Slavko Ćuruvija, owner of the Dnevni Telegraf newspaper and ordered the case to be heard again. Ćuruvija was killed in 1999 by former President Slobodan Milošević’s secret police.

Meanwhile, in the new annual report of the US government-funded Freedom House, Serbia is placed in the category of hybrid regimes. The report highlights that there is regression in terms of democratic governance at the national level.

The democracy watchdog wrote that the Serbian parliamentary elections in June 2020 were held without real competition and the result was a de facto one-party state.

“In Serbia, President Aleksandar Vučić and his Serbian Progressive Party (SNS) have overseen the mainstreaming of smear campaigns and pro-government propaganda, which contributed to the SNS’s sweeping election victory and the formation of a non-representative parliament in 2020”, Freedom House stated.

Freedom House cut Serbia’s rating in the category Electoral Process from 4.50 to 4.25 due to changes in electoral law, made by the ruling party before the parliamentary elections, and because most of the opposition parties boycotted the elections.

For the second year in a row, Serbia has not entered the category of democracies, the report stated.

President Vučić has 38% more media time than Prime Minister Ana Brnabić and the entire Serbian government combined, according to an analysis of national news broadcasts conducted by the Serbian Bureau for Social Research (BIRODI), published on 28 April. However, the media in Belgrade paid little attention to it.

“The established permanent rule – Vučić’s media inviolability – is being confirmed on this occasion, too. It has turned out that he has made more appearances in the media outside the pre-election period than was the case in last year’s election campaign”, said the report, which examined the period between 1 December 2020 and 15 April 2021.

Researchers discovered that, along with his  41 hours of media presence, Vučić also projected the most positive image. The analysis found that the opposition parties, besides being less represented with just 6 hours and 45 minutes of airtime, were also being shown in an obviously more negative light.

“This conclusion is especially true for those opposition parties which have boycotted the last parliamentary elections. Within this group of parties, the Party of Freedom and Justice (SSP) and Dragan Đilas were shown mostly in a negative light, primarily thanks to TV Pink“, the report said. TV Pink is the leading commercial television in Serbia, owned by businessman Željko Mitrović.

A recent example of media servility in Serbia is Vučić’s visit to Brussels on 20 March. While foreign media focused on the criticism from the EU institutions, Serbian media declared the visit to have been particularly successful.

EU chief diplomat Josep Borrell told Vučić that the EU expects Serbia to meet its reform agenda, particularly in regard to the rule of law and media freedom. However, the Serbian press chose to focus on the Belgrade-Skopje railway project, which the EU is ready to support.

Meanwhile, government-friendly commentators appear always ready to give their support.

Suzana Grubješić, deputy chairwoman of the Center for Foreign Policy, told the Blic newspaper that Vučić’s visit to Brussels was “very successful”, arguing that the main outcome of the visit was that Serbia’s European path would be accelerated and the new, revised enlargement methodology implemented.

Serbian media find no place for European analysts, who are concerned that under Vučić’s leadership, Serbia is increasing its ties with Moscow and Beijing.

The geopolitical tug-of-war is presented by the Serbian press as healthy competition. Politika commented that the EU had taken a point ahead of China with the Belgrade-Northern Macedonia railway project.

“The EU has achieved this by offering €700 million in grants to finance the renovation and construction of the railway. The EU has become a true competitor and is pushing away the Chinese, who have already entered this business’, the daily newspaper commented.