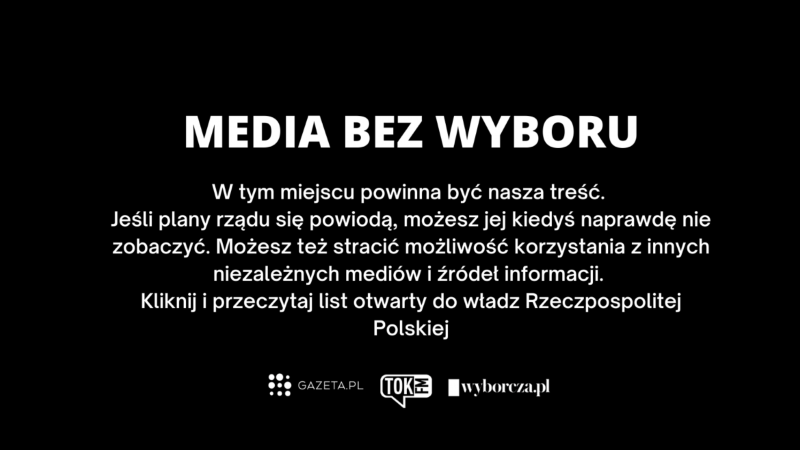 The blackout came a day after many publishing groups objected to the planned tax in an open letter to authorities and political leaders.

Poland’s Law and Justice government said the tax is meant to help raise funds for healthcare and culture, both hit by the coronavirus pandemic.

Channels from major private TVs in Poland broadcast a black screen with a white inscription “This was supposed to be your favourite program”. Private radios broadcast messages like “Ladies and gentlemen, you will not hear any normal programme today”.

All the major press publications published a black cover carrying a huge “Media without choice” slogan and an appeal to defend the media freedom.

“The ad tax is a powerful blow to free media. Most of them rely on advertising revenue for their livelihood. The authorities will thus thwart costly investigations, do away with laborious fact-checking and stifle criticism. This is how Orbán got rid of free media in Hungary,” wrote Wyborcza.pl, EURACTIV media partner.

What is the media tax?

Last week, a bill on additional revenues for the National Health Fund, the National Fund for Monument Protection and the establishment of a Fund for Support of Culture and National Heritage in the Media Area was added to the government’s legislative agenda.

The outcome of the bill, if approved, will be a levy imposed on media organisations that should take effect from 1 July and will cover contributions from conventional advertising (radio, television, press, outdoor advertising and cinemas) and from online advertising.

Half of the revenue is to go to the National Health Fund (NFZ).

“For a long time, there has been a discussion in the EU about regulations concerning, among other things, fair taxation of digital internet giants. This discussion has unfortunately been significantly prolonged.”

“As a result, Poland, like several other European countries, has proposed national tax solutions. It should be emphasised that this concerns the largest entities on the advertising market,” he said.

According to him, the bill is primarily aimed at international tech giants such as Google or Facebook.

According to experts, the “contribution” will particularly hit the media of Agora publishing house, the owner of the biggest Polish broadsheet “Gazeta Wyborcza”, and TVN of the American Discovery Group.

Both publishers have been strongly criticised by the politicians from the ruling coalition and by the Polish Television (TVP), which is widely seen as the mouthpiece of the PiS government.

Who will be affected by the media tax?

The tax on internet advertising will apply if the revenues of a website or portal amount to at least €750 million globally, and if advertising revenues in Poland exceed PLN 5m. Both conditions must be met at the same time, and the tax will amount to 5% of the base of these incomes.

This means the tax will hit tech giants but will not affect the majority of Polish websites and online services.

At the same time, the tax on conventional advertising will depend on the type of media and advertising revenues. If a publisher’s revenues are between PLN 15 million and 30 million, they will pay a 2% tax.

Other media that broadcast advertisements, such as radio and television, as well as cinema chains and outdoor advertising companies, will pay 7.5% tax if their revenues do not exceed PLN 50 million or 10% if they do.

Media that broadcast advertisements of selected products and services indicated by the legislator as harmful, e.g. gambling games or sweetened beverages, will pay a higher tax

*The open letter by Polish publishers and broadcasters can be found below, in the ‘Further reading’ section.

LETTER OF BROADCASTERS AND PUBLISHERS REGARDING THE "SOLIDARITY TAX".

We address the issue of the announced new additional burden on the media operating on the Polish market, misleadingly called the "contribution" introduced under the pretext of COVID-19.

It is simply a harassment hitting Polish viewers, listeners, readers and Internet users, as well as Polish productions, culture, entertainment, sports and media.

The asymmetrical and selective charging of individual companies is also scandalous. In addition, it is unacceptable in a state governed by the rule of law to attempt to change concession conditions during their period of validity.

As the media operating in Poland for many years, we have not compromised on our duties and social responsibility. Every year we pay an increasing number of taxes, levies and charges to the state budget (CIT, VAT, emission fees, copyright management organisations, concessions, frequencies, booking decisions, VOD fee, etc.). We also support the most vulnerable groups in our society with our own charitable activities. We support Poles, as well as the government, in the fight against the epidemic both informally and by allocating resources worth hundreds of millions of zlotys.

We are therefore firmly opposed to the use of the epidemic as an excuse to introduce yet another, new, exceptionally heavy burden on the media. A permanent burden that will survive the COVID-19 epidemic.

Signatories of the letter