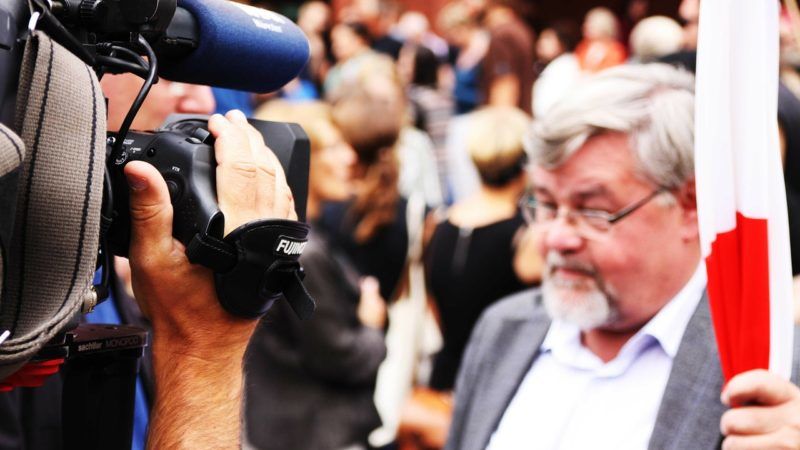 The Polish media is facing a number of challenges, ranging from political to economic pressures. [Pixabay]

The Polish media sector is struggling to innovate under increasing government pressure. Three leading publications from different parts of the political spectrum explained some of these tensions during the #Media4EU series.

Poland is in the eye of the political storm. From controversial media laws to an arm wrestle with the EU institutions and a failed attempt to block the reappointment of Donald Tusk as Council president, critics see the actions of the ruling Law and Justice party (PiS) as a threat to democracy.

Last December, the Polish government attempted to restrict media access to the National Assembly but it was forced to lift the curbs due to massive protests and pressure by civil society and opposition forces.

In January, a series of measures tightening the control of the government on public broadcasters was signed into law by President Andrzej Duda.

Under these new provisions, the hiring and firing of senior staff working for public radio and TV in Poland will be decided by the treasury minister, instead of through contests organised by the National Broadcasting Council. The law also does away with the current management of all public TV and radio services.

Even before Donald Tusk’s reappointment, the Polish government came under fire over press freedom and judicial independence, and the Polish interviewees of the #Media4EU series revealed the sector’s polarisation.

This difference of opinion reported by euractiv.com created a major buzz in Poland and was cited by the house news service of America’s far-right, Breitbart.

The former Polish prime minister was confirmed on 9 March during the latest EU summit, even though the PiS government staunchly opposed his reappointment.

But back in November, Paweł Lisicki – editor-in-chief of Do Rzeczy, one of Poland’s most right-wing publications – said: “I actually believe that it is better for Poland to have Mr Tusk as president of the European Council. I don’t support the government trying to get rid of Tusk, I think it’s not quite reasonable.”

Confronted with government pressure on its revenue sources and on its access to politicians, the left-leaning Polish newspaper Gazeta Wyborcza is looking to Brussels support to press freedom and plurality.

The paper’s news editor Roman Imielski, stressed that “If we talk about the future of democracy it is very important to have a media sector which informs about the world and doesn’t spread fake news.

Gazeta Wyborcza alleges that the government discourages Polish companies from taking out adverts in its pages, putting the newspaper under significant strain.

That is why Imielski calls on the institutions to set up a system of indirect support for media organisations in difficulty, insisting “direct subsidies won’t work, but […] I think having a special fund, some kind of European fund for the media, is a very good idea.

“For example, our newspaper is the largest broadsheet in Poland and we are having revenue problems because of the public boycott we talked about before, so we should have the possibility to apply to this fund for help.”

Gazeta Wyborcza: 'EU should set up some kind of European fund for the media'

Poland’s largest broadsheet newspaper is struggling as a result of a Polish government “boycott” which cut off both public and private funding, warns the online editor of Gazeta Wyborcza, who calls on the European Union for help.

However, Gazeta Wyborcza’s statements to EURACTIV have incurred some pushback from right-wing pundits, not only in Poland but also from all the way across the Atlantic. Calling out the paper’s losses as a failure to adapt to the era of social media era, Breitbart also disclosed its ties to media magnate George Soros.

Bogusław Chrabota, editor-in-chief of the centre-right Polish daily Rzeczpospolita, also dismissed Imielski’s claims of political pressure on the private media sector. He said that “we have a formal and material guarantee of freedom of speech in this country, and I don’t have the feeling that there are any dangers to our operations. […] However, I’m just talking about private media.

“Public media companies are 100% controlled by the governing powers and they are very much engaged in the political fight in Poland to support the government against the opposition.”

The newspaper has experienced a 20% cut in its revenue sources after the new Polish government blocked public companies’ financing of news outlets but thanks to a diversified revenue model, Rzeczpospolita has suffered less than other publications.

According to Chrabota, “Gazeta Wyborcza is on a barricade […] The problem is that they lost maybe 50 or 60% of their income, while in our case we also lost a lot of but we have another business model so it’s better for us.”

The two dailies have positioned themselves differently, both from an ideological and financial point of view. However, they agree that the EU institutions should support media innovation.

Chrabota explained that he “cannot imagine direct subsidies working in Poland because we don’t have such a tradition like in France, for example. However, I would welcome making some progress in assuring us about authors rights in Europe and also perhaps establishing funds for innovation in order to help us compete with big groups from the States.”

But opinions regarding this topic are split: although conservative weekly Do Rzeczy may benefit from closeness to the Polish government, Editor-in-Chief Paweł Lisicki has spoken out against any public intervention in the sector.

“I believe that it’s too dangerous to subsidise the media, because in that way they are dependent on particular parties. I would prefer to keep the political power as far away from the media as possible,” he warned

Denying any tangible relations between the paper and the government, Lisicki also rejected claims that press freedom is under attack in Poland. Instead, he maintains that Polish governments have always played favourites with the media, but major news outlets are denouncing the practice only now because they are part of the opposition.

“The difference is that those in traditional media which are now hit by these policies were supported by the previous government,” Lisicki said.

Even though Rzeczpospolita‘s Chrabota doesn’t believe the Polish private sector is at risk yet, he also warned about potential developments.

“What we need is that Brussels exercises a permanent pressure on the guarantees of freedom of the media and of expression in this country. If the European institutions don’t pay attention I think that the governing power will be much more open and free to change our press environment in the worst direction,” he concluded.